There is a lot of fuss made in the guitar community about so-called ‘vintage’ guitars, ‘vintage’ being another word for ‘old’. There is a certain part of our world that longs to play a 30-, 40-, or even 50-year-old guitar or bass for a variety of reasons. To be honest, there is something to this argument when it is applied to instruments that truly are products of what many to be the ‘golden era’ of guitar production in the USA which, if we combine acoustic and electric guitars, would be roughly from the 1920’s to about 1970.

Guitars made during that time were made from old growth wood, the kind that doesn’t really exist anymore, which many feel accounts for much of the “X Factor” people seek in older instruments. They were also made with much more hand work and in lower quantities than guitars are made in these days. 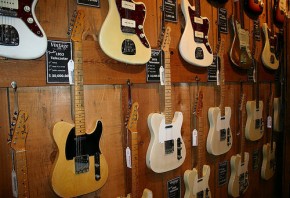 Finally, these were the instruments played by the people who developed the musical styles we have come to know and love, as they were the only ones available at the time. Sure, there were good ones and band ones coming out of the guitar factories back then just like now, but, if you ever get your hands on one of the good ones, you start to understand a bit about why people seek this stuff out.

What I personally don’t understand is the increasing fervor and prices of post-1970 guitars and basses. As the 1970’s progressed, many of the things that made the older guitars important were lost to corporate buyouts, a push for quantity over quality, and a general decline in American industry. Add in the availability of imported guitars that were being built better with each passing year, and it is easy to understand the decline of our beloved guitar companies. The sick thing is these guitars are now starting to command prices that were unthinkable 15 or 20 years ago.

When I first started doing guitar shows in the early 1990’s, prices on the good stuff were still fairly reasonable so no one much cared about 70’s axes. We would routinely laugh guys out of our booth at the shows with their 1979 Strats that were only going for $500 or $600. Now, due to incredibly inflated prices on real ‘vintage’ instruments (30 grand for a guitar? Really?), that same ’79 Strat is going $1500 or more.

The funny thing is it’s still the same instrument that it was when it was less than half the price, with the same 3-bolt design, thick poly finish, and a too-heavy body. The late 1970’s was the low ebb of American guitar production and, while there are some that are good players, generally guitars from this period are the lowest quality instruments built in the 20th century and have very little in common with the guitars that made companies like Fender and Gibson great other than the name on the headstock. This very thing, more than any other factors, made players start to buy up older guitars as they knew the older ones were better even then.

Folks, it’s time to wake up: these guitars are not ‘vintage’: they are just plain old. They don’t represent anything positive in the companies that made them and they are certainly not worth paying large amounts of money for. Even the real-deal guitars aren’t worth what is being asked for them anymore, but that is a whole ‘nother article.

The tones, sounds, and music that many guitar buyers are trying to recapture from the good old days were really more about those who were playing them than the guitars themselves and, while tone-chasing is a noble, though often misguided pursuit, paying a couple grand for a guitar made 20 years or more after the real lightning struck isn’t going to get you there.

The real magic comes from people and their talent, not some un-attainable year of production. Plus, there are tons of great guitars being made today that are far better than their late ‘70’s counterparts. I, personally, would take a new G&L Legacy over any 1978 Strat on the market. There is nothing wrong with collecting guitars and buying what is personally meaningful to you. All I would advise against is over-paying for an as-close-as-I-can-get guitar that never had the magic in the first place.

Randy Rhoads had one of the shortest but brightest runs at the top of the rock and roll game. His body of work with Ozzy Osbourne has stood the test of time and still provides […]

Gibson has taken a bold technological step with the introduction of their Les Paul and SG robot guitars. While they may not be for everybody, these two models get high marks for both innovation and […]