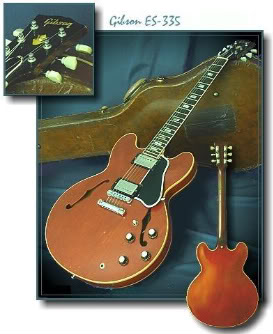 In 1958, Gibson brought the ES-335 into the world in response to Jazz Players whose hollow-bodied git-boxes howled with feedback. Looking very much like a traditional thinline hollow body, the 335 had a center block of maple that cut feedback while it spawned a far-flung family of subtle, genetic variation, such as Gibson’s Vintage ES-345, ES-347, ES-350 and ES-355 models, Epiphone’s Sheraton, Casino and Riviera guitars and a slew of close relatives and out-and-out clones by virtually every guitar maker in existence.

Looks are certainly a big part of the semi-hollow guitar’s appeal. It has all the earmarks of legitimate luthiery: an arched top, a set neck, even an f-hole or two. The big, lower bout feels like a traditional acoustic instrument under the arm of the player. Yet, that center block moves the sound away from warm and plunky jazz tones and right into solid-body territory. Think of it as a sexy little Les Paul in a fat jazz dress, and you’re pretty much on the mark.

The models were rounded up for review share a number of common characteristics. Scale lengths are all 24.75 inches on necks set into maple-ply bodies, headstocks are all symmetrical with three-to-a-side tuners and nut widths are all 1.6875 inches. In addition, all of our review models feature dual humbuckers, dual volume and tone controls and three-way pickup selectors.

Down through history, people have constantly been in search of the next big thing. From the car, to the washing machine, the compact disc to the iPod, many things are thrown at the wall, but […]

Introduced in 1955 Gibson’s Byrdland was one of the first thinline hollowbody electrics. Designed with the help of hot-shot guitarists Billy Byrd and Hank Garland, whose surnames were combined to form the model’s name, the […]

Here’s how fresh the 2011 Epiphone ES-355 is at this point in time and space: I walked into two different music stores, one a giant corporate retailer and the other a small local shop (albeit […]