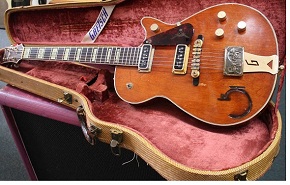 As Billy Gibbons explains in this month’s feature on Eliminator, he played whole lotta axes on that ZZ Top album, including a 1955 Gretsch 6131 Roundup. Once you get a look at this ultra-rare model, you’ll understand why the guitar has appeal for a Texas son like Billy.

Introduced in 1954, the Roundup was designed for country music players (as Its name suggests) and was similar in features and looks to the Chet Atkins 6121.

The Roundup bad a 13 1/4—inch-wide single-cutaway body finished in amber red, orange or mahogany brown and fitted with a top of knotty pine or mahogany (versus maple on the 6121).

Models built from 1954 to 1956 had the full cowboy treatment: western “belt buckle” tailpiece, tortoiseshell pickguard with engraved steer head, a 22 fret fingerboard with celluloid block Inlays featuring cow and cactus engravings, recessed leather binding engraved with campfire scenes, a longhorn steer Inlay on the headstock and the “G” brand on the top.

Electronics consisted of two DeArmond single-coil pickups, each with volume control, plus tone and master volume controls. Other features included gold-plated hardware, a Melita bridge, and a bone or plastic nut.

The rustic features began to disappear in 1957, starting with the “G” brand and belt buckle tailpiece. For 1958, Filter’tron humbuckers replaced the DeArmonds and thumbprint inlays came into use. A zero fret was added in 1959, the 6130’s last production year.

Original Roundups are quite expansive, commanding as much as $10,000 even in rough conditions. In 2006, Gretsch reintroduced the 6130 as the G6130 with contemporary electronics and hardware, at a list price of $3425. Now discontinued, the G6130 can still be found online and in the existing stock of some retailers, allowing you to capture some of the original Roundup’s vibe and sound at a fraction of the vintage-market price.

There is a lot of fuss made in the guitar community about so-called ‘vintage’ guitars, ‘vintage’ being another word for ‘old’. There is a certain part of our world that longs to play a 30-, […]