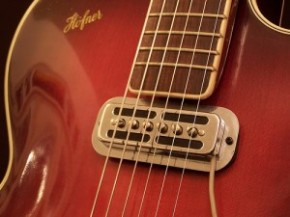 We all love guitars and gear, right? That is why you are reading Gear-Vault and that is why I am writing this article. Those of us who have been doing this for more years than we might care to admit have seen the guitar market rise and fall and many different pieces of gear fall in and out of favor with the musos, collectors, and fetishists out there. Of course, the real vintage stuff, like 50’s and 60’s Strats, Teles, and Les Pauls, have risen to obscene levels of value that have put them into the realm of fantasy for most of us.

I don’t know about you, but dropping 30 grand for a pre-CBS Fender just isn’t going to sit well with my wife, or yours (I know; I already asked them both). But, here’s the thing: at one point, a few decades ago, all those pricey vintage pieces were just old, used guitars and amps that no one wanted. There was a time when you could buy a ’59 Les Paul or blackguard Telecaster for a couple hundred bucks. My question to you, my faithful readers, is what guitars, amps, or pedals are out there that can be readily and affordably had today that have the best chance to appreciating into the higher-priced collectible gear of the future? Already in my life, I have seen the early Fender reissue guitars from the early 80’s rise to $2000-$3000 and the Gibson Korina reissues from the same period climb even higher. We used to buy those reissue Fenders in the mid-90s for $500-$600 consistently. This is what I am talking about. What is going to be hot ten years from now that we can stock up on today?

There are many factors that make an instrument or amp become collectible and maintain or increase its value. Quality, rarity, color, unusual features, artist association, and hype are all traditional considerations that can cause a piece to rise in price. I would like to add a new item to the above list: country of origin. It seems that there is more interest in products that are made in the USA than in years past, as the entire world gets more out-sourced and globalized and we are more and more overrun with cheap imported junk. My personal prediction is that anything that is US-made, especially from the 20th century, has a very good chance to hold its value and possibly increase, as well. For example, sitting next to me as I write this is a first-year 1996 Fender Hot Rod Deluxe amplifier, which was, of course, made in the US. It is a good little gigging amp and is the most popular amp Fender has ever produced and you can buy them in most places for around $400, sometimes less. Already, though, I am seeing people on the music forums talking about how the newer Mexican-made HRD’s stink and break down but that the older American models are worth seeking out.

This is exactly how the vintage instrument craze got started: players realized that the stuff from ten or more years back was better made than the current stuff and they started hunting for it. I predict that in 2020 an all-original US-made 20th century Hot Rod Deluxe could fetch $800-1000, maybe more. There is no way to know for sure, but there are many pieces out there that could grow in stature like this. My question to you is: What are they? Post your predictions as comments on this article so we can compare notes. Perhaps, given the space, Future Vintage may even become a semi-regular Gear-Vault feature. For now, stop and think about what stuff you are currently walking past that could be the sleeper vintage scores of the modern era. Happy hunting. Oh, and read “How to spot Fake Fender Guitars”