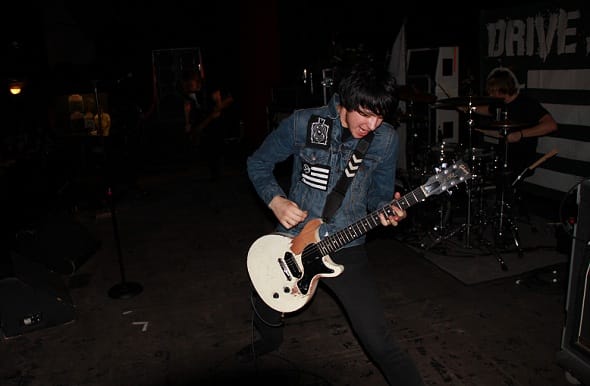 Touring for nearly the past two and a half years, Drive A has done everything right in the attempt to dominate the rock scene. They may have a myspace and reverbnation, but the internet has nothing to do with Drive A’s success. The constant pounding of pavement with bands like Rise Against, Bullet for My Valentine, Four Year Strong, Set Your Goals, and Billy Talent (to name a few) is the basis for the growth of the bands’ ever emergent fan base around the United States and Canada. Gear Vault recently had the opportunity to interview guitarist Jason Nott of the tear-it-down rock band Drive A to gain a little more insight into what the road is like, what gear he plays, and where his inspiration comes from. Today we talk to Jason Nott from Tempe, Arizona where Drive A is the support for headliners Escape the Fate on the first leg of their tour.

GV: How’s the tour so far?
JN: It’s great, it just started yesterday actually. We’re noticing more Drive A fans out to the shows, which is good.

GV: How long have you been playing guitar?
JN: Seven years…I got my first guitar when I was 10. I didn’t get serious about guitar until I was about 13, and I’m 20 now.

GV: What inspired you to pick up the guitar?
JN: I’ve always loved music ever since I can remember. Seeing music videos from Green Day and Blink 182..to me it looked like they were having the best time, and I wanted to do that too! (laughs) I won’t say that’s my main influence, but that’s really what inspired me to pick up an instrument.

GV: Do you play any other instruments?
JN: I play drums a little bit. Being in a band over the years, you eventually branch out and try to play everything else other than what you’re supposed to play. (laughs) I have a kit at my house I mess around on.

GV: Who are your biggest influences when it comes to musicians?
JN: I think The Clash are one of my favorite bands of all time. They’re amazing, and did so much in their time. They weren’t just a band, but a movement. They had something to say, and I loved that about them. Mick Jones is such a great guitarist.

GV: What’s life like on the road? Is it easy for you? Do you get tired?
JN: There always comes a point toward the end of a tour where you just get totally exhausted and excited to go home, but this is my life. Touring, playing music, and being in a band is my life and I wouldn’t change it at all. But of course there comes a time when things are happening at home and you can’t really help what’s going on there. You think if you could be there (at home) then maybe things would be different…but for the most part, I wouldn’t change it ever.

GV: How many tours have you been on with Drive A?
JN: Probably about 10 or 11 full U.S. tours. Sometimes even a few dates in Canada.

GV: How’s Canada?
JN: It was cool…I like Canada a lot because the kids are a bit more mature for their age cause the drinking age Is lower. It’s more of a laid back community there since everyone’s old enough to go out to the bar and have a good time. Especially Montreal, we’ve built a good following there.

GV:What’s your favorite city to play in?
JN: I’d say New York City. Everytime we play in New York is just unbelievable. The last time we played there was with Bullet For My Valentine, and the show was nuts. You would’ve thought we were the headliners. It was one of those kind of shows where everyone in the crowd was into it. It was insane! 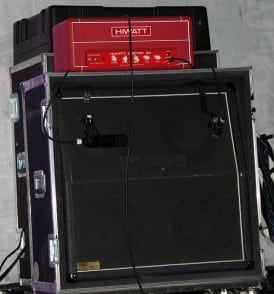 GV: So we’re all gear nuts here…what kind of amplifier(s) do you use?
JN: Right now I’m using a red 20 watt Hiwatt head. I used to use a Kerry King Marshall JCM signature…that was like five years ago when I was much worse guitar player and needed more gain. We used some Fender Deluxe amps on the last record as well.

GV: What guitar(s) do you play currently?
JN: I use a Gibson Nashville Les Paul Junior that I got like four years ago. It was all white, but now it’s all beat to shit. The paint’s chipped off because I play it so hard. I believe it was a run of 400 that they made like three years ago. I was so lucky to get it! When I heard about it I got on the website right away and bought for $700. I think I heard that they doubled in price since then.

GV: Do you use any effects at all?
JN: I used to use a Boss Delay, but now I only use a Boss Tuner Pedal. It’s just straight up distorted rock and roll now.

GV: What brands/companies would you like to try?
JN: I’d really like to try Gretsch. I actually did try a black Duo Jet, and it felt really great. I’ve also heard that the Bogner heads are really rad too.

GV: Who do you think is the best guitarist of all time?
JN: You know, you’ve got your shredders out there, and that’s cool and all. I really like more experimental stuff though, and I think Jack White is really great because of what he’s done for this generation. I love the different guitar tones he’ll use on each song. Just very unique.

GV:What up and coming bands do you think are good?
JN: I’d say The Bronx and the Ghost of a Thousand.

GV:What kind of older music are you into?
JN: I love The Beatles. I was always way into the 70’s punk stuff…the whole British invasion.

GV: That’s all the questions I’ve got…thanks so much for your time!
JN: Thank you very much, I appreciate it!

You can check out Drive A on tour now with Escape the Fate, or online at www.mypace.com/drivea. There you’ll find some tunes and a full list of tour dates.