An interesting debate was brought before our attention and we thought we’d pass it along to you guys. Let’s put your mad guitar knowledge to the test! Please feel free to comment at the end of this kick ass discussion!

Can you tell which is Epiphone vs Gibson?

Let’s take a closer look at these two guitars: 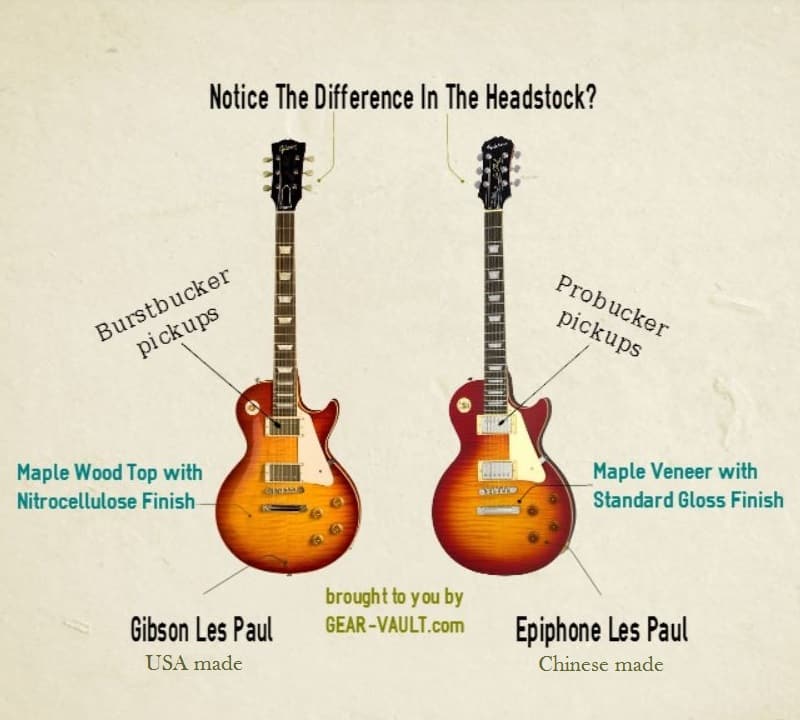 At first glance, these two guitars appear quite similar. In fact, many players might even have trouble distinguishing between the two. While each Les Paul look nearly identical, the major difference you will notice, aside from the logos being different, is the differences in the winged-shaped headstock. Epiphone has more of droop headstock with a rounded curve in the middle, whereas Gibson has less of a curve and more sharp up the sides; Giving each headstock a distinctive winged-shape style.

Gibson can costs as much as NINE TIMES more than the Epiphone Les Paul. That’s right. The axe on the left is perhaps one of the most recognizable guitars in the world: Gibson Les Paul Standard. You can typically purchase one of these for around $2500-3500. Pictured just to the right of the Gibson is the Epiphone Les Paul Standard, which usually clocks in at just under $400 (or $499 for the Plustop Standard Pro).

Now, we realize that Epiphone is Gibson’s junior brand (not to be mistaken with the Les Paul Junior), and their target audience is usually newer players who may not be ready to spend a few grand on a guitar just yet. However, we still have a tough time believing that Gibson’s make on the LP is actually nine times better than Epiphone’s. In order to settle this issue once and for all, we’ve done some investigating to really determine what the difference between these two really are, and whether or not that difference is worth the extra three thousand dollars. In order to do this as fairly as possible, we’ve made an attempt to avoid subjective statements (i.e. “but the Gibson just feels better”), and instead will be taking a look at the hardware of these two guitars. So without for ado, let’s dive into the varied world of the Les Paul. There’s a few points of discussion that will hit along the way, including:

Guitar Aesthetics – The Actual Design of the Guitar

Let’s begin this investigation by inviting you, the reader, to examine the infographic image above. But this time, pay attention to the aesthetics of the guitar. As you can see, most of the stylistic touches between these guitars are nearly identical. Both feature the classic four knob control system with 22 jumbo frets marked by the classic Les Paul trapezoidal inlay. In addition, both guitars finish with the similar headstocks and sport matching pickguards. In fact, if we choose just to examine the visual similarities between these two guitars, you’ll find them to be quite similar. Although seemingly similar, these are not the same guitar. The most striking differences between these two guitars are:

Tonewoods – What The Guitar Is Really Made Of

Both guitars feature thin, 60’s style mahogany necks with rosewood fretboards. This same mahogany is also used as the underbody for each of the guitars. The top material of Gibson’s Les Paul is constructed of maple wood with a nitrocellulose finish, while the Epiphone uses a maple veneer with a standard gloss finish. This actually serves to make a huge difference in the tone of the guitar. FYI, random but relevant fact: veneer is created by gluing a multitude of thin sheets of wood together. While this creates a product that is less likely to crack, it in many ways seems to slightly alter the dynamics and removes a bit of the lower mid warmth. Since the maple top and the tone associated with it is one of the most ICONIC parts of the classic Gibson Les Paul, this point of contention seems to indicate at least one area where Gibson’s Les Paul is demonstrably better than its Epiphone cousin. However, wood is only as good as its protection, and as you may know, these two guitars have entirely different finishes…

Finishes – How the Guitar is Protected

We briefly touched on this in the previous paragraph, but a huge difference between these two axes is the choice of finishes. As stated, Gibson’s Les Paul uses a nitrocellulose finish which must be painstakingly applied via spray to the guitar (the fumes are actually poisonous to breathe). Despite the hassle, when applied properly, nitrocellulose finishes are very thin, allowing them to create a minimal impact on the vibrations of your guitar body while playing. The Epiphone’s standard gloss is roughly analogous to what you might find in your local hardware store. It’s easy to apply and protects your instrument well, but must be applied more thickly, reducing the guitar’s ability to vibrate. This can lead to some changes in tone, though these changes won’t be nearly as noticeable as the differing pickups…

Pickups – When Electronics Come Into Play

Although a bit difficult to see in the picture above, these two guitars differ in their choice of stock pickups. The Gibson LP features their standard BURSTBUCKER pickups; Epiphone instead created the PROBUCKER pickups as a tribute to the BURSTBUCKER. In fact, in many ways the PROBUCKER seems to be a lower end version of the BURSTBUCKER (which is actually just a lower end version of Gibson’s PAF pickups). Both of these humbuckers feature roughly the same materials and wiring. However, the PROBUCKER has a different connection type, with four simple input connections. This makes it easy for inexperienced players to work on their pickups, but does unfortunately reduce the quality of the pickup ever so slightly. It should be noted that the PROBUCKER pickups only come on the Epiphone Les Paul Standard Pro. The lower end Epiphone LP’s do not feature as nice pickups. In all, the pickups seem to be another point for Gibson.

A final area of difference between these two guitars is the addition of new controls to the Gibson LP. Whereas the Epiphone LP only features the standard tone, volume, and pickup selector controls, Gibson’s take adds in phase control and true bypass capabilities. This allows for professional quality recording that will be in phase and contains minimal noise and static. Yet again, another point for Gibson. It almost seems to highlight the fact that Gibson wants their instrument to be viewed as professional quality, as opposed to the entry level Epiphone. Actually, Gibson’s line of thinking might be on to something…business branding.

Business Branding – “Only a Gibson is Good Enough”

In all, it’s pretty undeniable that the Gibson seems to have all around better hardware, which really shouldn’t come as a surprise. However, even after this investigation, we still don’t believe the differences between these two is around $2400 simply due to hardware. In fact, the powerful branding techniques, built on the legacy that IS GIBSON, are behind this pricing conundrum. After all, each of these guitar manufacturers both need and want to make large stacks of cash. While the Gibson LP is undoubtedly the better guitar in terms of construction, chances are that much of the price difference is related to branding. Think about it… Gibson knows that the Les Paul is definitely its most popular model on the market. In fact, it’s one of the most popular models of any brand! Due to the laws of supply and demand, as Les Paul became more popular, the prices of their higher and lower end models have polarized. Their more expensive, professional level guitars have only increased in price, while their bottom end Les Paul (the Epiphones) have become more accessible at a significantly lower price. This stratification has created enough space in the market for two players, Gibson and Epiphone. So long as one remains a high end product while the other is lower end, the two facets of this company won’t cannibalize each other’s sales, leading to maximum profits for both. You can be sure that when Gibson began pricing their Les Paul, they chose a price that would maintain this chasm as much as possible, while still remaining accessible for some consumers ($3k isn’t a lot to invest when playing guitar is your job). Gibson’s branding might explain the difference in price between these two guitars; a difference so great that can’t be justified by better hardware alone. 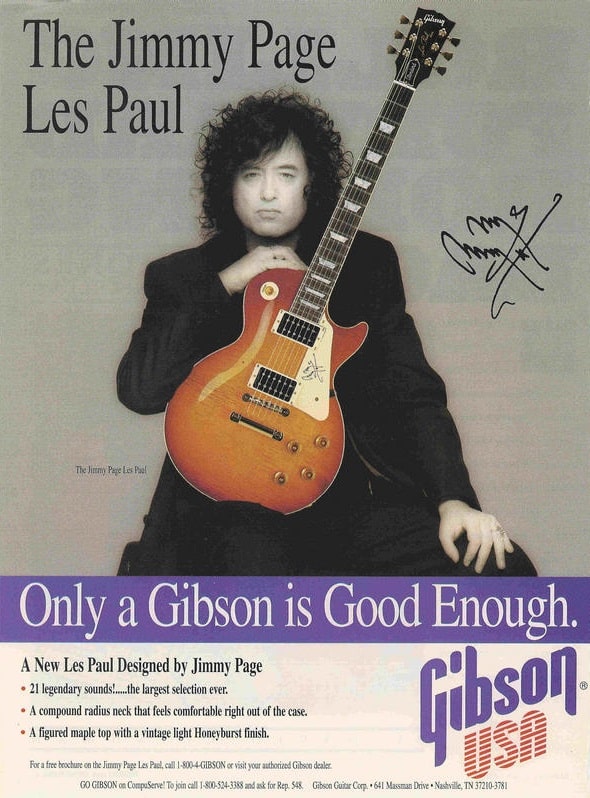 In reality, the difference in price between these two is probably a combination of the following: branding, consumer perception, the actual physical hardware and construction of the guitars. We hate to say this, but for the sake of journalistic integrity, we must: We don’t think the price difference between these two guitars is fair. Sure, we might understand the reasoning behind this difference, but that still doesn’t convince us that Gibson’s LP is actually worth all $2400 of those extra dollars.

Tone is one of those things that guitarists look for, long for and obsess over. Non-guitarists often don’t understand our mania for it and our ability to split endless hairs in pursuit of it. We all have our tonal benchmarks that set our ears ablaze and gave us something to aim for in our lives, and it is always interesting to find out what tones inspire what people out there in Gear-Vault-land […]

Carvin is thrilled to introduce their latest model, the ST300. This new model offers the features and choices of Carvin’s contemporary Custom Shop guitars with the timeless body shape that they offered back in the […]

Paul Reed Smith and Paul Jackson, Jr. have teamed up to design the JA-15, Jackson’s first signature model PRS guitar. Whether it’s playing on American Idol, his latest gig on Jay Leno’s “Tonight Show,” recording with legendary musicians like Michael Jackson, Elton John, and Ella Fitzgerald, or composing and recording his own music, Jackson’s multiple decades as a highly accomplished and versatile musician have factored into this model’s development. Gear-Vault Guitar News […]