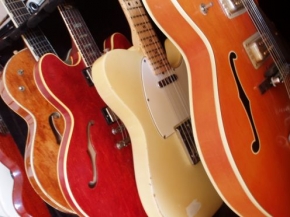 Guitarists, as most of us already know, are perhaps the most intense and obsessive of all musicians about their instrument and their relationship to it. This obsession normally manifests itself in one of two ways that have been identified and can be determined by the behaviors displayed by each player in turn.

The two types are Players and Collectors. While they can be completely distinct, there is often some crossover between the two, which makes living with said player especially difficult for their spouse. So that you, our beloved readers can get some idea of what these individuals look like, we here at Gear-Vault have done extensive amounts of field research to bring you examples of these types of folks in action. See if you can spot your band mates (or yourself).

– Players are all about function rather than form. These are normally regularly gigging musicians who are only interested in buying stuff that helps them do their gigs. They normally don’t give a hoot about pedigree, country of origin, originality, or any of those kinds of panic button issues. In fact, they are often the first to modify or redesign some or all of their rig if they feel it would give them a sound or capability they feel is needed.

Nothing is sacred to these guitarists, as they don’t have time for fussiness or anything that doesn’t move their music forward. They often have many guitars and amps, but they are usually customized somehow, made to suit their individual preferences. If every amp and pedal you own is modded and rodded to within an inch of its life and your main guitar has six pickups and a MIDI interface on it, you are probably a Player.

– Collectors are polar opposites of Players. To the Collector, EVERYTHING is sacred, untouchable, and holy. The ultimate goal of a Collector is to have a roomful of old guitars that have never been played, tuned, used, or sweated on since they left the factory. Nothing can be changed, ever, because then originality is lost and originality equals money.

Plus, it just breaks their little Collector hearts to see something non-stock on anything. These types usually have a theme to their guitars, as well, and that makes them easier to spot. Someone with 200 miscellaneous guitars is probably a Player (or just a wacko).

Someone with 200 Les Paul guitars is most definitely a Collector. Very often, Collectors gig a lot less than Players, though not always. When they do gig, however, they are normally seen playing some kind of relatively inexpensive, expendable guitar, as taking their good stuff out is just too risky. You know the sweat and all of that. If your dream in life a custom color pre-CBS Fender that you would never allow yourself to touch, you are most likely a Collector.

What is important to keep in mind about both Players and Collectors is that they are both showing much love to this instrument of ours, just in different ways. Some folks want it all to be loud-and-proud onstage for all to see and hear, and others want to preserve the original essence of things so that whatever it is about those things that set us all off in the first place is not forgotten.

The important thing to remember is that both these types are helping to keep guitars and guitar-based music alive and thriving for all the generations to come. They are just different expressions of the same passion that we all feel for making music and being around guitars, which is really the coolest thing in the world. Neither Player nor Collector can argue with that.

AlumiSonic’s all new 1100-Custom Aluminum Guitar is the creation of several years of research and development into the ultimate combination of material types and thicknesses, to produce the perfect equalization of aluminum clarity with profound, […]

While Gibson is known primarily for making fine guitars, their amplifiers predate any Fender or Marshall amp by at least a decade. The company’s excellent tube amp offerings dried up in the Sixties, but with […]