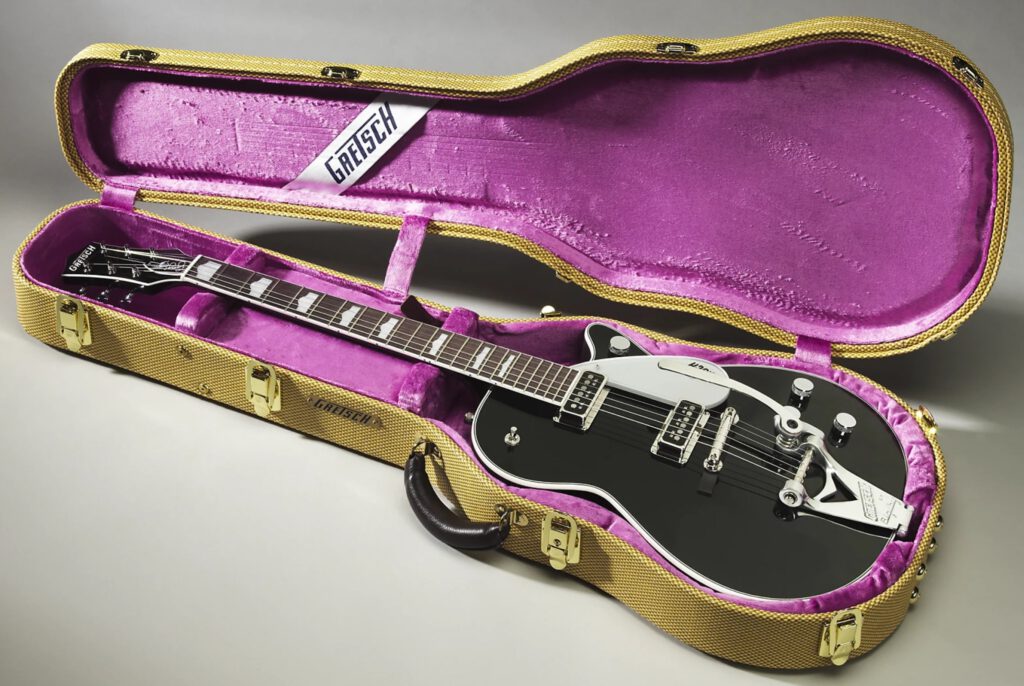 Fans of George Harrison may well remember the guitar he was holding on the cover of his Cloud Nine record: a black ’57 Gretsch Duo Jet. When the Gretsch Company decided to honor the legendary guitarist with a signature guitar, it was this Gretsch Duo Jet they chose to re-create.

Older fans might recall George Harrison was in a band previous to The Traveling Wilburys, called The Beatles. Before the Fab Four became household names, a 17-year-old Harrison purchased what he would later call his “first real decent guitar,” the aforementioned Duo Jet. He bought it from a Liverpool cab driver, who had, in turn, bought the Gretsch new for $210 at a small guitar shop on West 48th St. in New York City. The cabbie then bought a Bigsby tremolo at Manny’s Music and had it installed, requiring the lower strap button to be relocated above its original center position.

Gretsch originally re-created this instrument down to the finish wear for a “Tribute” model produced at its U.S. Custom Shop. That guitar sported a price tag of $20,000, and only 60 were made for the entire world. Realizing that Harrison lovers number in the thousands rather than the tens, the company wisely offers the “Professional Collection” Signature model, produced in Japan. The Gretsch guitar reviewed here is the latter model with a more modest price point and no production limits.

The Tribute’s lacquer finish has been replaced with a urethane one on the Signature, and you will have to add your own road wear; still, the George Harrison Signature guitar reproduces many of the same details as the more expensive model. These include a Bigsby tailpiece with an unusual black “Phillips-head” vibrato arm pivot bolt and the offset mounted strap button.

Painted the same gorgeous black as George’s, this Gretsch Duo Jet sports three-ply body binding (white-black-white) on a mid-’50s-style chambered body, featuring a maple top and mahogany back and sides. The one-piece mahogany neck is bound in single-ply white, as is the Grover tuner-equipped headstock. A 22-fret rosewood fingerboard is radiused at 12″ for easy string bending—despite smallish standard-sized frets. The truss rod’s cover features an engraved version of George Harrison’s signature. 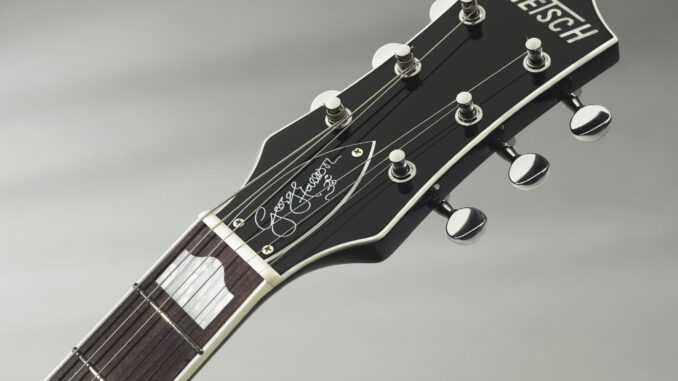 The George Harrison Signature Duo Jet guitar impressed me from the moment I unboxed it. A beautiful premium tweed case cosseted the guitar in pink velvet—very ’50s.

I have long coveted a Duo Jet, loving the compact, light body and ease of playing, and this version did not disappoint. Strapping it on, I found the relocated strap button did nothing detrimental to the balance; whether or not it was helped by the weight of the Bigsby, the body easily countered the weight of the neck.

The shape and width of the neck fell comfortably to hand, and the low, buzz-less action and small frets made sliding into rockabilly licks a breeze. The guitar resonated beautifully acoustically; still, I raised the action a tad to suit my taste and to bring out even more ring.

The body angle allows the use of a Bigsby with no string bar, making the wobble action smoother and maintaining excellent tuning when rocking clean country licks. A carry-over from the original is the vintage-style “rocking bar” bridge with a rosewood base. Despite having no adjustable saddles, the intonation was quite good. If you want to use the guitar for studio work (and you will), I suggest replacing it with a Tune-O-Matic-style bridge for even better intonation, while saving the original in the case.

“This Guitar (Can’t Keep From Crying)”

Plugging into a Fender Blues Junior and an Orange Tiny Terror revealed two distinct sides of this many-faceted instrument. Through the Fender, the DynaSonic single-coil pickups offered gobs of country twang from the bridge pickup and warm bluesy weep from the neck pickup. The chambered body added lots of beefy low end to clean and dirty sound alike. Adding some heavy tube-style distortion, I was in Neil Young heaven, grinding out huge, chunky chords and wiggling the Bigsby like a madman for Crazy Horse-inspired screaming solos.

Through the Orange, the Gretsch Duo Jet recalled the British pop tunes of the Fabs in all their glory. Clean two-pickup tones instantly conjured “I Feel Fine.” Adding either Germanium boost or fuzz to bridge and neck pickup settings called up the full gamut of Abbey Road lines and solos.

The Duo Jet’s simple switching and controls offer everything I need in a two-pickup instrument. A three-way switch let me choose bridge, neck, or both pickups, and a master tone controlled their brightness. When using the pickups together, the unique Gretsch master volume let me turn down both at once, without altering the delicate balance between the two pickups I had carefully set up with the individual volumes.

The George Harrison Signature Duo Jet guitar appears to give little away to the Custom Shop model, in terms of playability and tonal possibilities. A few lucky collectors will get the Tribute Duo Jet, but any collector or player who really wants one can have a Signature model. I think George would have been proud to play one—I know I would. Source: Musician’s Friend

When you consider that Ibanez has produced more than a thousand guitar models, it’s no surprise that the company delivers high-quality instruments at an affordable price. The sound, look, and performance of Ibanez’s Arondite and […]

Jackson Dinky vs. Ibanez RG – Which Guitar Is Best?

The Jackson Dinky and Ibanez RG are long-time favorites in the rock and metal guitar community. Both represent excellent choices for rock players looking for a new axe with a history of getting the job […]