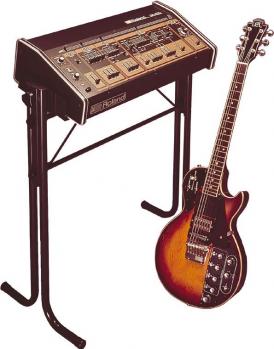 The introduction of the Moog Guitar at this past summer brought attention of previous attempts to making guitars more vintage synth-like. The Moog Guitar Company didn’t create a guitar synth, per se, but with its features like the voltage-controlled filter and continuous sustain, it’s a prodigy of the Roland GR-500.

The Roland GR-500 was introduced in 1977, which was actually a guitar synth system, with a comparison of an Ibanez-made Les Paul-style electric guitar/controller and a synthesizer design with more than 40 switches, knobs, and controls. The Roland used a separate floor unit device, the PC50 footswitch. This unit allowed users to create and select from three different preset sounds. In that era, before MIDI, the GR-500’s components joined together with a bulky 24-pin cable about the diameter of a “garden hose”.

The instrument itself was an impressive looking guitar, with a beautiful honeyburst finish and an extensive knob-encumbered control panel on the top (like Les Paul) and bottom right (like Ibanez) that gave full control over the synth unit’s four sections: Guitar, Poly-Ensemble, Bass and solo-synth section called “Melody”. The guitar had a single humbucker pickup for standard guitar sounds and a hexaphonic pickup that allowed the synth-guitar to track the pitch of each string note with a fair degree of accuracy. In addition, magnets installed within the body allowed the guitar to produce everlasting sustain on demand, though all this added significantly to the instrument’s weight.

So what did the Roland GR-500 sound like? It’s reported that the Poly-Ensemble could produce convincing bowed string sounds, bass tones were effortless, and the synth’s “Melody” section gave guitarists total control over the synth’s components, allowing a complete range of tones, noises and, of course, effects.

Roland’s GR-500 is not only unique, but rare, especially complete systems (see: PC50 footswitch and 24-pin cable), which is unfortunate. Without a synth unit and the cable to connect it, the GR-500 guitar is just a guitar.

Gibson Guitars — “Lucille” has been a legend ever since the King of the Blues christened his guitar with the name after saving it from a dance hall fire in Twist, Arkansas, in 1949. Also […]

Picking the right guitar for Death Metal is much more involved than sinister-guitar-styles and deadly-pointy-shapes in dull-dark-colors. We need to help you find the best instrument within your budget along with one that compliments your […]