If you want a guitar that has a good sound and won’t leave you begging on the street for spare change, the Epiphone Les Paul is a popular choice. But one of the ongoing questions is whether there’s difference between those Made In China and the guitars Made In Korea and which you should be looking at buying.

[If you already have an Epiphone Les Paul and want to figure out what LP you have, scroll down to the bottom of this page and we’ll help you figure it out]

When you’re first starting out as a guitarist, what kind of guitar you have isn’t particularly important. If you know exactly one chord and can only hit it half the time, a quality guitar isn’t going to make a damn bit of difference. You’re still going to sound like crap.

There will come a point, though, when you need a better guitar, because your sound will suffer. Plus, this is going to be the time when you want to get something that looks cool because, frankly, half the fun of playing is looking awesome when you do it.

Of course, if you’re like most guitarists, you don’t have a ton of money to spend on your guitar, either. You need that money for beer and women (or men). So what you’re looking for is something that sounds good, looks good, and won’t break the bank, which brings us to the Epiphone Les Paul.

If you think of an electric guitar, the picture you have in your head is probably a Gibson Les Paul. Guitar legend, Les Paul first designed the electric guitar that bears his name back in the fifties, and is still one of the most iconic guitar styles today.

They are also some of the most expensive guitars on the market. Gibson models can easily run into the thousands of dollars, putting them well outside the budget of a lot of people. Fortunately, they aren’t the only option in town.

Epiphone makes its own version of the classic Les Paul, but they cost a whole lot less (under $600 for a Classic or a Standard). This is largely because they are manufactured overseas — in China, Korea and Indonesia. 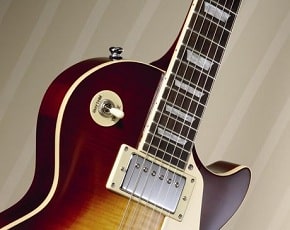 Epiphone Les Paul guitars are mostly indistinguishable from the Gibson version, from their look and feel to their sounds. Not everyone would be able to tell the difference at a glance–you’ll notice the difference from the headstock design. It’s tempting to label them a knock off, but the company is actually owned by Gibson.

Read: the differences between Gibson vs Epiphone Les Paul to learn more.

The main thing you’ll hear discussed in music circles is whether there is a difference between the Chinese and Korean made guitars, and if the difference is big enough to affect your buying decision.

This is one of those things where it’s hard to get a handle on the answer. Part of this, naturally, is because some of it can be subjective. You might try a Made In China (MIC) and a Made In Korea (MIK) and not be able to tell any difference, while another person might hear and feel significant differences between them.

— Personally I like Korean Made Les Paul better than Chinese.

But what that means is that you’re likely going to get a lot of different opinions on which is better. If you have the chance, your best option is to get a hold of each one and decide for yourself.

For Example, here is a post on MyLesPaul.com Forum:

During that time period Epiphones being made in Korea were still considered better than anything out of Qingdao until after 2006. In 2007 the Qingdao China Epiphone factory started implementing noticeable upgrades in building and materials to help make their Epiphone guitars some of the best ever made in the world.
But, in 2004 Korea still ruled.
I’ve seen many shoddy Qingdao pre-2006 Les Pauls and SG’s with messy binding and gobs of glue on the neckjoins
but somehow after that time they seemed to really pull it together to make a better instrument.
Pre 2006 Epiphones from Korea would be considered superior, but by 2007 there would be little difference.

Depending on who you believe, the sound difference is largely down to the wood. The two factories have different suppliers, and wood does make some difference in sound; unique wood is believed to be the reason Stradivarius violins sound so much better than Guarneri.

Generally speaking, for people who claim there is a difference between the two manufactures, the consensus is that the Made in Korea Epiphone guitars have a slightly deeper, richer sound. The difference is generally said to be fairly slight, and not as important as the differences between individual guitars.

The other issue is quality. There is some concern that the Chinese made guitars simply aren’t as well made as the Korean guitars. This is generally believed to be the result of the difference in working conditions in the two countries. Chinese made were known to be a bit more sloppy, but that could have changed since this article.

Without getting into a treatise on international labor relations, here’s what you need to consider. China has a much lower standard of living, and the workers in their factories are paid much less than you would get elsewhere, and are, allegedly, expected to work grinding hours. The general theory is the poor working conditions can lead to compromised guitars.

Korean guitars are manufactured in South Korea, which has one of the highest standards of living in Asia, and the factory workers that produce the Korean made Epis are well paid and well trained which, if you believe the rumors, means the Made In Korea Epiphone guitars are much better constructed.

There is also an Indonesian factory which opened more recently, but there doesn’t seem to be much being said about the quality and sound of those guitars. No doubt the serious gearheads will have an opinion soon enough.

So which is better; the Made in Korea Epiphone or the Made in China Epiphone? The unhelpful truth is that there isn’t a simple answer to that. If you are in the market for an LP, but can’t actually try either out before you buy it, I’d probably steer you towards the Korean made.

Your best option is always to try the guitar out yourself. Go to your local guitar store and play with a couple of different models. No one can say what guitar is going to look and feel best for you, so you need to be the one to make the decision. If you do that, you’ll get the right guitar no matter where it comes from.

What Epiphone Les Paul Do you have?

Serial numbers
You might find the serial numbers stamped on the back of your headstock. It can consist of a series of numbers or letter(s) and numbers.

Only numbers
For an eleven digit serial number, the encoding is as follows:
Example: 11051502060
The first two digits are the last 2 digits of the year. (11)
The next two digits represent the month. (05)
The 5th and 6th digit represent the factory code.. (15)
(See list numbered factory codes)
The last 5 digits form the series sequence number.
Serial number 11051502060 is the 2060th guitar built in May 2011 at the Qingdao factory in China.
(Since 2004 Epiphone guitars have been produced in China)

Five digit serial numbers
Five digits with a space after the first digit and custom shop on the back of the headstock, applied from 1990 to 1999.

The first digit is the last digit of the production year, the following four digits are the serial number.

Five digits no space after the first digit were used from 1951 to 1956 for both acoustic and electric models.

Seven digit serial numbers do not have a factory code, here is the first digit the last year of the decade. The 2nd and 3rd numbers represent the month.
These were manufactured in Korea by Samick between 1984 and 1995.

Eight and nine digit serial numbers without a factory code.
These were used respectively from 1990 and 1988 and also manufactured by Samick in Korea.

Letter(s) and numbers
One letter five digits
The letter indicates the factory code and the first digit is the last digit of the year (since 2002).

The factory code can be an F or a T here.
(See list Factory code letter below)
Example: Serial number T32222 is the 2222th guitar of 2003 built in the factory of Terada Gakki Seisakusyo, Japan.

One letter six digits
The letter indicates the factory code and the first and second digit are the last two digits of the year.

Two letters five digits
The letters indicate the factory code and the first digit is the last digit of the year.
Example: Serial number CI21234 is the 1234th guitar built in 2002 at the Cort, Indonesia factory.

One letter seven digits
The letter indicates the factory code and the first digit is the last digit of the year.

The 3rd and 4th digits represent the month.

Two letters six digits
The letter indicates the factory code and the next two digits are the last two digits of the year.

The second letter (third character) stands for the month. (A = January, B = February, etc.)

The last 4 digits form the series sequence number.
Example: Serial number R04E0123 is the 123st guitar of May 2004, built in the Peerless factory, Korea.

One letter eight digits
The letter indicates the factory code, the next two digits are the last two digits of the year.

The 3rd and 4th digits represent the month.

Two letters seven digits
The letter indicates the factory code, the next two digits are the last two digits of the year.

The second letter (third character) stands for the month. (A = January, B = February, etc.)

Two letters eight digits
The 2 letters indicate the factory code, the next two digits are the last two digits of the year.

The 5th and 6th figures represent the month.
The last 4 digits form the series sequence number.
Example: SI02060234 is the 234th guitar of June 2002, built at the Samick factory in Cileungsi near Bogor, Indonesia.

Made In Korea Epiphone Les Paul