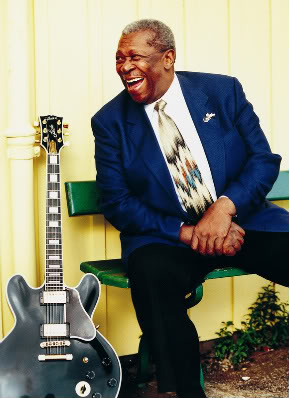 There are moments in every B.B. King solo when the man hits a certain combination of notes, or bends the string in a way so uniquely his own, it’s almost as if he just leaned over and whispered his life’s secrets in your ear. B.B. King is that rare animal—a distinctive blues stylist. So unique is his talent that he’s taken possession of an entire position on the guitar neck, on that might as well be known as “the B spot.”

Every house has its architects, however, and one of the chief designers of King’s place was alto saxophonist Louis Jordan. In the Forties, Jordan was every bit as popular with blues audiences as King is today. Coming up in Chick Webb’s big band in the Thirties, Jordan made a name for himself with his inventive, light-fingered sax work.

After taking over his own band he became known for his witty lyrics, rambunctious stage act and engaging vocal delivery on jump classics such as “Saturday Night Fish Fry” and “Choo Choo Ch’Boogie.” Jordan’s combination of wild energy, entertainment and musicianship set the stage for the coming evolution of swing into rhythm and blues and rock and roll. And he could hit that crying, bent not that made your neck hair stand up, a note that spoke to a young Riley B. King and still speaks through King over a half-century later.

King’s release of, Let the Good Times Roll: The Music of Louis Jordan, closes the circle on a half-century musical relationship as he takes a generous, 18-song tour through the Jordan songbook. For decades, King has made Jordan tunes like “Caledonia” and “Let the Good Times Roll” a staple of his live act, and he has spoken at length about Jordan’s influence on his playing, even naming specific licks he “borrowed.”

On his record, backed by a solid, swinging band, including such longtime collaborators as alto saxophonist Hank Crawford, tenor saxophonist David “Fathead” Newman, drummer Earl Palmer and Pianist Dr. John, King pays Louis back with interest, even as he reminds us of our own debt.

The music works best when King least literal in his tribute. Much of the still-vibrant quality of Jordan’s recordings lies in the innocently sly charm of his rapid-fire delivery, and King gets a little breathless at times when going word for word with the original.

He does a creditable job on “Beware, Brother, Beware,” reminding us that rap was alive and well, 40 years before Snoop Dogg. But King succeeds on a deeper level when he takes the music in his own direction. A case in point: the slow, bluesy “Somebody Done Changed the Lock on My Door,” to which he adds some caressing guitar lines that bow wetly in Jordan’s direction.

After nearly 50 years as one of the most copied guitarists on the planet, King can still surprise you mid phrase with something new. And even as his vocals show the wear of playing 250-plus dates per year since 1953, his guitar work sparkles like a freshly uncovered gem.

The rest of the collection can be similarly divided between imitative covers and inspired tributes. There are faithful renderings of “Saturday Night Fish Fry” and “Caledonia” that, while cleanly performed, tend simply to whet one’s appetite for the original. Then there are the generally slow songs—in particular, “I’m Gonna Move to the Ourskirts of Town” and “Rusty Dusty Blues”—on which King lays back and reflects on his old friend and mentor in a more personal way. On those tracks, you can sense the conversation taking place between Jordan and King, the songster and the singer, the inspiration and the inspired. As the song says, “It’s a Great, Great Pleasure,” and indeed it is.