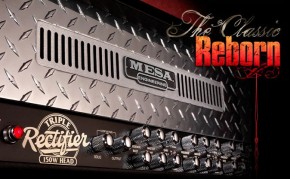 There are many amp companies that loom large in the world of hard rock and heavy metal. One of the most important, especially to the more modern kinds of rock is Mesa Boogie. Mesa has a long history of making gain-filled amps, but, to many modern rockers, there is nothing like one of the Mesa Boogie Rectifier series. That is why we here at Gear-Vault have made the Rectifiers, or “Rectos”, number three on our list of the Top 5 Metal Amps.

Rectos hit big in the 90’s and established themselves as sound du jour of that time period, offering more gain and more tonal choices than other amps available at that moment. There are Single, Dual, and Triple Rectifiers out there and each has its fans.

The most popular, however, is the Dual Rectifier, which gives users the options of a solid state or tube rectifier for tighter or looser sounds at the flip of a switch and drains 70-100 watts of power out of a quartet of 6L6 tubes, depending on the options selected. The Dual also has a bias switch that lets players use EL34 or 6L6 tubes for even more tone control.

If the Dual Recto sounds like too small of an amp for your bone-crushing metal stylings, then step on up to the Triple Rectifier, which is truly the elephant gun of the Mesa line. It produces 150 watts from 6 6L6 tubes and was advertised with the catch-phrase “When Excess Is Barely Enough.”

This giant of rock and roll became a common site on the biggest stages of the world and was used by bands like Metallica, Rammstein, and Korn. The Rectifier series really changed the way heavy music sounds since the amps hit the streets and those looking for that particular sound have found that nothing else really gives it up like a Mesa.

REVIEW — Mesa Boogie MARK V is really a collection of amplifiers. There are far too many circuits and sounds to think of it as merely an amp. It is also a living legend of […]

The Engl Fireball head is an amp aimed squarely at rock and metal guitar players. It delivers 60 watts of 6L6 tube power at 8 or 16 ohm and offers users a vast reserve of […]