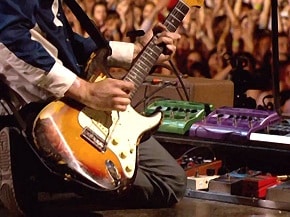 Fender Stratocaster is, along with the Fender Telecaster and the Gibson Les Paul, one of the most iconic electric guitars ever made and has been the ride of choice of literally generations of guitar players ranging from rank beginner to seasoned pro. It’s seductive contours and curves have come to define what an electric guitar looks like and feels like for untold numbers of our guitar-slinging brothers and sisters out there, and there will be someone playing one somewhere for as long as there is any kind of interest in electric guitar playing. The Strat made its debut in 1954 and has been in constant production since then with no end in sight. Contemporary music would sound a lot different if the Strat had never been invented, as it was the guitar of choice for legendary guitarists like Buddy Holly, Jimi Hendrix, Stevie Ray Vaughan, Eric Clapton, Dick Dale, Robert Cray, Yngwie Malmsteen, Ritchie Blackmore, and many others. It has stood the test of time and become one of the guitar designs and sounds we have come to depend on.

The Stratocaster was designed by Leo Fender, George Fullerton, and Freddie Tavares for the Fender Electric Instrument Manufacturing Company, which was founded by Leo Fender in Fullerton, CA in 1946. By that point, Fender had already seen some success with his first big guitar design, the Telecaster, which came out in 1952 and he also gave the world the first fretted electric bass guitar, the Precision Bass, the year before. Fender was not the first person to manufacture electric guitars, but he was the most successful in the marketplace and also streamlined the manufacturing process so that the guitars were simple to make and simple to service in the field and many see him as the Henry Ford of the guitar business.

The first Strats were offered to the public sporting a two-tone sunburst finish lovingly applied to the now-familiar deeply contoured solid ash body, a one-piece maple neck with 21 frets and Kluson tuners, three single coil pickups, the newly-created Strat vibrato system, a master volume, two tone controls, and a three-way pickup selector switch. They remained this way until 1956, when the company switched to alder wood for Stratocaster bodies. There were also a number of ‘Custom Color’ finishes that were available by special order and a 5% upcharge. They were often DuPont automotive colors, some of the more popular ones being Candy Apple Red, Fiesta Red, and Lake Placid Blue, although many others exist and the list of them was not standardized until 1960. One of the most unique elements of the Strat design is the eight-screw plastic pickguard that allowed all the guitars’ electronic components except for the output jack to be directly wired to it, which made any sort of internal repair very easy to accomplish. Most of these design ideas are still visible in current production Stratocasters and have been widely copied by other guitar companies over the years.

Fender made Strats with the one-piece maple necks until mid-1959, when all the company’s guitars received rosewood fingerboards that were glued to a maple neck back. The main reason for the switch was customer demand, as Gibson guitars had rosewood boards and they were seen as more sophisticated, and that the original maple necks discolored from use very quickly due to the softness of the original nitrocellulose lacquer finish, although many years later, the worn-out fretboard look became very popular when Fender introduced the pre-aged Relic series of instruments. The original rosewood fingerboards were a 4.8mm-thick piece of the wood milled flat on one side and attached to the maple underside with glue and are known as ‘slab boards.’ These were made until mid-1964 when Fender switched to a pre-radius rosewood and maple combo known as the ‘veneer’ fingerboard due to some problems with slab board necks twisting and warping and this new design reduced that issue significantly. Maple board necks were available by custom order only and are today quite rare to find from this period. During this post-1959 period, the Strat, along with the other Fender guitars, received a three-tone sunburst finish. Many players feel that the rosewood board Strat with the three-tone burst is the zenith of the Stratocaster design and this combination is popular to this day. The rosewood board adds a little darkness to the Strats’ sound, which is nice to balance out the treble-heavy pickups Fender has always been known for and a 1963 slab board Strat in sunburst is the ultimate dream machine for tons of Strat-heads out there for this exact balance of good looks and great sound. The other big change in the Strat during this time was the switch from a single-ply eight-screw pickguard to a 3-ply 11-screw design.

Once Leo Fender sold the Fender Company to the CBS Corporation in January of 1965, a number of changes began to be made to the familiar Strat set of appointments. By 1966, the size of the headstock was increased and by 1967 a two-piece maple ‘cap’ neck was also available, along with the now-standard rosewood board. In 1969, the one-piece maple neck was again made available for the first time in a decade.
As the 1970’s rolled on, even more changes came down the line, some popular and some not. Two of the least popular were the three-bolt ‘micro-tilt’ adjustable neck and bullet truss rod designs, which are seen as hallmarks of the decline in quality that plagued many instrument makers in the 70’s and ultimately led to players seeking out older, better-made guitars and giving birth to now-out-of-control ‘vintage guitar’ phenomenon by doing so. One thing that became standard in 1977 was the now-ubiquitous 5-way pickup selector switch, which give Strat operators instant access to the ‘in-between’ #2 and #4 positions that previously could only be obtained by jamming the three-way pickup switch between its detents. Those sounds were totally unintended when the Strat was first thought of, but are now the go-to tones for lots of Strat fans and players.

During the early 1980’s, the previously mentioned ‘vintage guitar scene began to heat up and Fender emerged from a dark period of its history with new ‘Vintage Reissue’ models that re-created the guitars and basses that put the company on the map in the first place. Gibson also began to do this during this same period. Fender made a ’57 Reissue and a ’62 Reissue Stratocaster and the guitars were appointed for their appropriate eras. These early reissue guitars have shot up in value in recent years and are seen by many as the ‘second wave’ of vintage Fenders. Since then, Fender has continued to make Strats and scatter them about every price and feature range from entry-level Squire guitars to player-favorite American and Japanese-made production guitars to full-on custom and art guitars made by the Fender Custom Shop. One of the more popular (and at times controversial) of higher-end Fender guitars has been the pre-aged Relic instruments Fender introduced in the 1990’s. These brand-new but heavily-worn-looking instruments were made after Rolling Stone guitarist Keith Richards told Fender their guitars were ‘too new’ looking and that he wanted them beat up a bit. Relic Strats are intended, like the other guitars and basses in the series, to perfectly replicate a vintage Fender, including all the play wear it received from new until the present day. Some players love them and feel that they are the closest thing to a real vintage Strat that can be had but others feel that they mostly appeal to rich, middle-aged novice guitarists who are trying to ‘look cool.’ No matter which side of the debate you might be on, Relic guitars are very popular and are probably going to be part of the ‘Closet Classic’ Fender line for some time to come.

Where will the Stratocaster go in the future? Hard to tell, as most of us seem pretty happy with the guitars as they are and they are just as valid and able to play current music in 2011 as they were in 1954 when they first came on the scene. There are many variations on the theme in the Fender line, but they are not really all that different when taken in the big picture sort of sense. This was another instrument that Leo and company pretty much got right the first time and it has not really seen many big changes since that time, although the Roland-Ready Strats and VG Strats both give more than a tip of the hat to modern computer-based technology. For the most part, however, Strats remain Strats and that is the best thing of all, as they have become a major part of the sound of guitar music and they have been successful instruments for an amazingly wide variety of guitarists. If you don’t own one, you should and, if you DO own one, go play it and see if you can wring one more new song out of a guitar that has already given us so much great music.

How The Fender Stratocaster Was Made

Every year Fender attempts to recreate their classic Stratocaster or Precision/Jazz bass somehow. Whether they call it “road worn” and relic the guitar for you, or call it “closet classic” and make it with 100 […]