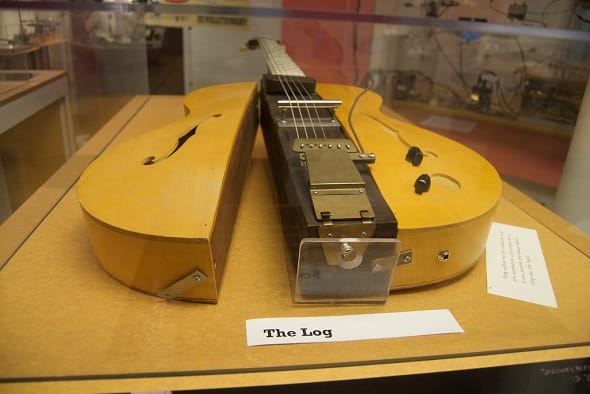 Les Paul’s The Log Guitar, circa 1939 is the guitar that came to bear Les Paul’s name

Around the same time that George Beauchamp and the other early electric guitar pioneers were active in southern California, a guitarist and radio personality named Les Paul (born name Lester Polfus) was in Hollywood working out his own vision of what the electric guitar should be.  Les became an established guitarist in the Thirties, performing country music under the names Red Hot Red and, later Rhubarb Red, and jazz as Les Paul. In 1939, Paul began to put together what he called “The Log,” a four-by-four length of solid pine to which he attached a Gibson neck, homemade pickups, a crudely fashioned bridge, and vibrato tailpiece. Like many other innovators of the guitar, Paul wanted to eliminate the uneven harmonic response produced by an amplified hollowbody guitar. 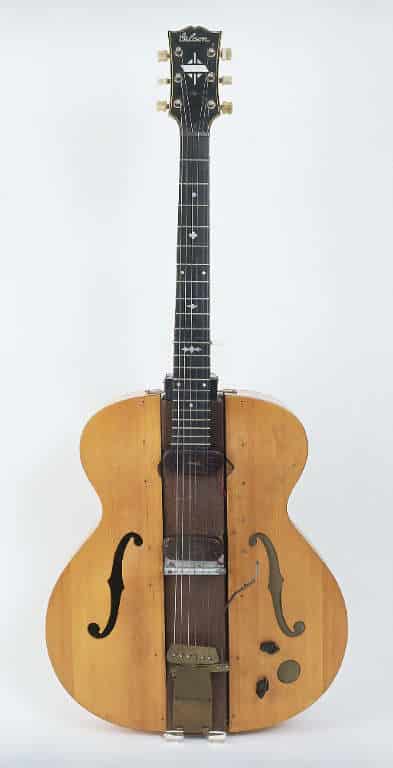 Although he sawed an Epiphone hollowbody in half and attached the two sides of his four-by-four block of pine, this was more for aesthetic than acoustic reasons—to make the thing look like a real guitar. This supremely quirky instrument, now enshrined in Nashville’s Country Music Hall of Fame, is another sacred relic of the electric guitar’s evolution, the product of an inveterate tinkerer and one of the century’s most original musical inventors. Paul also pioneered multitrack recording and anticipated the home recording boom by a good 30 years. 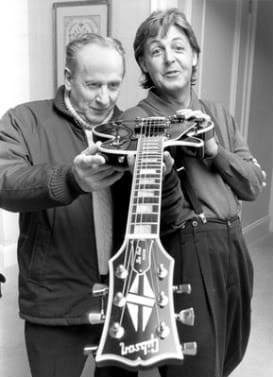 Les Paul used the Log on recordings he and his trio made with Bing Crosby, the Andrews Sisters and others. But when he brought the instrument to Gibson’s headquarters in Kalamazoo, Michigan, in 1941, they laughed at him. “I took the Log to Gibson and I spent 10 years trying to convince them that this was the way to go,” recollects Les. “But it wasn’t easy. If it wasn’t for Leo Fender, I don’t think that ever would have come off. Leo saw more in it that Gibson did.”

True enough. A venerable company, with origins tracing back to the 19th century, Gibson had taken a conservative, classicist approach to the electric guitar, producing electric archtop hollowbodies like the ES-150, which was introduced in 1936 and adopted by jazz players like Charlie Christian. Other “old school” manufacturers like Epiphone, Harmony, and Kay had taken a similar tack. But with the huge success of the Fender Telecaster in the early Fifties, Gibson decided to “go California” and get in on the solidbody market. Suddenly Les Paul’s Log didn’t seem like such a crazy idea. “Better go get that kid with the broomstick,” someone at Gibson is purported to have said.

The man who made it happen was Ted McCarty. A shrewd businessman with a good eye for design and a flair for building teams of like-minded visionaries, McCarty is another towering figure in the early development of the electric guitar. Originally a buyer for Wurlitzer, McCarty joined Gibson in 1948, and in 1950 he was made president of the company. It was McCarty who oversaw the design of Les Paul’s “LOG” Guitar.

Seeking to develop an up-market alternative to the plain, slab-body Telecaster, Ted McCarty came up with the idea of building a solidbody guitar with a carved maple top or “body cap.” He knew that the Fender factory didn’t have the machinery to do this kind of work. In 1950, McCarty brought this guitar to Les Paul, who approved the design, feeling it was right in line with what he’d been trying to achieve.  Ted McCarty reportedly said to his wife and musical partner, Mary Ford, “They’re getting too close to us, Mary. I think we better sign up with them.”

So great were Gibson’s reservations about getting into the Newfangland solidbody electric guitar market that the company at one point considered leaving its name off the guitar and just putting Les Paul’s name on. But they plucked up their courage, and in 1952 the first Gibson Les Paul model appeared on the market. It was very similar to the Les Pauls that are around today, with a few key differences. For one, it had a trapeze-style tailpiece.

This was a source of some contention between Les Paul and the Gibson company: Gibson wrapped the strings under the tailpiece’s crossbar in order to achieve lower action; Les wanted the strings wound over the crossbar so he could better execute the palm muting technique that became an important element of his playing style in the Fifties.

In the years that followed, Ted McCarty sought to broaden and diversify the essential Gibson aesthetic. Working with a local artist, he developed three revolutionary guitars—the Flying V, the Explorer, and the ultra-rare Moderne. Both the Flying V and the Explorer debuted in 1957 (the Moderne apparently never developed past the prototype stage). With their radical angular lines, these instruments were a bit too wild for the late Fifties. Although they didn’t sell well on their initial release, they returned with a vengeance later in the rock era.

In 1957, the Les Paul’s original P-90 pickups were replaced by a brand-new invention from a man named Seth Lover. The humbucking pickup featured two coils wound together to cancel out the hum that single-coil pickups generate under fluorescent lighting and in other dodgy electromagnetic circumstances. The humbuckers produced a bass-heavy, “dark” tone which combined with Les Paul’s heavy mahogany and maple body wood and traditional dovetail neck joint to create a distinctly rich tone that would come to be identifiable as “the Gibson sound.”

McCarty went in a completely different direction with the Gibson ES-335, the guitar that pioneered the concept of the semi-hollowbody electric. The thin-line body has much less depth than a conventional archtop, which seems bulky in comparison. This significantly reduced the potential for feedback that has always hounded full-sized electric hollowbodies. McCarty also came up with the idea of having a solid block of maple running down beneath the pickups. (The Log revisited!) The result was an instrument—also still very much in use today—that combined many of the best properties of solidbody and hollowbody guitars.

The Gibson Firebird guitar and bass, which came along in 1963, were among Ted McCarty’s final triumphs for Gibson. He left Gibson to take charge of the Bigsby company in ’66 and also became the mentor of Paul Reed Smith (PRS Guitars), whose guitar company produces several models named after McCarty. 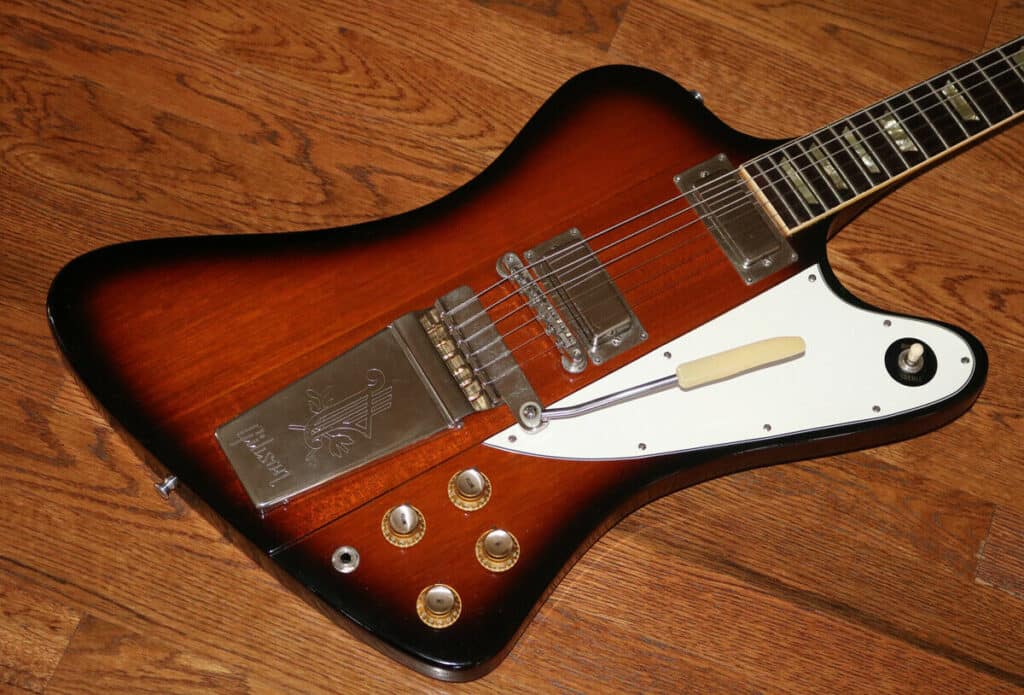 Ted McCarty hired automotive designer Ray Dietrich to create the Firebird’s parabolically curvy body shape. By this point in the century, electric guitars were vying with cars as the same ultimate symbols of modernist, space-age flash. The Firebird is markedly similar to Fender’s sporty Jazzmaster and Jaguar (introduced in ’57 and ’62, respectively). Over at Fender, George Fullerton had come up with the idea of offering the Jazzmaster in custom automobile-style colors like Fiesta Red and Lake Placid Blue. “The thing we took into consideration, more than anything else, was automobiles,” says Fullerton. “You’d see a new car that had a candy apple red or blue sparkle finish, and people would say, ‘Wow, did you see that color they have on the new Chevy?’” 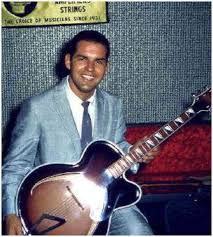 In the annals of 20th-century guitar design, special mention must go to Roger Rossmeisl, a German luthier who moved to America in the Fifties. Here, he combined solid craftsmanship with a flair for the unusual. Rossmeisl’s late-fifties work for Rickenbacker imparted tremendous stylishness to that company’s designs, including those ultra-coll cat’s-eye soundholes. In the late Sixties, for Fender’s Wildwood series, Rossmeisl came up with the idea of injecting live trees with colored dye and then harvesting the trees to make guitars whose finishes boasted natural woodgrains in some garishly unnatural hues. In the late Sixties drug counterculture, the idea of some guy running around injecting trees caused considerable mirth and gave new meaning to the phrase “shoot up the forest.”

Photo courtesy of Vintage Guitarz
“This is an early reverse Firebird V, one of 62 made in 1963. The first few reverse bodies were made with a very streamlined, stark appearance…two piece neck through body construction, plain white guard, and more angular body with sleek, slightly thinner, elongated horn. I’ve never seen another ’63 in this condition. This is without a doubt one of the rarest solid body electrics ever shipped by Gibson. Of the few shipped and at least half have received neck breaks that these are prone to so there are probably no more than a couple dozen or so of these that have remained unscathed… The exclusiveness of this guitar is very close to Flying V and Explorer territory as far as numbers go. It is in superb condition.”

The recent passing of guitar legend Les Paul, who, in many ways, made the music world the way it is today, left a hole in the guitar community that will never be filled. Epiphone, being […]

When Gibson’s legendary ES-335 was born in 1958, it was hailed as an innovated instrument – and was a guitar of an instant hit with players alike. The revolutionary design managed to offer guitarists the […]