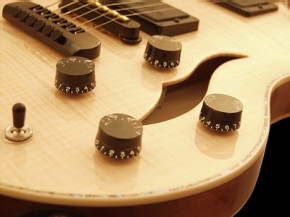 Semi hollow body guitars also known as semi acoustic or semi solid guitars are essentially electric guitars which offer a best of both worlds of sorts. They were created especially for players who wanted the resonance of a hollow body while having the feedback resistance, bite of the solid body guitars. As it has a solid block of wood running through the center with hollow body “wings” on both sides. The result is what is now popularly known as the Semi-hollow body guitars.

As said above, the semi-hollow body can offer the best of both the acoustic while negating on the feedback issues that are seen at higher volumes, along with the bite and sustain of a solid body. Some other of its advantages includes, has a thinner body than standard acoustic guitars, allows hollow-body like resonance and is lighter than a solid-body.

What is a Semi-hollow body ideally suited for

Since the dawn of shredding, guitarists have searched for an electric guitar that easily lends itself to intense playing. When one decides to take the path less traveled (at least in mainstream music), gear becomes […]