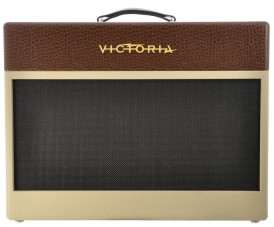 The Victoria Amp Company has made quite a name for itself in the guitar business since the 1990’s, when company prez Mark Baier launched the line with the 50’s Fender tweed reproductions that made him a household word and helped to invent the boutique amp business as we know it today along the way. Though he still makes the tweeds, Baier has moved into vintage inspired original amp designs in recent times, one example of these being the new Golden Melody 2×12 combo amp.

The Golden Melody puts out 40 to 60 watts of 6L6 power and is a blending of Fender Bassman, Twin, and Super Reverb tones with a brownface Concert’s tremolo circuit thrown in for good measure. Its main job in life is to produce major amounts of stage volume while feeling and responding like a low-wattage tube amp. It does this by combining its power section with a locally-built transformer, audiophile-grade capacitors, and two Warehouse Guitar Britlead 12-inch speakers, which add British upper-mid aggression to the Fender-ish signal path.

The Golden Melody produces glorious tones throughout its entire volume range and sounds especially great with single-coil pickups running through it. It remains clean until pushed and then turns dirty and creamy, with a thick sound with many pleasing overtones. The on-board Accutronics spring reverb is lush and pleasing, but the tremolo really steals the show, being a modded version of the company’s famous Reverberato design. At $3495.00, it ain’t cheap, especially for a single-channel amp, but what a channel it is. The Golden Melody is for those seeking loud and proud vintage tone to whom cost is no object. It is a truly rock-star-quality amp that will put an all-day smile on the face of anyone lucky enough to plug into one and turn it up loud. Tip – how to choose the right guitar amplifier for you?

Both here at GearVault and elsewhere in the guitar playing community, the name Malden has been developing a great deal of hype in the last several years. The company first gained widespread exposure through their […]