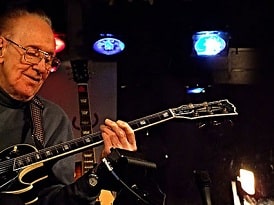 The world has seen many advances in music technology in recent years, but if you dig down about 80+ years ago, you’ll find a young curious boy tinkering with electronics. He would be the reason that the solid body guitar and multi-track recording exists. His name was Les Paul.

At the age of eight years old, Les Paul was interested in music, and started off playing the harmonica. Fast forward 11 years, and he was in Chicago, playing on the radio. Les had an avid ability to hear things that others did not, and appealed to listeners all around. Playing mostly country and jazz, Paul had always been playing on archtop guitars, because that’s all that existed. This would all change soon enough.

Les didn’t enjoy the sound of the archtops. The body resonated the sound of the strings too much, and made the instrument feedback when playing at louder volumes. He wanted to change that. Once he realized that a solid piece of wood would end this inconvenience, he invented what we now know as the Gibson Les Paul. The first version of the guitar was built in the Epiphone factory in 1940, and when Gibson decided to market it, it became an instant success. Without the Les Paul, who knows what Jimmy Page would have played… would it have been a Stratocaster?Seems pretty weird to me…

The other thing that Les Paul had a great influence in creating was the concept of multi-track recording. With the help of his wife Mary Ford, they recorded and sold millions of records using this technique. This practice eventually led to Paul creating the first multi-track recorder that was built by electronics manufacturer Ampex.

Now I know many will argue that Les Paul wasn’t the first to do this or wasn’t the inventor of multi-track recording, but the fact remains that the guy had an INSANE amount of influence on the music world today. Without him, things would be SO different, and I really don’t know if multi-track recording would actually be in the state it’s in right now. Even if you can’t agree with me on that, one thing is for sure: THERE WOULD BE NO GIBSON LES PAUL! It’s one of the most popular guitars in the world, and the sound that it makes is one of the most iconic in rock n roll history. Denying his legacy is simply… a disgrace.

Les Paul passed away in 2009. I never got to see him play, and I truly regret it. I would have loved to have met such an incredible person, one who had such an immense effect on music. Les Paul was truly an innovator, and who knows if the world will ever see someone so ground-breaking for years to come. Epiphone Guitars created a Epiphone Les Paul Tribute guitar to honor Mr. Les Paul.

LTD FX-260 Explorer-style axe hands-on review — the LTD FX-260 guitar feels like a weapon caressed to your body while playing. With its woodsy look, it might even spark a flashback to the days of […]

The Brownsville Choirboy and Thug are one-of-a-kind hollowbody guitars that are classically designed, low noise, single-coil pickups. Both guitars feature a slim, hard maple neck with 24-3/4 scale length and a fast rosewood fingerboard. The […]

Phil Demmel of Machine Head teamed with Jackson Guitars and integrated an element of masochism to conceive a dangerous new breed. Demmel’s legendary riffs smash us over the head like an annihilated sledgehammer, slaying our […]