The history of Pink Floyd has been told many times but never in the way that Phil Taylor tells it. His book, Pink Floyd, The Black Strat, A History of David Gilmour’s Black Fender Stratocaster, is a real-life rock and roll story filled with color and excitement, told through the vicissitudes and fortunes of a single musical instrument. The instrument in this instance is a black Fender Stratocaster belonging to David Gilmour, and the story is one of the greatest in the annals of classic rock: the Floyd’s meteoric rise to popularity in the Seventies, their enduring appeal over the decades and historic reunion in 2006 to perform at the Live 8 benefit concert in London’s Hyde Park.

The black Strat was Gilmour’s main ax for the four blockbuster albums that form the zenith of Pink Floyd’s career: The Dark Side of the Moon, Wish You Were Here, Animals and The Wall. Gilmour played the instrument at countless Floyd concerts down through the years, including Live 8, and it has figured on the guitarist’s three solo albums to date.

Phil Taylor got to witness all of this from a privileged perspective. He has been Gilmour’s guitar tech since 1974, also serving as Pink Floyd’s general equipment manager at various periods. These days, Taylor also manages Gilmour’s recording studio, Astoria, located in a houseboat on the River Thames, and Pink Floyd’s vast equipment warehouse. Along with all this, he served as production director for Gilmour’s last solo tour and Live 8.

Taylor had never planned to become an author, but when the Fender Custom Shop set about creating a replica signature model of Gilmour’s black Strat, Taylor began to research the instrument’s history to help Fender put together some documentation to go with the signature model. That research eventually grew into a book.

“A friend of mine [Langley Iddins] who is a very good book designer suggested I turn it into a book and he offered to lay it out for me,” Taylor explains. “Which hadn’t occurred to me. I thought, ‘Too much effort. I haven’t got the time to do that.’ But to cut a long story short, he talked me into it.”

Longtime Pink Floyd art director Storm Thorgerson, the man responsible for the iconic cover art for discs like Dark Side, Wish You Were Here and Animals, volunteered to design the cover for Taylor’s book, in which the black Strat is seen on a northern Arizona cliffside, amid sweeping contours carved in the reddish stone by wind erosion. In all, it’s a handsome coffee table paperback. But the one person initially reluctant to get behind the idea was David Gilmour himself.

“He said, ‘Why do a book on that?’ It’s only an ordinary guitar I bought at Manny’s,’” Taylor says, referring to the famed New York City guitar shop. “And that’s the way he’s always treated it.”

But the ordinariness of the instrument is what makes the story poignant in a populist kind of way. It could have been anyone’s guitar. It started out as a History of the Fender Stratocaster, serial number 266936, which means it’s from Fender’s CBS era—not the most desirable period in Fender history. And indeed Gilmour purchased it at Manny’s Music in 1970, as a replacement for a Strat stolen a few weeks earlier in an equipment heist that cleaned out Pink Floyd’s equipment truck. It was, in essence, an emergency purchase. In the years that followed, the guitar became Gilmour’s main workhorse. He took it on the road with him, swapped pickups and necks, and drilled holes in the body to accommodate various add-on devices. He once called it his “bodge-up guitar,” the one he hacked up for experiments. 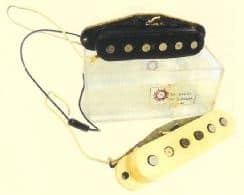 “The guitar was never treated with any reverence at all,” Taylor says. “It was just a working tool.”

Taylor’s book lovingly details all six neck changes the guitar went through over the years, plus numerous replacement pickups, hardware change-outs and other modifications. We learn not only on which legendary Floyd tracks the guitar was played but also the exact configuration of the guitar at the time each track was recorded. In addition, Taylor elaborates on the gigs at which the guitar was employed, detailing the dates, audience tallies, set lists, press reviews and other train spotter trivia that seem so endlessly fascinating to the hardcore Floyd fan base. A few other Gilmour guitars enter the narrative at various points but mentioned only in relation to the black Strat. Gilmour’s vast guitar collection is the stuff of legend, but The Black Strat maintains a tight focus on the titular instrument.

By the time Taylor joined the Pink Floyd team in 1974, the guitar had earned its keep on the Floyd albums Atom Heart Mother; Meddle, Obscured by Clouds and Dark Side of the Moon, and at numerous live shows. Gilmour had wielded the black Strat on the all-time favorite Floyd instrumental recording “Echoes” and used it to play two of the three solos on the band’s Dark Side of the Moon hit “Money.” By the time the instrument came into Taylor’s care, it had already been heavily modified and definitely had experienced more than a few trips around the block.

“It was pretty chipped about, actually,” Taylor recalls. “It hadn’t been looked after. I can remember, early on, getting a black felt-tipped pen and just coloring in some of the chips on it, ‘cause it looked so bashed around the edges—bare wood showing in various places. I remember just trying to tidy it up a bit.”

For Taylor, working with the gentlemanly, impeccably mannered Gilmour has been a dream gig. “I don’t know if David’s ever even shouted at me,” Taylor says. “He’s very laid back. Very restrained.”

And he knows his way around guitars. In the earlier days, Gilmour performed all modifications to the black Strat and his other instruments. “These days, he won’t mess about with his guitars too much,” Taylor says, “although he will pick up a screwdriver and alter the intonation or pickup height if needed. He’d never think twice about doing something like that. He had done a bit of woodworking as well, in his spare time, as a hobby. So he’s not afraid of delving in there.”

Gilmour had a DiMarzio DF1 pickup installed in the black Strat’s bridge position just in time for the sessions that produced 1977’s Animals album. And in 1978 he had luthier Grover Jackson at Charvel fashion a custom maple neck for the guitar. Thanks to Taylor’s book, we learn that Gilmour paid the not-so-princely sum of $175 for the neck. We can even read the original purchase order and invoice.

The black Strat was outfitted with this neck when Gilmour laid down his landmark guitar solo for the Floyd classic “Comfortably Numb” during sessions for The Wall album at Super Bear studios in France. But by the time the band embarked on the legendary tour for The Wall, the guitar had morphed again and sported a new custom Seymour Duncan pickup in the bridge position.

And so it goes. A Kahler tremolo bridge was added in ‘83 and also a new 22-fret Charvel neck. Gilmour played the guitar in this configuration on his second solo album, 1984’s About Face. Shortly afterward, however, the instrument fell out of favor. During the 10-year period from 1986 to 1996, it was on display at various Hard Rock Cafe locations, a humble fate for a guitar with such an esteemed pedigree. Thanks to Guitar World for the report.

The black Strat as it appears today. The black pickguard was added in the summer of 1974 and the recessed toggle switch fitted in 1978. Other changes include a short 4 1/4-inch tremolo arm and a white Seymour Duncan SSL-1 bridge pickup. The other pickups are original. (inset) Gilmour with the black Strat 1971. 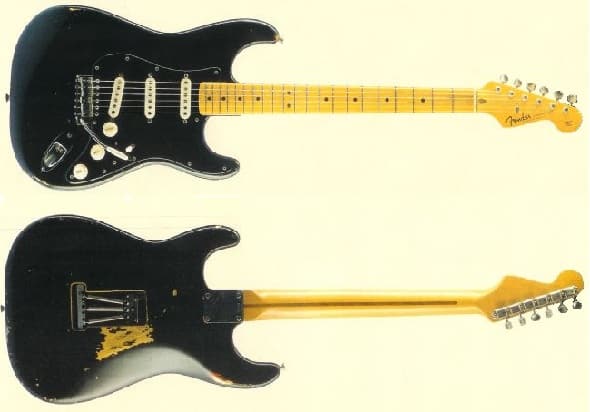 The back of the black Strat today, showing additional routing in the cavity. In 1976, Gilmour installed a black DiMarzio FS-1 pickup in the bridge position, replacing the original stock Fender pickup (Shown above). The guitar was used in this configuration for the recording of Animals and the subsequent tour.

Gretsch name conjures up images of big-bodied guitars, with cool names like White Falcon, Black Phoenix and Country Gentleman being put through their paces by legends like Beatle George Harrison, 50s rock ‘n roller Eddie Cochran and king of rockabilly Brian Setzer. But there’s more to Gretsch than big fat guitars with f-holes and Bigsby vibratos. Back in the 60s the company produced a solid-body electric guitar named the Corvette […]

Epiphone Prophecy Futura EX Gibson is a huge name in the guitar world, with millions of guitarists who proudly play Gibson guitars. However, Gibson guitars are also quite pricey—with some of the mid-range models […]