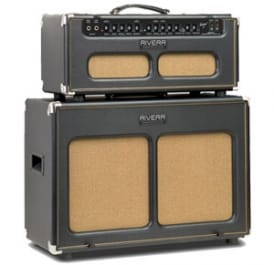 Rivera Venus series has been making big waves in the amp world, and with good reason. The Venus amps are the company’s first foray in Class A designs and they are taking things way beyond the typical Vox-derived flavors that many players think of when they hear the term. The newest amp in the line is the Venus 5.

The Rivera Venus 5 pumps out 50 watts of 6L6 Class A power through two independent channels and five 12AX7 preamp tubes. The lead channel has tons of available gain on tap, enough to cover anything from blues to heavy rock, while the rhythm channel has lots of headroom to keep things crisp and clean.

A footswitchable Accutronics reverb also comes standard. This makes Rivera Venus 5 one of the most versatile amps in the Rivera family, which is really saying something, as Rivera already has a reputation for covering a lot of ground with their amp designs.

Other cool features found on the 5 include a Vintage/Modern switch, which cuts the output power down to 15 watts for smaller venues or recording while enhancing even-order harmonics, a line-out jack for slaving another amp or direct recording, and an active effects loop with send and return controls.

All of this adds up to an amp that gives its users the ability to sound however they need to sound without carting a ton of amps around. Consider, also, that Rivera Venus 5 is available in head and combo form and this may just be the last amp you will ever need.

The Rivera company really seems to coming into its own in the last few years, with amp designs that go beyond imitation and show real creativity and vision. Those in the market for a higher-end amp with a unique and usable personality would do well to test-drive Rivera Venus 5; it may be just what the doctor ordered.

This mongrel duo is a mixture of sweetness and range. The Brownsville Choirboy is a well-behaved instrument that puts hollowbody jangle within most musicians’ budgets. Its bound body is charitably outfitted with three “toaster-top” pickups and a five-way selector, from which you can order up oodles of focused jangle, ranging from tight bit to silky jazz. The bolt-on maple neck has a pleasing profile and a plateless heel for upper-fret comfort, all of which is graciously aided by an adjustable bridge and truss rod […]

REVIEW — Mesa Boogie MARK V is really a collection of amplifiers. There are far too many circuits and sounds to think of it as merely an amp. It is also a living legend of […]