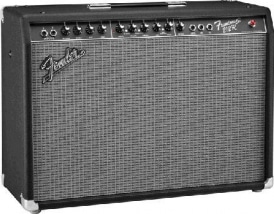 The Fender Frontman 212R is a 100 watt combo amp that features Fender’s classic Blackface styling, a pair of Fender’s Special Design 12” speakers, built in spring reverb, and easy to use controls. But there is no need to worry, just because it is simple does not mean that it lacks versatility. The Frontman 212R also is a channel switching amp that features two separate channels, which gives you the ability to go from the classic Fender chiming to gritty distortion. And for those players who want just a bit more from the drive channel, The Frontman 212R also has a third “More Drive” feature to give your distorted sound a little more oomph.

The 212R also includes a built-in effects loop, and dedicated controls for EQ on both channels.

Fender has hit a home run with this great sounding, affordable combo amp (which lists for around $300 USD). Whether you play rock and roll, country, blues, ska, punk or jazz, the Fender Frontman 212R has got your tone covered.

Alex Lifeson is known to have played a tremendous number and variety of guitars throughout his career, and even on one record – in the making of Rush’s 2002 release, Vapor Trails, Lifeson used 50 […]

Power Trippers Anyone who’s familiar with PA systems knows how difficult they are to transport and how costly they are to purchase and maintain. In addition to a power amp, mixer, speaker cabinets and microphones, […]