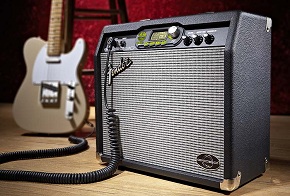 By nature, humans aren’t pro-active. Expending energy to avoid potentially impending doom just isn’t our way. So it’s no surprise that guitarists typically won’t take an amplifier in for service until it makes fart noises, shoots sparks from its backside or fails to deliver the slightest whisper of sound. That’s when we park our workhorse into the car, drive it to the nearest repair shop and demand that they have it up and running in time for the 8 p.m. soundcheck.

If you use your amp frequently (say, three or four nights a week), it’s going to need regular maintenance, just like your car and just like you. Older and vintage amps can fool you; after all, they sounded good enough for you to buy them in the first place. But don’t assume anything: amps run on high voltage, which takes a toll on critical components. What more, your amp is your sound; it’s what enables you to be heard, and the second it dies on a gig, you’re going to be silenced. And, I might add, seriously bummed.

A basic understanding of how amps work can help you make educated decisions when repairs are required. For example, in a tube amp, the primary gremlins to keep an eye on are resistors, capacitors, and tubes. Your amp uses a lot of these, and, like batteries, they don’t last forever. As they wear out, we experience problems like noise, hum, crackles, and low volume. The trick is to determine what parts need replacing before they actually fail.

Let’s assume that, being a human being, you’ve neglected to have your amp checked out, and now you’re experiencing a problem that needs the attention of a repair tech. Many techs will fix the faulty component without checking to see if other parts are showing signs of wear. Since you’re paying for the labor of having your amp opened up, you may as well have the tech perform a full-service check that includes all of your amp’s components. This is especially worthwhile if the amp in question is older of vintage.

What potential problems could this reveal? Let’s say your amp is stocked with old tubes, which, despite their age, deliver a good tone, even when cranked up. What you can’t tell at this point is whether one or more of the tubes is on the verge of shorting out. Short out a tube and you could blow your output transformer; blow your output transformer, and you’ve got one big repair bill. So what’s smarter—keeping your tubes fresh or having an output transformer commit suicide? Besides, new, quality tubes and fresh components sound better and last longer.

Here’s another example: Let’s say you have a bad screen resistor on one of your output tubes (screen resistors see a lot of high voltage in their lifetime.) Even if just one screen resistor fails, it’s a good idea to replace all of them since, chances are, they’re all the same age and have had the same amount of usage. The same preventive measures should be taken with filter caps, coupling caps, plate resistors for pre-amp tubes and a lot of related components that come in contact with high voltage.

Many amp enthusiasts, especially vintage amp enthusiasts, will argue that the vintage sound you enjoy is partly the result of those old components. While that may be true, it’s certainly risky to rely on vintage parts, considering the potentially irreversible damage that can occur when they go bad. There’s no doubt that the vintage amps are worth more with their original parts, and if you play them only occasionally, it might make sense to leave them as close to original as possible. But if you play them often, you’re just asking for trouble if you don’t take preventive measures. I have owned a number of vintage amps, and I’ve never taken one in for service and not had it returned to me sound better. Besides, you can always tell the repair tech to return all the original parts to you after they’ve replaced them. Should you decide to sell the amp, you can have any original parts that are in working condition reinstalled in the amp, or give them to the new owner. Read: Tube Amps vs. Solid State Amps

An electric guitar’s sound is deeply influenced by its pickups. For a musician who has little or no knowledge of electronics the matter can often seem to be incredibly complicated. When it comes to electronics […]

When it comes time to buy a new amplifier, many players are bewildered by the number of different choices and possibilities they need to investigate in order to find their new ride. One of the […]

We all love guitar gear, right? That’s why you are reading this and also why I am writing this. We all love to chase tones, build rigs, obsess over what we don’t yet have, and […]