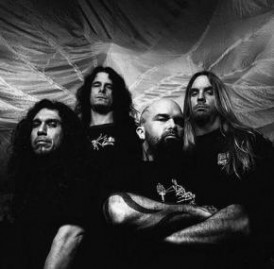 Kerry King and Jeff Hanneman’s paint-splattered Gibson Les Paul Standard and BC Rich Mockingbird have much to answer for. After all, they’re the axes that helped launch Slayer’s now infamous legacy of brutality. “That Les Paul was defiantly my first real guitar,” recalls Jeff Hanneman. “I had a couple of clunkers before that but nothing that really played that well or even stayed in tune. I bought it off a friend for $500, I’m not sure when it was made but it was in great condition when I first got it. Since then I’ve pretty much beat it to hell,” he laughs.

“I put a Seymour Duncan pickup in the bridge position—I can’t remember which on but it may have been a Distortion,” Hanneman continues. “I had a Kahler tremolo put on her, too. Actually, the guy who put it in for me was the first guitarist in Megadeth, Chris Poland. I think he did it for 50 bucks! To do the paint job I taped up the pickups, dipped a stick in some red paint and just splashed it on there. I think I screwed some chains on her for awhile, too.”

Hanneman’s Les Paul appeared on both Slayer’s debut, Show No Mercy (1983), and the Haunting the Chapel mini album (1984). “It might have showed up on a couple of songs after that but I retired it before Reign in Blood (1986),” he says. “Like I said, I’d pretty much beat it to shit. I used to drop it on stage and let it bounce and I’d drag it across the stage by the lead too. I think it’s still playable but the neck is pretty tweaked!”

“My dad got me that ’77 BC Rich Mockingbird when I was about 16,” says Kerry King. “That was before strap-locks were real popular, and one time it just fell down and broke the headstock right off. I didn’t know what to tell my Dad! I was like, ‘Oh man, I might just as well move now, because I’ve got a gun shot coming to my head! He was cool about it, though, and we took it to the BC Rich factory to get it fixed. They put three rods in the neck where the head broke off, and we had it painted red too. It was natural koa wood before that. Had I known how cool the guitar was at the time, I’d have probably never had it painted.”

Like Hanneman, King had a Kahler whammy system added ti his guitar but left the pickups alone. “I’m pretty sure they’re the stock DiMarzios it came with—probably a Super Distortion and a PAF .” Also, like Hanneman, Kerry added his own personal touch to the axe. “I don’t think I did mine because Jeff did his, but it’s so long ago I don’t remember,” he laughs. “I got a little eight-ounce can of black paint, stuck a drum stick in it and dribbled paint all over the guitar—very musical!

“I used it on Show No Mercy, Haunting the Chapel and Hell Awaits (1985). I might have also used it on some Reign in Blood, but by then it was pretty much retired and replaced by a Warlock.”

B.C. Rich is back with a firestorm of new signature models created in collaboration with Kerry King, legendary guitarist for Thrash Metal titans Slayer. Four new models are available, each bearing finishes, features and tones […]

B.C. Rich has announced a new series of handcrafted guitars that celebrate their 40th anniversary as an instrument manufacturer. If specialized instruments are your bag – and money is no object – read on, dear […]

When you think of B.C. rich, you think of Warlocks, Biches, Mockingbirds, and Seagulls—but not acoustic guitars. Nevertheless, Bernie Rico started out making acoustics in the late 1960s and early ‘70s, long before his name […]