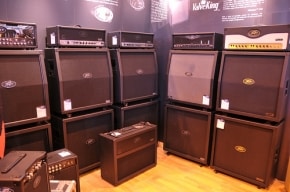 Guitars are simple, right? Most of us know what we like, which family tree (Leo or Orville) our axe of choice descends from, and all of that. Amps, however, are another matter, entirely. There are more types of guitar amplifiers available today than ever before and, to the uninitiated, picking the proper amp to suit our musical and financial needs can seem like a crapshoot. Well, we here at Gear-Vault feel your pain, understand your plight, and are here to help. Please find below a thumbnails’ worth of information that will hopefully make choosing the right amp for the music you play a little easier.

Solid State – These amps use transistors to run both preamp and power amp sections and first came to market in the late 1960’s. While they have made many great strides since then, they are still better at producing clean tones than distortion, although some players would argue that. They are also very low maintenance, fairly light in weight, and are often favored by players who need a reliable gigging amp, as they can usually take a pretty good beating.

Tube Amps – The standard by which all amps are judged. The guitar world fell in love with tubes when they were the only thing available to run an amp on and the affair is still going strong decades later. Tube amps have a sound and feel that is still difficult for even the best amps using more modern technologies to emulate. They seem louder than a solid state unit of equal power, but are heavier, more expensive, and require some maintenance from time to time, as tubes do not live forever.

Modeling Amps – These amps use digital technology to recreate the sounds of tube amps. Their internal software allows users to dial up passable versions of many of the great guitar sounds of history. They also usually have effect models built into them, too, and can cover most of the sounds players typically use bulky pedal boards or rack units to generate. They are an excellent choice for guitarists who need a wide range of sounds on their gigs.

Hybrid Amps – The best of both worlds. There are many amps that use a combination of solid state or modeling with tubes to reach a compromise that takes into account sound, dependability, price, and versatility. Marshall Valvestate amps and the Line 6 Spider Valve series are good examples of this.

CONFIGURATIONS – An amp with both electronics and speakers in the same cabinet is called a ‘combo’ and is the simplest and easiest amp to understand. Plug it into the wall and get going. Combos range from small to large and hit all price points. An amp with a separate head (or top) and speaker cabinets is called a ‘stack’ for obvious reasons and allows players to mix and match speakers and heads very easily. They also split the weight of the amp into discreet pieces that can be easier to move.

CONSTRUCTION – The way the cabinet an amp is housed in is built makes a big difference the tone the amp will put out. Thinner wood (or particle board) will sound thinner and will be more prone to rattling, especially in a combo. Wood of at least ½ inch thickness will sound better and help to keep speakers from moving around too much. Another factor is whether an amp has an open or closed back to the speaker section. An open-back design will be more airy and loose and a closed-back design will have more tightness and bottom end. Choose wisely.

POWER AND SPEAKERS – Amps made for practicing at home will generally be lower in power and use smaller speakers than amps made for live gigging. When choosing an amp for playing out, the proper amount of power is determined by figuring out how much clean, distortion-free headroom is vital to your gig. A blues player who wants an amp to sag and distort can use a lower-powered amp than a funk or country player who needs to be loud and clean. Speakers used in guitar amps are usually 10- or 12-inch pieces, with 10’s being a little more top-end oriented and 12’s delivering a bit more bass.

OTHER CONCERNS – Depending on your taste, amps can be selected with or without built-in reverb. This is purely a personal choice. Reverbs can be either spring or digital. Effect loops allow devices to be patched into an amps’ circuit after the preamp section to cut down on noise. Old-school amps like a Fender Bassman are a single-channel affair, which means one set of knobs making one sound. More modern designs offer two or more switchable channels to provide more tonal options. Some solid state and modeling amps offer other on-board goodies like multi-effect units and tuners.

Confused yet? The amp world can be very complex and confusing but hopefully the above points will make deciding on an amp a bit easier. Tally up your wants, needs, and desires and go play a bunch of different amps and you will bring home a winner.

British Amplifiers are happy to reveal that a limited edition Golden Anniversary reissue of the world famous Watkins Dominator V Front guitar amplifier has been released. In celebration for 50 years of the Watkins Dominator, […]