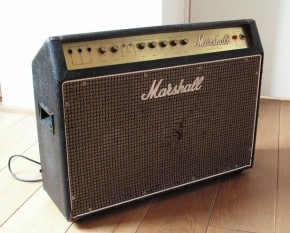 Of course the electric guitar wouldn’t have developed at all had it not been for amps. And the guitar amplifier would never have come into being had it not been for Mr. Lee De Forest, who invented the vacuum tube, for which he was granted a patent in 1907—just in time for the 20th century. The vacuum tube made possible many of the century’s great inventions, including radio and television, but it has found its most enduring home in the electric guitar amplifier.

And when it comes to amps, as well as guitars, the man who laid much of the foundation was Leo Fender. Having been a radio repairman in the Forties, Leo knew a thing or two about tubes. He was building guitar amps as early as 1947, adapting designs from RCA tube application manuals. The basic circuits he devised were made increasingly more powerful and gave rise to amps like the Fender Pro, Champ, Bassman, Vibrolux, Showman, Deluxe and Twin, all of which were hugely influential of the developing sound of rock and roll in the Fifties and Sixties. Many manufacturers copied and adapted Fender’s designs with varying degrees of success.

The mid-Sixties British Invasion made England more of a player in the development of electric guitar technology, particularly amplification. Designed by Britons Dick Denney and Tom Jennings, the Vox AC15 (introduced in ’57) and AC30 (introduced in ’59) used a completely different output circuit (a Class A cathode bias push-pull configuration, if you must know) than the Class AB design Leo Fender had taken form the RCA manuals. As a result, it created a distinctly different tone, one that became widely popularized by the Beatles’ use of Vox amps in their career.

By the mid-Sixties, transistors had begun to replace tubes in all kinds of electronic devices, including guitar amps. But, with a few notable exceptions, transistor amps just weren’t as conducive to the sound of rock music, which been invented on tube amps. Guitar amplification did make a quantum leap in the mid-Sixties, but it had nothing to do with transistors. It came, instead, from an even more unlikely source: a drummer, drum instructor and London music proprietor name Jim Marshall.

The origins of the Marshall amp are humble enough—retrogressive even. It began when a London roadie and Marshall’s customer name Ken Bran persuaded Jim Marshall that it would be feasible, and profitable, to copy the Fender Bassman using English components and sell the amps through Marshall’s shop. The English components and tubes (or valves, as they call them over there) yielded different tonal qualities than American amps like Fender. Sensing the germ of something good, Marshall began exploiting these qualities to develop his own amp designs. As the proprietor of one of the few London music shops that was friendly to rock musicians at the time. Marshall was very plugged into what young rock and blues guitar players were looking for. An early version of Marshall’s JTM45 combo amp was purchased by Eric Clapton and used on the profoundly influential Blues Breakers with Eric Clapton album.

Another key Marshall innovation was the closed-back cabinet loaded with four 12-ich speakers. The Who’s John Enwisle, ever on the lookout for ways to make his bass louder, was an early and eager advocate of this design. “I didn’t actually buy the first one,” he recalls. “That went to a guy name Rupert, the bass player in the Flintstones, a band who had a couple of minor hits in England at the time. But I did buy the second one Marshall made. And the fourth and the seventh and the eighth. Pete Townshend bought all the ones in between. I’d buy one, then Pete would buy one. I’d say, ‘Is it loud enough yet? Fuck, I’ll buy two more!’”

It was Townshend who persuaded Jim Marshall to build his, and the world’s, first 100-watt guitar amp—a momentous even in the history of rock and roll. Townshend recollects: “I went into Jim Marshall’s, stomped down my Fender Bassman and said, ‘I want that, only twice as loud.’ And almost like Krupps, the famous military manufacturer, Jim Marshall’s eyes lit up, and he said, ‘I will supply this man with he weapon.’ And from that came the Marshall stack and the big amplifiers of the Sixties.”
All that wattage brought astounding new amounts of sustain, and harmonic overtones nobody had ever heard before. It also made hollowbody and semihollow electrics more prone to feedback than before. Solidbody guitars surged in popularity, and a Les Paul or Strat through a Marshall became the standard rock guitar rig.

By the early Seventies, companies like MXR and Electro-Harmonix had come out with a wide range of affordable effects—phase, flanging, chorus, delay…the icing on the cake. From a rock and roll perspective, the electric guitarists hardware and tonal range had reached their classic form. The developments of the last 35 years have essentially been refinements of this winning formula. It’s no coincidence that this formula fell into place right at the height of what we now think of as the classic-rock era. Musical instruments often develop in close connection with a given musical movement and style. Just as instruments like the lute, viol and harpsichord reached their height during the early 18th century baroque era, the rock guitar setup reached its peak somewhere between the midpoint and three-quarters mark of the 20th century.

Does this mean it will eventually decline and become a museum piece, just as those baroque instruments have? Probably not in the near future. Here at another century’s new beginning, the electric guitar and its attendant panoply of gear show no sign of dying out. Young rock musicians today are creating new sounds out of keen sense of the classic rock guitar heritage. Others have their samplers trained on the rock guitar legacy. Those sounds are with us everywhere we go. Not only is the guitar way louder than George Beauchamp’s wildest dreams—it is also a far more vital part of our culture. Visit our community boards at Gear-Monkey Message Forums

Les Paul’s The Log Guitar, circa 1939 is the guitar that came to bear Les Paul’s name Around the same time that George Beauchamp and the other early electric guitar pioneers were active in southern […]

Custom Audio Electronics is the brand name of amp/guitar system guru Bob Bradshaw, whose high-end rigs have been seen on the world’s biggest stages with major stars playing through them since he launched the company […]