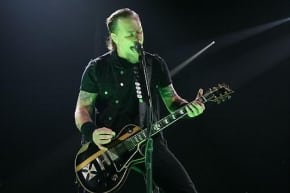 It was officially unveiled at Winter NAMM 2009 in ESP edition only. ESP has no future plans of making an LTD version of the Iron Cross.

Available in limited quantities during 2009 only, the ESP James Hetfield Signature Iron Cross is currently featured on Metallica’s 2009 Death Magnetic world tour. Painstaking effort has gone into recreating every nuance and gradation of James’ original ‘73 Gibson Iron Cross, while adding some new characteristics to make it a true unique signature ESP.

The guitar is based on the ESP Eclipse and Truckster models. James relies on this guitar heavily on Metallica’s Death Magnetic Tour.

The ESP Iron Cross has a street price of $9,999
For more information, visit ESP’s official website at www.espguitars.com

When Kirk Hammett, the lead guitarist of Metallica, was asked about his gear and tone for their new Death Magnetic album, this is what he had to say. “I’ve added more midrange to my over […]

Its status in the six-string universe is legendary, but Gibson guitar corporation has never made a real impact in the bass-guitar market. Since the Sixties, Gibson has developed and marketed basses that, for one reason […]

Houses, railroads, toothpicks, popsicle sticks, telephone poles, books, bookshelves, magazines and guitars—what do they have in common? You guessed it, boys and girls: they’re all made of wood and wood-based products. Which, as it turns […]