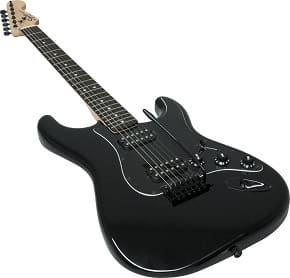 Many guitar players tend to make a certain face when they hear the word “Squier”. It’s the same face you make when someone says “telemarketing job” or “infomercials”. Forever destined to be the Yugo of the music world, the good folks overseas who make Squier guitars for Fender have pushed out a new model that is already changing the minds of those who put their hands on it: The new Squier Bullet Strat HH.

The Bullet HH designation indicates that, yes, this Strat is loaded with a pair of humbucker pickups. This is not the first guitar to meld together the North and South Poles of guitars – but it is without a doubt the most affordable. The Squier Bullet give you the feel that you love from a Fender with the pure rock sound that you crave from a high-end Gibson. Those are always stretched comparisons, as imported “beginner” guitars are of course nothing like the “real thing”, but you get the idea.

With the tremolo that can be set up with with three or four springs, this Bullet really comes off as an intriguing axe. The body is made of basswood, like Mexico Strats and Teles, only it’s thinner and lighter. The black paint job, with black hardware and whammy bar, plus the white-edged black pickguard make it a sleek and attractive instrument – even the pickups are black-taped. All that black really makes the pale maple skunk-striped neck and headstock stand out, like a rail of ice floating on the surface of a dark lake.

Plenty of happy buyers went into the deal thinking they might swap out the pickups for something hotter, or modify the Bullet in some other way, but most of them leave the guitar “as-is” when they realize that it just doesn’t have a bad sound in it. The 21-fret neck (with rosewood fretboard and medium-jumbo frets), similar to that which is found on the Squier Affinity, leaves a thing or three to be desired, but let’s take the Bullet for what it really is.

For a ridiculously stupid low price of $119, this black-beauty Bullet comes out of the box ready to play, although some players always like to fiddle with the action or file on the fret edges a little before they consider the guitar to be ready. The tuners (Kluson style) can feel a little stiff at first, too, but either lubricant or patience will settle that matter. Whether you leave it stock or go through the trouble of modifying the guitar, the Squier Bullet Strat HH will go more than a few miles in helping to reform the Squier image, even among “serious” musicians.

Beginners and veterans alike will love this Squier Bullet because it produces sounds that standard Strat setups (SSS or SSH) just can’t match, and because of the seriously low price tag. As a backup axe, or a practice workhorse, the Bullet will not find many dissatisfied customers. Considering that a Fender Telecaster with the double-humbucker configuration costs about $700 more (never mind what they’re asking for the 2004 Tele Deluxe reissue), you’re getting a lot of screeching and squealing for the money.

Harmony-Central–1963 Fender Spring Reverb Returns as a Modern Stompbox BOSS and Fender USA have collaborated to create the FRV-1, a stunning recreation of the 1963 Fender Reverb. A staple sound of rockabilly, country, blues, surf […]