I’m a little late to the party, but thought this was something worth posting. I thought it was a classy move by both Fender and Gibson guitars. Below are the press releases and images of the 9/11 tribute guitars.

The three September 11 tribute custom Stratocaster guitars gives reverence to the three major organizations that first came to help the people trapped inside the World Trade Center despite knowing the risks.

Fender pays tribute to these three heroic organizations: New York Fire Department, New York City Police Department and the Port Authority of New York and New Jersey, for the terrible price that they had to pay to help save lives on that tragic day.

These guitars were born from the idea of Tommy Clarke, a New York firefighter who, after spending time as a rescuer himself, collected 9/11 related medals, pins, badges and other commendations. Being a friend of Eric Clapton, the idea was brought to Fender’s office and was promptly put into work. Tommy Clarke’s collections are the commendation paraphernalia that Fender used on the three custom guitars.

Each of the three guitars has custom made art finish providing imagery related to each of the organizations and to the events of that day. Designed into the finish of each custom-built Stratocaster are a number of commendation badges and pins which depicts the events of 9 11. One particularly noteworthy badge that each of the guitar has inlaid is a badge that notes the number of fallen officers, paramedics, and firefighters: 37 for the Port Authority of New York and New Jersey, 23 for the New York City Police Department, and 343 for the New York City Fire Department.

Fender will be displaying the three guitars at an event in California around mid September. Then Eric Clapton will be using the 9/11 tribute Strats on the fall dates of his 2011 world tour. After that, they will be donated to the specific agency that they were designed for.

The three 9/11 anniversary guitars are Les Paul Traditionals with a gloss and ebony finish. What made them special are the unique lazer etched art embedded on the guitar body itself. These line drawings are carefully embedded to make sure that it stays as a part of the guitar, and not just the finish.

The first 9/11 anniversary Gibson design is called “Never Forget“, showing the Twin Towers when it was still part of New York’s skyline. The second design is called “Always Honor“, which pays tribute to the first responders, the heroes who some even gave up their lives in trying to save others. And lastly, the third design is labeled as “Forever Free“, where it shows the Freedom Tower joining the future skyline of New York City.

These guitars will be used for one year by various artists, traveling across the United States for all to see. The guitars will then be auctioned off on 9/11/12, for the benefit of the families of the 9/11 first responders. 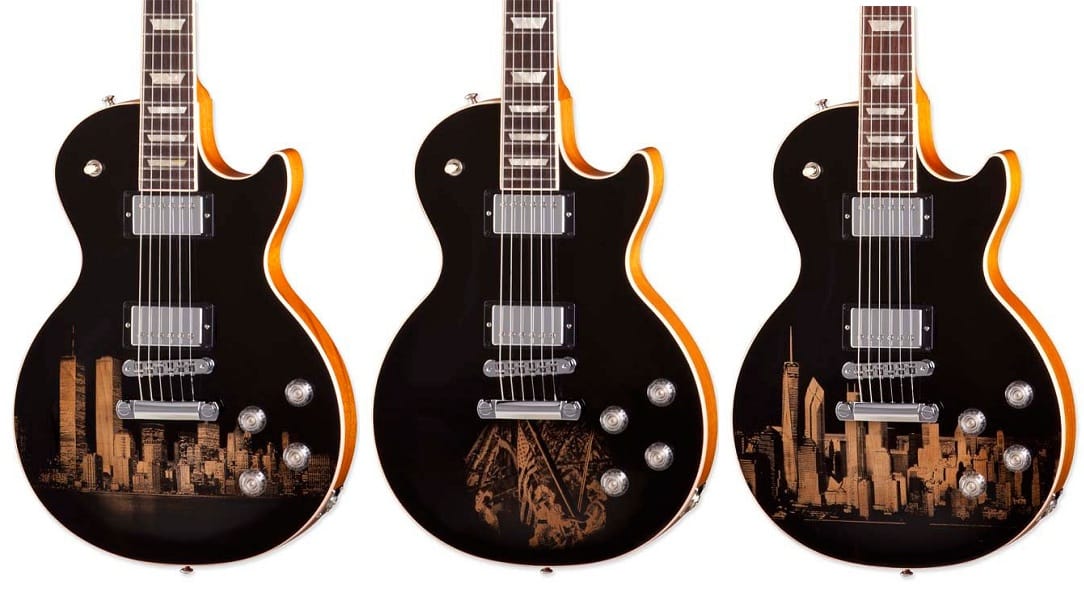 The 20th century will be remembered as an age of technology. And the electric guitar has been one of the most benign technologies to emerge from our troubled outgoing century. Like the innovations of Thomas […]