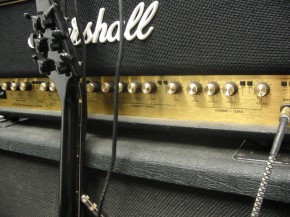 Marshall is one of the most reputed guitar amplifier manufacturers in the world. The history of Marshall Amplifiers is a really interesting one and the company with its excellent products has indeed rewritten the way a genre of music is heard! Many guitarists to date prefer the signature Marshall “crunch sound” which only Marshal amps can deliver. The company throughout its history has indeed developed many models which have been extremely well received by both veteran and entry level players and it continues to do so till date.

Marshall is based in Bletchley, Milton Keynes and has been manufacturing guitar amps since 1960. Although initially, its guitar amps were copies of Fender amps, they were quickly modified to produce a heavier crunch distortion sound which has remained a favorite for nearly a half a century now. In order to keep the sound quality intact, even today, many of the high quality Marshal amps along with some of its reissued models continue to use vacuum tubes as the primary amplification component. This is in stark contrast to the diode based amps which have also become popular primarily due to their lower pricing.

During 1965, Marshall Amplifiers entered into a 15 year contract with Rose-Morris which provided him with the funds to expand his product lines. He also began sourcing parts from UK instead of America to lower the cost of production; primarily transformers made by Dagnall and Drake and the KT66 valve made by Marcomi Osram. This made Marshall amps produce a more aggressive tone which found favor amongst younger players such as Eric Clapton, Pete Townshend and John Entwhistle.

By the 1970’s Marshal had begun to produce the Master Volume amp (MV) which was initially called the JMP. The added Master Volume allowed for even more distortion whilst keeping volume levels manageable. The “new voice” was immediately noticed and well received by such players as Zakk Wylde, Slash and Randy Rhoads. In 1980 the deal that Marshall had with Rose-Morris ended, which led to the renaming of the JMP to the JCM-800. This was the product of both Marshall’s name and the number plate on his car. Many new amps were produced under this brand name, most famous were the 100 watt 2203 and the 50 watt 2204.

By mid 1980’s Marshall began to witness more competition from American companies such as Soldano and Mesa Boogie and as a result began to offer more features with its JCM-800 amplifier. Chief among these was the “channel switching” feature whereby the player could juggle between clean and distorted sound with the aid of a foot operated switch. At this time Marshall also began experimenting with solid state diodes as a replacement for valves for distortion. As these were technologically more advanced than valves, the sound they produced was more crisp and clear than their older brethren. However, most amps coming out with solid state diodes were considered entry level equipment. With this new series of amps, Marshall successfully managed to penetrate the entry level market.

In 1990, Marshall came out with the JCM-900 which retained popular elements of the JCM-800 while offering even more distortion than ever. This new series was very well received by players belonging to the Pop and Rock genre.

Currently, Marshall has many lines of amps which are being sold to different market segments. Its Modern Series of amps consist of the JCM-2000 range which is basically a continuation of the 800 and 900 series without the diode clipping which they had.

Its Vintage Series basically consists of reissues, primarily the 1959 SLP, the 100 watt JCM-800 2203, the JCM-900 4100 and the JTM-45 2245. Other popular series include the Solid State amps and the Bass amps all of which have been very successful with their respective genre.

Marshall is to guitar amps what Fender is to guitars. The legacy that the company has left has few rivals and it has indeed defined the very music of the era in which it came out. The history of Marshall Amplifiers has had a greater impact on Rock music than some would give credit to it for. However Marshall greatly deserves its place in history for its incredible contribution to music as it is today. Use this link to find Marshall Amplifiers at a very low price. Read the history of the Marshall JCM-800 for even more information!

As many know, Jackson Guitars started when the heavy metal wave was on its peak. Grover Jackson first in-scripted his name on a guitar that was designed by the late Randy Rhoads in 1980, when […]