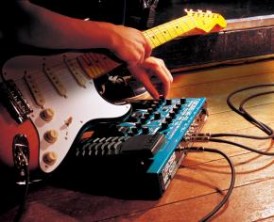 I’m 15 years old and have been playing guitar for about three years. Recently, I’ve become obsessed with the vas array of effects on the market. I currently own a DOD flanger and a Vox distortion booster, but I’m hell-bent on getting a wah, delay, octave, phaser and a million others. My dilemma is that I don’t know whether to get a truckload of pedals or a single multi-effects processor.

I am willing to spend more money to purchase individual pedals, but I don’t want to if I can get the same sounds from a single unit. I was hoping that you could tell me the advantages and disadvantages of each, and if there’s a multi-effects of each, processor you would recommend. Thanks

Good question, Shane. You would think a flanger’s a flanger whether it’s in a stand-alone box or one of several effects in a mutli-effects processor, right? Wrong! I can’t tell you exactly why this is, but to my ears stand-alone effects pedals always seem to have a purer, more realistic tonal quality than multi-effects units. And bet your ass the guys who make multi-effects boxes put plenty of research into making their all-in-one jobs more believable-sounding. Pedals probably sound better because their electronic circuits can be optimized to produce one sound, as opposed to a circuit in a multi-effects unit that has to produce many different effects and tones.

Recently, I reviewed the BOSS GT10 multi-effects processor, and was rather impressed by the quality of the sounds and the lack of “synthetic-ness” it possessed. Multi-effects boxes can be very useful in certain situations. For example, in a home studio it’s great to have a large variety of sounds to draw from and the ability to go direct so you don’t wake up the neighbors. As you pointed out, multi-effects processors are more economical in terms of how much you get for your money. Good sound, however, should always be a priority; worry about the quality of the effects, not just the quantity. All things considered, I’d take my time, build slowly, spend the extra dough and go for the pedals. Unless, of course, you’re loaded, in which case you should just buy everything.

Compared to some sexy new guitar or an amp powerful enough to frighten small children, many would consider a pedal power supply a yawner. But those of us who have spent years in the trenches […]

It may seem quite the stretch to lump bass fishing, guitars and eBay all into one simple concept, but it can be done with some patience and plenty of hydration. Anyone who understands the predator-fish […]

If you are looking for a second hand electric bass guitar that has killer vintage looks and bold shapes, then you might want to stop looking at the classifieds and consider getting the revamped Ibanez […]