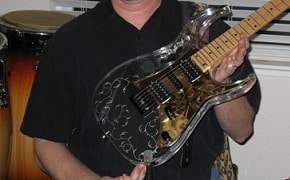 Before the Internet brought us the ability to window-shop on a global basis from the comfort of our homes, most people would have only had an occasional opportunity to see (much less play) an acrylic-body electric guitar. You’d find them once in a great while hanging on a pawn shop wall, or you’d see one being played onstage at a show, and that was about it.

Market-wise, this was clearly a yin-and-yang situation; guitar makers had very little incentive to produce them, because nobody was beating down their doors looking for them, because nobody knew they existed. Keith Richards of the Rolling Stones had a brief fling with a clear acrylic guitar in the late ‘60s, but other than the thousand-dollar-range Dan Armstrong models (made by Ampeg), acrylic guitars – some people call them “lucite” or “plexiglas” – just weren’t something you could run out and pick up as an impulse purchase.

Amazon, e-Bay and others quickly changed all of that. Not only has the selection of acrylic-body electric guitars widened, the competition has brought the price down across the board, with cheap imports available for as little as a hundred dollars. Acrylic can be left clear, can be tinted, or have design elements (such as glitter) incorporated into the material. Any way you choose, there are certain cosmetic aspects to acrylic guitars that make them quite attractive up on stage.

For starters, they remain a novelty, something for the peeps to gawk at while your band chunks out the music. In a dark bar, the stage lights reflect off the surface as if it were a mirror. In the light, the body is see-through, with the wiring and the “guts” visible to the naked eye even if it’s tinted… So it’s obvious that they look great in a live setting, but everyone knows there’s a lot more to guitar beauty than meets the eye. How does the acrylic-body electric guitar play and sound? 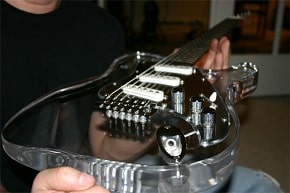 Much of that argument is subjective. The fact of the matter is that acrylic is heavier than wood and it resonates differently. It produces neither a light nor a heavy tone, which also lends itself to stage shows, able to play a variety of covers without pigeon-holing the player (who, if he or she wants to be pigeon-holed, already has a favorite guitar for that).

One of the better aspects of acrylic, too, is its versatility as a medium. Pretty much any guitar shape can be created, from the LP to the SG with Strats and Teles in between, and bass guitars as well. And those different body styles obviously appeal to different players and different kinds of music. Phrases like “tonal separation” are used by those who wish to sell these instruments, but it boils down to a matter of taste.

There are a number of makers out there today, such as Galveston and Wesley (the latter is a British company), who put out acrylic-body guitars for around $300 to $400. Even B.C. Rich is using acrylics as part of their Renaissance – and what looks better than a blood-red clear acrylic Warlock? Most people who buy one are interested in modifying the guitar, and some of the less expensive models all but cry out for hotter pickups and upgraded tuning machines. That makes sense with so many players wanting an acrylic number for their stage performances; they have to do more than look good sitting on a stand in the proverbial on-deck circle.

If you are looking to round out your collection with a truly unique guitar, and you want to go with a clear acrylic, keep one thing in consideration – and learn from the mistakes of someone who has owned one. Mine was a cobalt-blue Flying V (made in China by a company that went by the name of “Grand”) that looked purple against the light. Beautiful guitar, even had decent pickups, although the tuners were pretty lousy. It was heavy, which some musicians won’t mind, and the sound did seem like it was a bit confined in its postmodern shell. Above all else, it had one fatal flaw, which I discovered in all my ignorance.

Because the body was so heavy, and seemed so sturdy, I convinced myself that it would be okay with a set of Ernie Ball Twelves on it. And it did sound great that way… The problem was that I neglected to loosen the strings, and after a couple of months with those telephone lines pulling at it, the acrylic Flying V body had bent itself into the convex shape of a meat fork. I set it up as best I could and sold it immediately. Acrylic is, after all, plastic on a good day. Plastic is, in the end, a flexible commodity that remains (all its life) in a state of flux.

The payoff comes when other people see your venture into the land of the Plastic Fantastic, when the “ooh” and “aah” factors kick in, which is certainly gratifying to any guitar owner. For the money you’ll spend, clear acrylic guitars are a worthwhile investment, even if it is only made in the context of a passing fancy.