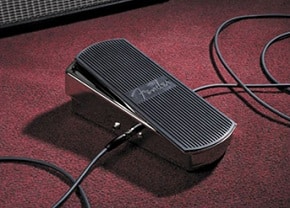 During the late Sixties and early Seventies, it seems like everything related to music was literally huge: amp stacks, stack heel platform shoes, rock star mustaches and hairstyles, crotch padding and, especially, effect pedals. Stomp boxes were the size of shoe boxes, and the average pedal board was so big that it took two roadies to haul one from the back of a Chevy van to the stage of the Cow Palace or Winter land. Of course, that all changed later in the decade as microchips replaced the transistors and cherry bomb-sized components in primitive effect circuits, and soon after, the size of the average pedal shrunk significantly.

Fender’s latest Classic Series pedal reissues bring back in their full glory four of the company’s big-honkin’ stomp boxes from the Golden Era of effects: the sensibly named Volume, Volume-Tone, Fuzz-Wah and Phaser. All four perfectly duplicate the vibe of the originals while adding modern conveniences that today’s players will appreciate. Using these pedals may make you feel like you’re wearing bellbottom flares and Ace Frehley’s moon boots, but these beefy behemoths offer plenty of functional advantages and sound that’s as big as Sib Hashian’s afro.

The Fender Volume, Volume-Tone and Fuzz-Wah all look like the gas pedal for a ‘56 Buick, and they’re plated with enough chrome to cover that car’s bumper. The Phaser boasts more modern Seventies-era styling with a textured black finish, raised silver “treads” and an oversized rotary knob that’s the size of a Scooter Pie. In addition to the usual up/down tilting movement, the foot treadles for the Volume-Tone and Fuzz-Wah features a groovy pivoting side-to-side action for controlling tone or fuzz intensity, respectively. Switches for the Fuzz-Wah’s fuzz and wah effects are mounted on either side of the pedal’s foot treadle, so you don’t need to worry about accidentally switching off your wah when you get emotional and bear down too hard on the pedal like you do with most other wahs.

Modern additions to these pedals include a separate tuner output jack on the Volume and Volume-Tone pedals, illuminated rate knob backlighting on the Phaser that pulses alternating blue and red patterns in synch with the effect’s rate, and nine-volt AC adapter jacks on the Phaser and Fuzz-Wah. Whereas the original Fender Phaser pedal offered only the oversized rotary rate control and an internal-mounted intensity control, the new version has recessed intensity and frequency controls mounted on either side of the pedal. The new version of the Fuzz Wah adds a bottom-mounted switch for changing the order of the fuzz and wah effects in the signal chain (fuzz before or after wah) and an internal trim pot for adjusting the overall volume of the fuzz effect to match levels or produce a fuzz-boost effect

The Classic Series Volume pedal simply does what a good volume pedal should. It has a nice smooth action, a generous amount of up/down travel that makes it easy to pinpoint ideal levels, and it’s built like a Cold War era bomb shelter. The Volume-Tone pedal adds a side-to-side tone control that offers more versatility for only few bucks more. Most guitarists will probably use the tone control in a “set it, then forget it” configuration. Fortunately, the sliding action provides enough resistance to hold the tone setting firmly in place.

The Phaser delivers mellow, natural-sounding phase-shifting effects without the obnoxious nasal overtones produced by many vintage phase shifters. The Frequency control is a great addition, allowing you to dial in the optimum frequency emphasis to match humbuckers or single-coil pickups or even a bass. The large rotary rate knob makes it easy to go from slow, subtle sweeps to jittery Uni-Vibe-style effects while you tone your calf muscles.

Although many vintage fuzz tones sound good only when applied to single notes, the Fuzz-Wah’s fuzz delivers well-defined, distorted chords while still generating the cut and buzz that makes fuzz so much fun. The ability to alter the fuzz’s intensity while you play is a surprisingly expressive and useful feature. Like the Phaser, the wah effect is smooth, detailed and natural sounding—more like the front of a vocal cavity than the barfy throat-gag midrange found on some wahs. Best of all, the Fuzz and Wah effects operate independently, making the Fuzz-Wah two pedals in one.

You don’t need to be in a Frank Marino tribute band to appreciate the humongous size and tone of Fender’s Classic Series effect pedals. This is one case where throwback styling makes sense in the modern era as the oversized housings allow players to gain back detailed control they lost when pedals shrunk in size. Thanks to Guitar World for the report!

Ten years ago you could have filled a closet with all the gear required to do what Korg’s palm size Pandora PX3 Personal Multi Effect Processor does. Part effects unit, part beat box, part personal […]