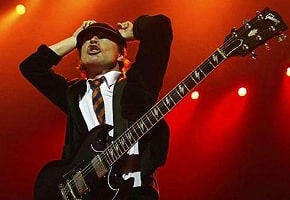 The topic of Angus Young, who is, of course, the lead guitarist in everlasting rock gobstopper AC/DC, comes up frequently in guitar circles, both with students and with peers. There are a lot of folks out there who aren’t sure if Angus is really any good and wonder if he might be a bit overrated as a guitar player, mostly due to the simple and straight ahead music his band plays.

AC/DC has written and continues to write the proverbial book on what it means to be a rock and roll band. They are stripped down, no frills, loud and proud rock and roll, the kind that appeals to the primitive lurking in all of us. This is sometimes, however, seen as simplistic by certain folks who want to compare Angus & Co. with more note-heavy guitarists like Van Halen, Vai, Satriani, and such. This kind of seemingly apples-and-oranges comparison shows that these people are missing the point, entirely. Angus plays a style deeply rooted in the blues, where phrasing and vibe are what really matters, and not sheer speed for the sake of speed. Wonder why his solos make such great air guitar fodder? It’s because he speaks in plain but complete musical sentences.

Think about it: I bet you could sing at least one Young solo right now. Angus is a master of this kind of guitar playing and this approach has let him milk more music out of the pentatonic scale than perhaps any guitar player in history. Couple this with the most solid rhythm section from the classic rock era, and it is no wonder how the band has managed to stay afloat and popular all this time.

The more shred-oriented guitar players out there tend to appeal mostly to other similar musicians, who can grasp the complexities of this kind of playing because they play the guitar, themselves. Angus and AC/DC are all about the man in the street, the guy down the block, you and your friends; this does not make them simpletons or musical morons. It just makes them the type of players who are all about feel and vibe in the truest sense, trying to get to the point of it without a lot of ornamentation getting in the way of what they are trying to say. If anything, Angus is underrated. He is much better than he gets credit for. The takeaway from learning his stuff is that phrasing and style trump speed and busy-ness and that, when you want to connect with people, speak straight to them, not over their heads.

One of the hottest topics of discussion in musical circles these days is the idea of music licensing, copyrights, and musicians getting paid for their work. It is usually part of the covers vs. originals […]

Who Inspired You to Learn to Play Guitar?

No matter what anyone says, every musician pulls influence and is inspired by at least another musician(s) in his or her lifetime. For me, my list of artists spans a few different genres, and I […]