KIRK HAMMETT characteristically relies on a rock star—sized rack of amplifiers, preamps and custom-tweaked processors to generate his volcanic live sound. In the studio, this rack becomes a part of an even larger equation, where Hammett meticulously augments and shapes his iconic tones with a menagerie of specialized and vintage gear. If you haven’t guessed it, Guitar World’s first Hall of Fame inductee is an incurable tone hound that has lacked only one thing: an amplifier singularly capable of creating his current trademark tones and versatile enough to grow with Hammett’s changing tastes and needs.

Randall Amplification teamed with Hammett to devise this metalhead’s daydream amplifier after Anthrax’s Scott Ian raved to Hammett about his and Dimebag Darrell’s positive experiences with Randall amps. It just so happens that Randall’s MTS (Modular Tube System) amplifiers are perhaps the ideal platform for Hammett’s amp because they are famous for their high-end sound quality and allow for practically limitless expansion. Amp whiz Bruce Egnater pioneered this cleverly practical system where the preamp consists of removable tube-driven modules, each designed to achieve a specific tonal goal. Kirk’s Hammett’s signature series Randall MTS amplifier comes loaded with the three modules that he and Randall’s engineers crafted over an extensive research and development collaboration.

The power section of the Hammett’s Randall uses four 6L6GC tubes to produce 100 watts of thumping power. Each of the power tubes has its own test point, bias adjustment, fuse and tube failure indicator light. Ample transformers throttle the amp’s output, and a vertical fan simultaneously blows cool air around the tubes and across the circuit boards. Two 12AX7 preamp tubes are dedicated to the amazing- sounding series and parallel effect loops, while a third 12AX7 drives the preamp input stage for all three channels. Global knobs on the front panel control master output, density (low-end depth), presence and the mix level for any effects in the parallel loop.

The modular preamp section has three channels, which means that there are three ports that will accept any of Randall’s many MTS preamp modules. Of course, the amp ships with the three preamp modules that Randall developed from their measurements of Hammett’s gear and with a lot of input from Hammett himself. Each preamp module features two 12AX7 preamp tubes and controls for gain, bass, middle, treble, volume, and bright boost. As a nice personal touch, Hammett’s own handwriting labels the controls on the modules and all front panel features.

Module RH-1 is intended to deliver Hammett’s unique clean tones, which sound a lot like the woody warmth of a Fender Deluxe mixed with the satiny midrange of a Roland JC120. KH-2 is aimed right at delivering Hammett’s thick and punchy Recto-based rhythm and lead tones. The third module, KH-3, is primarily dedicated to higher-gain lead sounds. It’s important to remember that these modules are not copying the tones of any single amplifier. Rather, they are encapsulating the complicated sound that results from many pieces of Hammett’s personal gear.

On the back, the amp features seven-pin MIDI In and Thru jacks, two speaker outputs, the aforementioned effect loops, a slave output and an impedance switch with four-, eight- and 16-ohm settings. The supplied three-button programmable footpedal connects to the MIDI-in jack and also features a nine-volt output for powering other pedals. Randall’s matching 4×12 cab is loaded with a pair of Celestion Vintage 30s and a pair of Celestion G12T-75s, which allows Hammett to get plenty of midrange kick and sizzling presence out of one cabinet Besides the cab’s stereo inputs, there’s also a built-in “mic eliminator” direct box that consists of two XLR outputs, a ground lift and dedicated bright, normal and dark settings.

Hammett’s RH-1 module constructs Hammett’s most elusive clean tones, which are characterized by a soft lower midrange, strong high mids, and round, defined bass. This combination of qualities makes it quite easy to nail Hammett’s tone on “One,” from …And Justice for All, and the “Black Album” track “Nothing Else Matters.” It’s a disarmingly sympathetic voice with the same foreboding charm that Boris Karloff used to mesmerize his victims in classic horror films. 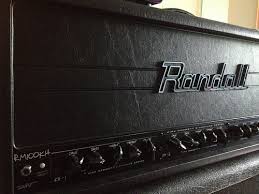 The KH-2 module produced thick crunch tones, which I easily dialed into a “Sanitarium”-style rhythm focus or the massive and wide crunch that Hammett used on Garage Inc.’s “Sabbra Cadabra” cover. Most of this range is thanks to highly responsive midrange controls. Per Hammett’s request, they are more like depth controls, where even extreme midrange response curves don’t disturb the amp’s feel. On low settings, the midrange sounds like it’s firing from a distance. Cranked high, it becomes a crunch cannon that will blow your head off.

Hammett’s third module builds on the KH-2’s heavy low-end punch, adding mids, gain and a British-style leading edge. The incredible definition is maintained at the expense of long sustain. But since Hammett is known for goosing his amps with a Tube Screamer overdrive, I used the same method to make over-the-top leads possible. Randall should also be commended for the amp’s effect loops. Far from an afterthought, these loops maintain amazing signal integrity and strength.

Randall has actually managed to accurately capture the tone and feel of Kirk Hammett’s most instantly recognizable clean and heavy tones in the new RM100KH MTS signature series amplifier and matching RS412KHX cabinet. So, it goes without saying that this amp is a must-have for any hardcore Metallica fan who wants to experience the closest thing to visiting Hammett’s studio. Best of all, this amp isn’t limited to these incredible Metallica tones. The three modular preamps can be swapped out in seconds for any of Randall’s other standard or artist series MTS modules. Thanks to Randall Amplifiers for the report! 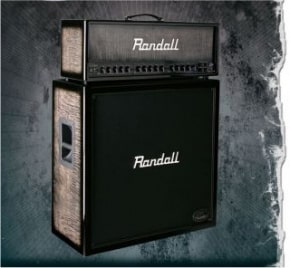 Randall knew what they were doing when they decided to collaborate with the guitarist from Metallica, Kirk Hammett to create the RM100KH Limited Edition Half Stack. Hammett is known for his legendary guitar work, leads and the sounds he is capable of manipulating, the hype surrounding the new series of MTS amplifiers. Hammett helped design and perfected the RM100KH.

In the past, Hammett required several amps to create the tone he was always after. Hammett used various models of amplifiers, like the Marshall JCM800, Mesa Boogie Mark IIC+, Mesa Boogie Dual Recto, Fender Twin and the Roland JC-120. That is why the Randall RM100KH amp and cabinet from Randall are so coveted. The cabinets are capable of creating the volume sweep that so many players, including the tones that Hammett himself chases.

Each MTS Module is loaded with two 12AX7 preamp tubes. The KH1, KH2, and KH3 play a huge role in making Hammett‘s signature model head sound so amazing. Allowing you to control the gain / volume mix from each MTS preamp to get that “Enter Sandman“ — “Master of Puppets“ to “Unforgiven” true blood Metallica tone.

Though you can easily replace the power tubes with a user-friendly power-tube bias, that doesn’t necessarily mean that you are giving up any of the power or control of a full blown valve amp, rather, what you’ll notice is a perfectly loud Metallica tone that is easy to EQ and shape to your own sound.

The RM100KH 4×12 cabinets were created with much thought put into each tone, getting a full range of tone has never been easier. Beautiful solid maple cabinetry, (maple wood enhances the sound) chrome hardware, and a custom paint job this amp will rock your world! With the three-channel amplifier head, it is possible to run your amp volume high as you increase to the high-gain tones and then carry that over as you drop-tune your guitar without losing any definition or tube drive from the valves. You can get that from other amplifiers, just not as easy as the Randall MTS. 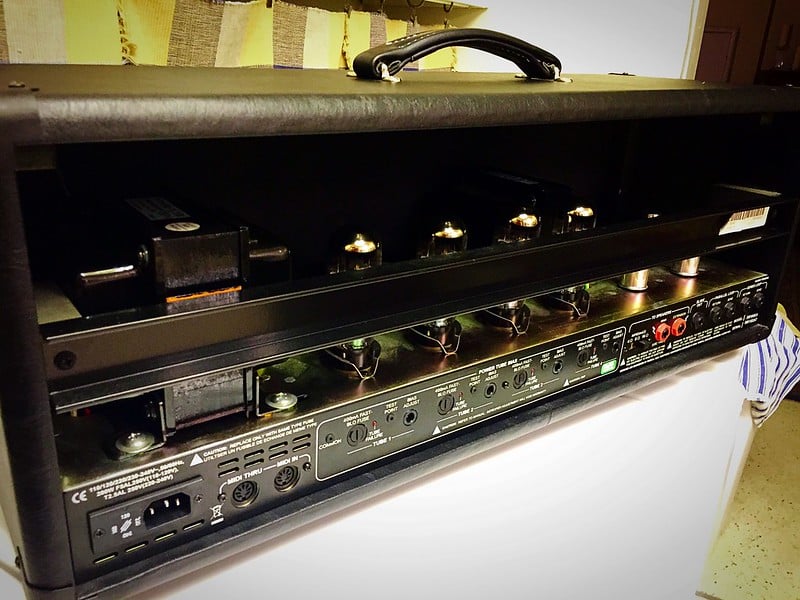 Randall made the best choice in packing 100-watts into these versatile amps, At full volume, they create ear bleeding noise—unless of course you really don’t want that for studio recording purposes. The power section of the amp holds four high-quality 6L6GC tubes which deliver those distorted power blends and tube-sag as mentioned earlier. Chosen for their power output, the tubes deliver a more even tone on the low-end but are overall a versatile choice.

In addition to all the features that already make this series a signature line, there are a few more selling points to sway your opinion. The KH1, KH2 and the KH3 have two effects loops, both parallel and series. Experimenting with your signal can be fun, and sometimes brings about the creation of some really awesome sound, but for the most part, there is a lot of learning involved. With the addition of both effects loops, you take out a lot of the guesswork without giving up the quality of your sound and still gaining a lot of control. At the same time, there is still the opportunity to experiment with your amp, through the signals and the effects.

All this comes wrapped up in a beautiful cabinet that might just be too nice for the abuse the amps are bound to go through. Most amps today can’t even come close to everything Randall and Hammett cooked up, they really do not leave much to be desired. All you need now is time to perfect your own signature guitar riffs and try them out onstage. But a pricey one at a couple of grand.

Randall Amplifiers Future – Are They in Trouble?

Mesa/Boogie–No other company can make guitars amplified as divinely as Mesa Boogie can. This manufacturer of high quality and top of the line amplifiers is based in Petaluma, California, and has been going at it […]

It wasn’t long ago when we first tested the Mesa TransAtlantic TA-15, well now bigger brother, the TA30, is here.  It’s called TransAtlantic because it spans classic British and US tones, specifically Vox-inspired when it […]