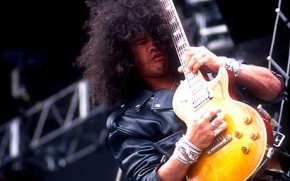 Somewhere deep in the primordial ooze of rock and roll there exists a phenomenon known as the “riff,” with the power to make a decent song great, and a great song an all-time classic. There were a handful of great riffs in the ’50s (“Susie Q” comes to mind), but the form really began to flourish in the ’60s, at the hands of Dave Davies, Pete Townshend, Keith Richards and other, predominantly British, guitar heroes. In the ’70s, it was part and parcel with “classic” rock. You couldn’t throw a pet rock without hitting some axeman coming up with his own “Iron Man” or “Sweet Home Alabama.” The ’80s kept the tradition running, with guitarists from decades past, like Keith Richards and Tony Iommi, still flexing their muscles, along with a new breed of riffmasters like Slash and Vivian Campbell.

It’s tough narrowing down the decade of Reagan and Rubik’s Cubes – and when all-stars like Eddie Van Halen, Tony Iommi and the boys from Iron Maiden don’t make the cut, you know you’ve got a tough list – but here are the 10 we deem the most totally awesome of the 1980s.

You’ve got to love Alex Lifeson. Blessed (or cursed) with sharing trio space with one of the best bass players on the planet and probably the best drummer on Earth, Lifeson still manages to stand out with imaginative solos and, in the case of this Moving Pictures tour de force, major league riffage – his best since “Passage to Bangkok.” [Rush, “Limelight” guitar tab]

Appetite for Destruction ushered in a new age of stripped down, rip-out-your-throat rock and roll. And while the album was stacked with heavy hitters like “Welcome To The Jungle” and “Mr. Brownstone,” it was the ballad of the set that had the most unique and memorable riff. Kudos to Slash, Izzy and company for finding a way to wrap a love song around this torturous hand exercise. [Guns N’ Roses, “Sweet Childo’ Mine”]

Sometimes you only need two chords to kick an audience in the teeth, and certainly Mick Jones and Joe Strummer did just that with this Combat Rock fave. Beginners, if you need a showpiece for that school talent show but only know a handful of chords (no pun intended), you could do a lot worse.
[The Clash, “Should I Stay or Should I Go” guitar tab]

Even metal dudes had to cop to the fact that this Michael Jackson track freakin’ rocked. Yes, it had that insane guitar solo by Eddie Van Halen, but the engine driving the song was a weighty bounce by session whiz Steve Lukather. [Michael Jackson, “Beat It” guitar tab]

Priest fans might argue that “Livin’ after Midnight” or “Heading Out To The Highway” are more deserving – fair play, I actually prefer “Highway” – but it’s hard to deny the brutal simplicity of this British Steel classic. Kinda makes you want to rob a bank with your guitar, doesn’t it?
[Judas Priest, “Breaking the Law” guitar tab]

There’s a bit of alchemy on this one, not unlike the opening chord of The Beatles’ “A Hard Day’s Night.” There are actually two guitar parts interwoven on this seemingly simple blast from Pyromania. It proved to be a memorable entrance for Phil Collen into the band, just as their career was about to kick into overdrive.
[Def Leppard, “Photograph” guitar tab]

Maybe the heaviest combination of simple power chords ever, Rudolf Schenker’s five-chord opening on this Love at First Sting track is instantly memorable – the key to any great riff. Case in point: I defy you to attend an air show and not hear this song 10 times! [Scorpions, “Rock You Like a Hurricane” guitar tab]

In the 1980s, you couldn’t throw a dead cat in a music store without hitting some kid playing this Randy Rhoads warhorse. The churning, sinister opening section hurls the song forward and creates a momentum that never lets up, even as Ozzy takes it off the rails. [Ozzy Osbourne, “Crazy Train” guitar tab]

Twelve years after “Honky Tonk Women,” Keith Richards could still conjure an open-tuned gem like no one else. This 1981 classic is so stirring that nearly 30 years later you’re still unlikely see a football stadium not use it to psych their fans up for a kickoff. [The Rolling Stones, “Start Me Up” guitar tab]

Perhaps the greatest riff-oriented album of all time is the band’s 1980 farewell to dearly departed singer Bon Scott. Brothers Angus and Malcolm Young cooked up some of the greatest riffs of their career on this magnum opus (including “You Shook Me All Night Long,” “Hell’s Bells” and “Have a Drink on Me”), but none is more memorable than the hard and heavy title track. [AC/DC, “Back in Black” guitar tab]

Anthrax’s legendary axe-man and founding member, Scott Ian, has been playing Jackson guitars most of his professional career. Why? Because Jacksons’ sound and play awesome and are the true definition of metal! Though Ian did […]

The Les Paul Studio Swirl is a stunning new addition to the popular Studio series, which has been bringing full-fledged Les Paul performance and tone to hard-working musicians since its introduction in 1983. These guitars […]

As Van Halen is such a mentored guitarist, it seems appropriate to review the third Edward Van Halen signature guitar (the second made by Peavey) a classic in the axe-mania public. For those readers unfamiliar […]