Metallica and Megadeth are both thrash metal pioneers who helped usher in the modern era of heavy metal and both bands have enjoyed great success and popularity amongst rock music fans the world over. The question before us today is simply which band is better, which is a subject sure to cause much controversy and discussion. Both bands are part of the Big Four (along with Anthrax and Slayer) that redefined metal music in the 1980’s and provided an alternative to the many hairspray-addicted bands that dominated the radio during that time. Both bands have maintained long careers and kept their identities and their fan bases through up and down periods and the inevitable lineup changes that most bands with such long histories must endure.

Knowing how emotional this subject could be to metal fans, we here at Gear Vault decided to look at statistics first and foremost to decide which band comes out on top. This is the record business we are talking about, ultimately, and selling records is the name of the game. Megadeth has been one of the most successful metal acts out there, selling over 20 million records since the band launched in 1983, which is a phenomenal amount of units to move. Metallica, which was formed in 1981, has sold an estimated 100 million records worldwide as of the release of Death Magnetic, their latest release. Their 1991 effort, Metallica, also called “The Black Album”, has sold 22 million copies on its own. In terms of pure sales, Metallica trounces Megedeth at the cash register.

Sales figures are only part of the equation, however, and must be looked at alongside the question of influence, which is often a better gauge of a bands’ greatness than just commercial success. Here, too, Metallica comes out on top. Megadeth founder Dave Mustaine was originally a member of Metallica until he was ejected from the group, which led him to start Megadeth. In other words, without Metallica there would be no Megadeth. This makes Metallica the ultimate progenitor, not only giving birth to its own legend but, in a not-so-roundabout way, to Megadeth’s as well. This combination of record sales and influence in the metal scene puts Metallica on top of Megedeth and gives much credence to calling the band the “Led Zeppelin of their generation”, as many fans and critics have done. Music is subjective, of course, and each band has those fans that will prefer it to the other, but the tale of the tape tells only one story: Metallica rules. 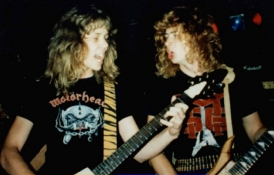