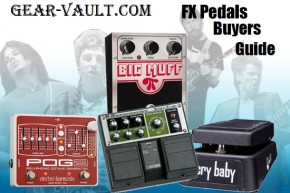 Effects are one of the coolest things that you can have your instrument do! Effects aka FX is essentially added on to the original sound of your equipment; this can be distortion, bass or even sci-fi modulations.

While learning how to play the effects can seem to be more secondary as compared to learning the instrument itself, getting an effects box (or stomp box as they are popularly known) can be a fun way for you to learn about the instrument’s range of tone, not to mention it can also help you get started. There are all sorts of effects that you can go in for. If you already have a tune in head then you can simply read through this article and see where it fits. One good way is to look for your favorite artist interviews online and see what kind of instruments they use to bring out their signature sounds.

Here are some of the more common and easily found effects that are doing the rounds:

These effects split the original signal into two and allow one to play in real time while momentarily holding back the other. These are again mixed back into one at the output. Delay effects include:

a. Reverb: This is a rather natural effect. Think how you sound when you are singing in the bathroom or when you are walking up a concrete enclosed staircase. It gives the effect of singing in a large hall. Reverb is used in almost every record being made today. If you are to buy a reverb pedal then you will be given a variety of presets to choose from.

b. Echo: Echo is a rather fun effect to play with. It is again pretty natural and is also called long delay. Echo control lets you control the level, the period between playbacks and also the decay, which is the rate at which the note gets quieter every time it repeats itself.

c. Looper: This is a very long delay; it gives you the option of eliminating decay and locking the sound into a continuous loop. You can then add other loops over them and then save them for usage later.

These involve “modulating” certain sound frequencies in a particular way while the others remain unaffected.  Common modulating effects are: 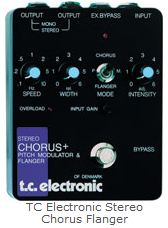 a. Chorus: Is the most common modulating effect. In application, it sounds like a single signal running through two different amp units with a slight delay between them. Chorus can be very well used to thicken u the sound of a rhythm, bass or solo guitar.

b. Flange: A Flange sounds the same as a tape when you have pressed a finger on it for a second and then let it go adding an additional dry signal which plays with the original. This adds a spacey feel to the music by thickening the sound.

c. Phase: Phase shifting manipulates the pitch of the music less dramatically than flanger although the sound it creates can resemble it. It does so by cyclically eliminating certain frequencies in the overall sound.

d. Rotary: The rotary sound is created by actually rotating the speaker on a vertical axis very rapidly. It creates an effect with a vintage vibe to it.

e. Vibrato: this is the subtle raising and lowering of the pitch of the note being played. This can be naturally produced by shaking your fret hand or even using the vibrato bar (or whammy bar) on the guitar. As this works best as an intermittent effect, it comes with a foot operated on and off switch.

f. Tremolo: Tremolo is simply the rapidly increasing or decreasing the volume. Many amp units have this effect built into them.

g. Ring modulation: adds strange overtones to otherwise normal melodies. Ring modulation works by multiplying the incoming guitar’s signal with another signal which is generated by an internal oscillator. Ring modulation is always mixed into other effects to get good sounds.

EQ Effects work by changing the quality of the sound itself rather than fiddling with the pitch. You can get high treble sounds like those produced by a cymbal to that of a bass drum with these. Commonly used EQ effects are: 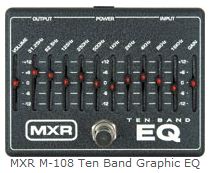 a. EQ: Quite simply, even the tone knob on your electric guitar is an equalization unit which will cut down on the treble when you want to produce more bass. Most amps also offer a three band EQ’s which are treble, bass and mid knobs which boost their respective frequencies when you turn them up. Graphic EQ’s can divide a frequency into narrow bands each of which can be manipulated with the aid of a slider.

b. Wah: Allows you to add a more treble to the sound that is nasal, mid-range and interesting in its own right. You can either stomp the Wah peddle quickly to get quick boosts in sound or compress it slowly to get a more elongated and smooth tone.

c. Auto-Wah: Lets you do what the Wah peddle does, without the peddle on complete automatic.

Distortion essentially thickens up or makes the signal more “meatier” than the original and has indeed become very synonymous with the electric guitar. The distortion effect was discovered accidentally when vacuum tubes within amps were turn on too loud. Although initially it was considered undesirable, guitarists came to appreciate that it also helped them produce a long sustain out of each note.

Although most distortion effects were originally produced on vacuum tubes as these created a warm, musical tones, now-a-days these effects are being reproduced with the aid of solid state circuitry or even digitally. Some amps however continue to use tubes.

a. Overdrive: Overdrive can be used to broaden and warm up the signal of a rhythm guitar. It can also be a good way to fatten up the notes without masking subtle hand techniques. An overdrive works much the same way as a distortion unit does but not quite as strongly.

b. Distortion: By far the most sought after sound these days, distortion pedals are by far the most common of all effects. You can get anything ranging from a warm, melodic tone to a harsh and jagged music from it. Generally speaking you can get a fair idea of what kind of distortion you can expect from a particular model, however if you really want to be sure then look up some reviews of the particular models that you want.

c. Fuzz: A fuzz pedal is simply an extreme distortion. It is used as a trimming rather than a staple music which is why it can be used in intros or solo guitar parts.

Pitch shift effects work by generating a note that is a specific pitch distance (or specified interval) above or below the note which is being played. Since a lot of control needs to be exercised while using this, these, usually come with a lot of control options.

a. Harmonize: This is the most basic Pitch shifting function and can be used to produce all sorts of vocal harmonies. Many modern harmonizing effects units allow you to input the key you are playing in along with the interval to the harmony notes thereby simplifying the setup.

b. Sub-octave: This is essentially a harmonizing effect which generates a note a full octave beneath the note you are playing.

c. Whammy: Much like the whammy bar from which it has derived its name, the whammy pedal can allow you to bend the pitch of the guitar sound up or down using a treadle.

There are a whole lot of other effects that can make subtle difference to the sound without really adding or morphing them that much. Common sound conditions include:

a. Gain: Gain simply refers to the amount of electricity carrying the sound. A standalone gain booster is essentially a preamp and can be used to overdrive the preamp section of your amp unit. Gain boxes are best used for solos.

b. Volume Pedal: Allows you to control the volume of your instrument with a foot treadle rather than hands. This allows for a more dynamic and versatile control over the music being played.

c. Compression: A compression works by compressing the output levels of your instrument, for example, it can make a loud signal quieter and a quiet signal louder.

d. Limiter: A limiter cuts the signal at the higher volume levels to prevent damage to your equipment.

e. Expander: Works the opposite of a compressor. It allows you to stretch the signal making the quieter tones quieter and the louder tones louder.

f. Noise Gate: This can do away with the hums and hisses that come out when your gear is plugged in, but not in use. It works by cutting out sound altogether below a certain level.

Most of the effects which have been described above were analog in nature however some like the pitch shift did not really catch on until it had been digitized. Most of the effects now doing the rounds in the market are digital. However this should not deter you for opting for them, the difference is virtually nil and can only be told by someone with near superhuman hearing!

This caught on in the 1990’s when companies began making digital effects which mimicked sounds generated by classical instruments and amp units. Before long these were being made for models of speakers and even microphones. Read more about the Digitech RP1000 Multi-Effects Processor.

These make accessing a certain type of effect easier in an effects unit. Presets come complete with several effects applied already from the factory so that you can start playing and experimenting asap. Most modern effects units have some really great presets so that you do not have to go through thick and thin to make your own. You can also make small changes to these existing presets and save them so that you can use them later.

A pedalboard allows you to organize stomp boxes and pedals into one convenient location so that you can avoid the wiry mess that results from having them all over the place. You can use them both for mounting your pedals and even for providing them with a simple powering scheme.

A microphone’s purpose is to capture sound. Depending on weather you are playing a live show or doing some work in the studio, the microphone can be your best friend; or your worst enemy. Choosing […]

It may seem quite the stretch to lump bass fishing, guitars and eBay all into one simple concept, but it can be done with some patience and plenty of hydration. Anyone who understands the predator-fish […]