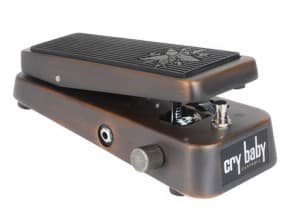 Wah-wah—it didn’t take long for every guitarist, producer, and soundtrack composer to realize that they needed that sound. The early days of way production, however, were fraught with inconsistent components and a fundamental misunderstanding of the rigors a pedal would go through in the rock and funk worlds. Wahs were hard to get and varied wildly from pedal to pedal, all of which caused the effects to fall out of favor with players and drove many manufacturers out of business.

Enter Jim Dunlop. He bought the Crybaby brand from Thomas Organ in 1981 and set about restoring the Crybaby to its rightful place in the music world. Along with engineer Sam McRae, Dunlop examined every component of the wah pedal and introduced consistency and durability to the design, while leaving the pedal’s magical expressivity intact. In their Benicia, California, headquarters, the members of Dunlop Manufacturing improved the jacks, pots, and overall construction of the Crybaby and within a few years delivered the GCB95, and instant classic in the wah world. Soon enough, the fears that wah pedals couldn’t withstand the abuse of world tours or four-sets-a-night bar gigs were a distant memory. Dunlop would go on to install as stock equipment switches that were rated at 1.5 million cycles and pots that were rated at 3 million cycles. Jim Dunlop summed it up in his succinct, understated style: “That’s a lot of cycles.”

But they didn’t stop there. Based on players’ requests for increased parameter control, they created the 535Q, a state-of-the-art wah pedal that allows musicians to select the center frequency, Q and boost level to further tailor the effect to their playing style. This allowed every guitarist to create their own personal version of what was already the most personal effect on the planet.

The results were immediate and undeniable. Guitar heros in every style gravitated to the Crybaby because of what it could add to their music. Bluesmen like Buddy Guy and Stevie Ray Vaughan; rockers such as Zakk Wylde, Slash, Kirk Hammett, and Jerry Cantrell; and session cats like Steve Lukather all used the same pedal to create totally different statements. There is no other pedal that can sound so dramatically different from player to player. What a guitarist does with a Crybaby is as unique as that player’s fingerprint.

Despite all these accolades and all this success, Dunlop still wasn’t done. The relentless pursuit of wah personality led to a microscopic examination of the very heart and soul of the effect: the inductor. The inductor is what shapes the tonal character of the wah. It’s the wah pedal’s voice, and inconsistencies in inductors led to the sometimes delightful, sometimes maddening variance in early wahs. Dunlop manufacturing was so intent on delivering a reliable wah that they took the unprecedented step of purchasing the Fasel and Jen inductor factories in Italy. These inductors, used in the very first wah pedals, represent the holy grail of wah tone and offers guitarists the ability to truly grab a piece of the tones that changed their lives.

It all adds up to a constant string of innovation that speak directly to player’s creativity and individuality. With the Crybaby line, Dunlop has stuck an amazing blend of respect for classic, traditional tone and an embrace of cutting edge improvements and refinements. They have truly gotten it down to a science, without ever losing the infinitely variable, expressive quality that defines the Crybaby. Despite today’s stricter, tighter tolerances, the Crybaby remains the world’s most creatively variable effect. The results speak for themselves, with 27 Crybaby models created over the years—15 currently in production—and the broadest and most impressive artist roster in the business. Decades after its introduction, it remains true: Players who want to know what they truly sound like choose Crybaby to express themselves.

History of the Vox AC30

The Vox AC30 is one of the longest-lasting and most popular guitar amplifiers ever produced. Its appeal is wide enough that it could be considered to be the Fender Twin of Europe and it has […]

PRS 25th Anniversary SE Custom 24 Guitar Review Paul Reed Smith has become established as one of the biggest guitar makers and most well-respected instruments out there today. US-made PRS guitars are among the best-build […]