When the word got out that we are reviewing Electro-Harmonix’s reissue of their Micro Synthesizer, reactions were decidedly mixed. Some exclaimed, “It’s about time they reissued it!” Others muttered quietly, “Yeah, I had one once, but I couldn’t tell if it was working right.” Love or confusion, indeed.

Perhaps some clarity will emerge by first clearing up the “synthesizer” misnomer. Unlike other guitar synthesizers, the Micro Synth is really a pedalboard’s worth of stomp boxes rolled into one, allowing your guitar (or whatever else you plug into it) to emulate the phat tones of vintage Seventies synth. Imagine feeding your guitar to three fuzzboxes, an automatic volume pedal, and an automatic wah, and you’ll begin to get the picture.

The Micro Synthesizer is housed in a sheet-metal enclosure measuring 8 x 6 x 2 inches. A trim pot on the back of the pedal sets the unit’s sensitivity to either single-coil or humbucker pickups, but all the important controls are in the form of sliders on the unit’s face. The controls are in two groups, voice and filter sweep, with a couple of sliders to control the note attack and entry of the filter characteristics. 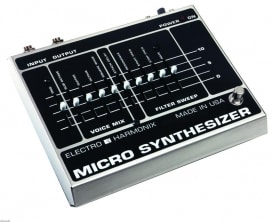 In brief, the voice section consists of three forms of distortion and a clean tone. The suboctave voice adds a tone one octave below the guitar’s pitch, sounding very much like the Boss Octave pedal. The guitar voice is a dry signal, somewhat colored by the Micro Synth’s preamp circuit, and the only voice that will tolerate chords without generating wickedly erratic distortion. The octave voice could go head to head with Roger Mayer’s Octavia pedal, and the square wave voice is a fuzz box tone of Sixties vintage, full of crackle and fizz. These four voices are processed in parallel, allowing you to mix their various idiosyncrasies as you please. Is that octave tone a little too bright? Mix a little suboctave in. Is the guitar voice in need of just a touch of background static? Tweak that square wave to taste.

Whatever odd little swarm of buzzes you raise in the voice portion can be shaped with the attack delay control. This functions like an automatic volume swell, sensing your pick attack and dropping the output accordingly. This allows you to emulate everything from subtle bowed effects to those backwards tape solos so overdone for about six months during 1969.

Micro Synth is a box of quirks.

To name just a few:

And yet, the variety of distortions (including deliberately overdriving the preamp) would please any connoisseur of Edge City tone. The filtering would sit well in a hip-hop or techno mix, and the background noise is just the kind of thing Beck would pump up in a scratch break. And for a couple of hundred bucks for a used one, it’s cheaper than the equivalent collection of individual stomp boxes.

Fractal Audio Axe Fx Overview The Axe-Fx is a breakthrough guitar amp simulator and studio effects processor. Unprecedented computing power is dedicated to driving its highly detailed algorithms that deliver the sound and feel of […]

Fans of George Harrison may well remember the guitar he was holding on the cover of his Cloud Nine record: a black ’57 Gretsch Duo Jet. When the Gretsch Company decided to honor the legendary […]