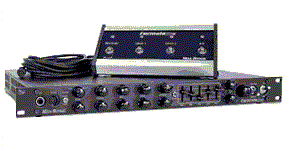 Recording engineers know that it’s never been easy to get good guitar tone by “going direct” into a mixer. Yet, for many guitarists with home studios, miking an amplifier to achieve a more natural-sounding live tone isn’t always an option. Maybe you don’t have the best sounding amp and cab setup; perhaps you do, but your home studio environment prevents you from cranking it up. Maybe you’re recording live in a small space and you don’t want your guitar sound to leak into the drums or vocal mikes. Obviously, there are any number of reasons to record directly—and there are number of devices to help you do it.

Meet Mesa Boogie Formula Pre (buy it used between $400-$500). This unit is a tube-operated recording preamp designed to simulate the sound of miked amplifiers, specifically Mesa’s popular Heartrbreaker, Recto series and Mark I amps. (Mesa introduced another studio preamp based on their Rectifier series.) When used in conjunction with a power amp and a cabinet, the Formula Preamp can also deliver its versatility and tone in live applications.

The Formula Pre is a single rack-space unit set up like a standard amplifier, with three channels (rhythm, lead 1 and lead 1), separate tone controls for rhythm and lead, and a master five-band eq that’s very effective for shaping tone. (A four-button foot controller lets you switch among the channels and five-band band eq.) While the two lead channels share the same set of bass, mid and treble controls, the five-band eq can be set to kick in automatically when you switch to lead 2, thereby providing greater tonal variation.

Cramming all of these controls into a small space makes the front panel a little cluttered, but everything is clearly marked, and it’s easy enough to set up and make adjustments on the fly. The rear panel includes main outputs, record outputs, jacks for additional foot switches and a stereo effects loop with a mix control (the Formula Pre has no onboard effects). 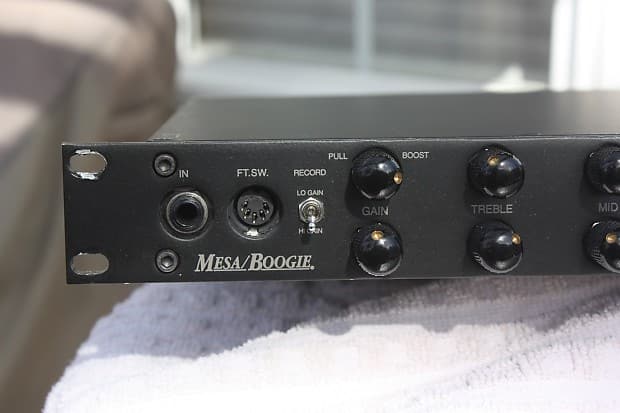 At the heart of the Formula Pre is a revolutionary recording circuit that responds to dynamic fluctuations the same way that a power amp and speaker do. Instead of simply running a passive signal, the circuit employs a reactive load that mimics an amplifier’s power transformer. In simpler terms, the Formula Pre makes your guitar sound like it was recorded through an amp, with none of the cold, harsh sounds associated with going direct. The unit uses five 12AX7 preamp tubes and delivers its remarkably amp-like tone into your board through a pair of ¼-inch outputs that can be used in balanced or unbalanced recording setups.

Tested with a Fender American Standard Stratocaster and a Japanese-made Les Paul copy, the Formula Pre highlighted the best characteristics of both instruments. Each of the unit’s three channels displayed its own personality, producing a wide array of sounds. The rhythm channel’s lower gain circuit really brought out the Strat’s clean, single-coil tone. With the gain turned up a litter higher and the boost employed, it offered a crunchy rhythm tone that had a distinctive blues-rock vibe with both guitars. Lead 1, was the most impressive of the three channels, with a smooth, warm and round-sounding distortion that made the Strat cry and the Les Paul scream. Lead 2 really kicked the Formula Pre into high gear with a compressed, high-gain tone that’s ideal for solos or a very crunchy rhythm tracks.

For about $400 – $500 used, the Formula Pre would be a hefty investment it were just a fancy direct box. Instead, it’s a versatile and great-sounding preamp with which you can achieve a wealth of sounds. The fact that it was designed to run direct—and sounds wonderful doing so—is simply one more reason to check it out. It may be true that nothing sounds quite like a really good amp cranked up to a deafening volume level, but the Mesa/Boogie Formula Pre simulates that sound as well as anything does. It is, indeed, as the old saying goes, close enough for rock and roll. https://www.mesaboogie.com