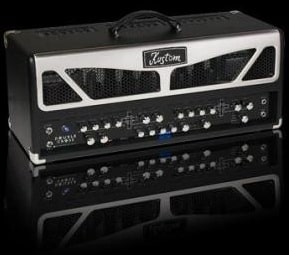 Kustom got metal? Remember back in the day when you might recall those kind-of-weird yet kind-of-cool colorful car seat-like padded tuck-and-roll jobs? You know, the colorful /sparkly padded amps Creedence Clearwater Revival were known to use back in the late Sixties and early Seventies…

Much has changed since then. Behold Kustom’s newest world-class all-tube, 3-channel, 100-watt guitar amp, the Double Cross. This is one mean animal, and laughs at the inane thought of padding. The Double Cross platform consists of three uniquely voice channels: Rhythm, Lead I and Lead II. You can tweak each channel via four separate function switches, the four switches are located at the four end points of the “Cross” displayed on the control panel (stylin‘, huh?). What’s more, these switches work more than simple EQs; rather, they allow you to blend additional 12AX7 tube stages and alter the gain/EQ/attack structure of the preamps. The amp’s four functions can be activated, omitted and blended in any combination to your personal taste. So, not only does this amp have style, it has flexibility. Nice, we like that!

The two lead channels are voiced fundamentally different, with Lead I catering to a modern heavy tone, and the Lead II is shaped more towards a traditional, high-gain “cranked” sound. Even though the Double Cross offers massive amounts of gain and distortion, the amp also blends in the extra preamp tubes in an innovated way so that it doesn’t change the tonal dynamics or sacrifice the touch sensitivity, regardless of the amp’s settings.

James Brown, designer of the Kustom Double Cross all-tube head describes his personal favorite sounds that the Double Cross can create. Go to www.DoubleCrossUSA.com for more videos and information.

All three channels of the Double Cross provide separate Gain, Volume and Presence controls as well as an independent EQ (Bass, Middle, Treble). There is also a global Master Volume and a Boost Volume control that can be activated with the Double Cross’s rugged 5-function metal footswitch (included with head).
–
Special features of the Double Cross include an all-tube, footswitchable effects loop, a EL34 / 6L6 bias switch for changing output tube types, a Tight input jack that tightens the attack response of the entire amp, and a 5-function footswitch that activates each channel, Boost function, and the effects loop.

A speaker cabinet-emulated direct out, drawn from Kustom’s Coupe Series amplifiers, has evolved into two signal options: (1) the tonal coloration provided by a slant-style 4 x 12, or (2) the distinct sound of a straight-style 4 x 12.

Damn straight this rig can blow the roof off any venue. The Kustom Double Cross online price is $1,599.99 U.S., which doesn’t make this unit the cheapest head on the market. However, on the other hand, what price would you pay for monstrous power and flexibility? See Musician’s Friend: Top Sellers

The Black Gold 35 is Kendrick’s attempt at bringing boutique amp quality and tone down to sane budget levels. With it’s all-tube circuitry, which includes a pair of 6L6’s pushing a duet of Kendrick 10″ […]

This mongrel duo is a mixture of sweetness and range. The Brownsville Choirboy is a well-behaved instrument that puts hollowbody jangle within most musicians’ budgets. Its bound body is charitably outfitted with three “toaster-top” pickups and a five-way selector, from which you can order up oodles of focused jangle, ranging from tight bit to silky jazz. The bolt-on maple neck has a pleasing profile and a plateless heel for upper-fret comfort, all of which is graciously aided by an adjustable bridge and truss rod […]