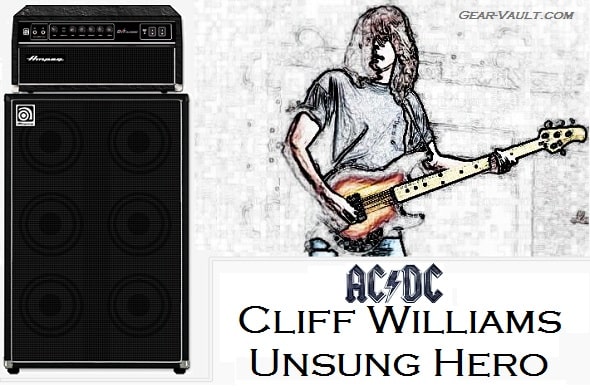 Since the beginning of time, there has always been an unspoken feud between guitar players and bass players. This feud has always been somewhat playful, somewhat serious. But in the end, we really do care for all you bass players. Oh sure, we poke fun at you guys constantly, for whatever reason will get a laugh at the moment it seems like.

But when you take away the rock stars and bring out the musicians, well then it’s a different story. The true musicians understand that a good bass player is an invaluable resource. Bass players that can work well in tandem with a drummer is something that gives the music exactly what it needs: Drive.

I mean, after all, it is the duties of the rhythm section to drive the band home, and if those bass hating, guitar nubs heard their favorite songs without the bass, they would cry.

So, as a tribute to all the bass players out there, my debut article for my column: Unsung Guitar Heroes, will be all about one amazing, but seldom discussed bass player: Cliff Williams of AC/DC.

Since the early seventies, AC/DC has been doing dirty deeds and blowing up our videos, all while flicking the switch of rock n’ roll. The first formation of the band included Bon Scott on vocals, Angus Young on lead guitar, Malcolm Young on rhythm guitar, Mark Evans on bass, and Phil Rudd on drums. In 1978 however, Evans was ejected from the band, and in came Cliff Williams. Not that Evans playing was lacking, but for me, (and many others)… well, let’s just say their rhythm section got a major boost from that moment forward.

Now I’m aware, there are many, many fans of AC/DC, and there is a good chance you have heard of Cliff. But the larger idea in this particular article is to go beyond the name on the record, beyond the subtleties of the bass work, and really get familiar with who he is as a bass player because I really believe that he is a true gem that isn’t really noticed, mostly because there is always a skinny schoolboy pulling his pants down in front of him.

Before we get to the music itself, let’s take a look at Cliffs’ rig; along with this article you’ll see a lovely diagram created by yours truly, and in researching his rig I was surprised. His rig is very simple, consisting only of a 1976 Music Man bass, with D’Addario Flatwounds, supported by an early seventies SVT Head and either an 8×10 or 6x 10 cab. No wireless equipment is used, just a straight cable, and that’s it! This guy doesn’t mess around with effects, or insane routes to get his tone, he just plugs in it and cranks it up. I love it.

Now, on to the music! If I could suggest what to listen to of his first, I would suggest “Gone Shootin’” of Cliff’s debut album with AC/DC, Powerage. This track has some unbelievable rhythm, and man does he lay it down, right in the pocket.

The more I listen to his work, the more apparent it becomes that his musical ideas on the bass are quite interesting. Because most of the time, bass players come in two classes; There are the straight groove guys, who don’t move much around the fretboard, but are there on every beat, laying it down. The alternative is generally the “I-play-the-bass-like-a-guitar” people. Cliff is a happy medium between the two. Not boring or unheard, by any means, but he knows how to rein it in and let the music happen.

A good example of this style in the middle sections of “Satellite Blues”, which can be found on AC/DCs 200 smash, Stiff Upper Lip. I would strongly suggest listening to this excerpt with headphones, it really accentuates the experience.

For my final suggestion, I would recommend “Hail Ceasar” off of Ballbreaker. Start to finish, this is a runaway train of bassey goodness.

So the point here is, Cliff Williams is no virtuoso, and he doesn’t do anything that is flashy or speedy, but man, that guy can throw down some dBs. Which is something no musician should take for granted; because an average bass player can make or break a band. So rock on, bassholes!

The topic of Angus Young, who is, of course, the lead guitarist in everlasting rock gobstopper AC/DC, comes up frequently in guitar circles, both with students and with peers. There are a lot of folks […]