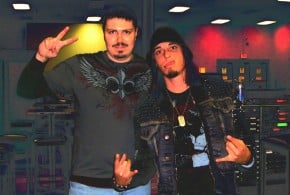 Wow, what a night! And boy do I have a story to tell. I wanted to publish a blurb last night for you Gear-Vault readers, but not arriving home until nearly 3 a.m. I was cashed, and trust me, in no condition to write. The wife and I got so much material through the entire event that we’ll have to break this experience down into parts. So we’ll start this story as the initial overview about what went down. The next story will be images and snapshots of Paul Phillips’ gear and set list. And our final story will be the sit-down, up close and personal, interview with Paul Phillips himself.

Let me first start off by saying Puddle of Mudd and crew are just awesome to work with. They all were very welcoming and accommodating. And Sparky, Paul’s technician, is an absolute gear head and knows his stuff! Sparky went through Paul’s rig with me with a fine tooth comb, and just talking gear with him was a connection on an entirely different level — I‘d surely like to pick his brain some more!

Our experienced began by us pulling in at Ground Zero around 3:45 p.m. I called the tour manager on his cell just to let him know that we arrived. I said, “Hey, this is Charlie with Gear-Vault.com, how are you, bro?” Of course, you’re expecting the standard and cliché answer “good”. Nah, not from this dude! His reply was “Living the dream, man, living the dream,” I love that! And by that response I knew the guy was going to be stellar! I would describe him as a no BS guy that knew the urgency of his job and responsibilities, but also someone who is going to have fun while getting it done. You never know what to expect when meeting a band’s tour manager because, obviously, they’re under a lot pressure with everything going on. With the huge responsibility of making sure the gear is set up and operational in time so the band is ready to rock must be a stressful job at times. But he was no-doubt a cool guy that loved his job.

After shooting the sh*t with P.O.M’s tour manager, he sent me up on stage to meet Sparky and do the rig photo shoot. As I said earlier, Sparky is a total gear head who is clearly living the dream; he really was in his element when talking gear with me. A couple of gear heads talking gear on Puddle of Mudd’s stage 4 hours before the show kicks off. I was in my glory!

I was kneeling down shooting some images of Paul’s rack and amps when I heard Sparky say “Hey, Paul!” I turned around and there he was, the guitarist, Paul Phillips, right behind me. I stood up and shook his hand and introduced myself. His body language was really inviting; him talking gear seemed more like a pleasure than an ‘interview’ to him. You’ll have wait for the next rest of the story to get the low-down on Paul’s gear, guitars, his advice to inspiring guitarists and more.

Stay tuned! Until then, read Sarah’s blog of the MUDD show. Also check out the image gallery of the Puddle of Mudd show.

So, for fun I typed in “best guitar” into YouTube’s search bar and came up with DavidMeShow’s “Best Guitar Improvisation Ever“. Interestingly enough, this video was viewed over 8.5 million times and has nearly 67k […]

Mesa/Boogie Engineering–a company that specializes in making amplifiers for guitars, bass, and rock in roll fanatics… Yes, for you! One of the most legendary amplifiers from Mesa/Boogie is the Rectifier series, which we more commonly […]