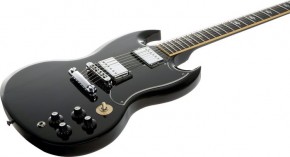 The SG is one of Gibson’s most iconic models, and many famous players are closely associated with it—including Black Sabbath’s Tony Iommi, Cream-era Eric Clapton, Radiohead’s Thom Yorke, System of a Down’s Daron Malakian, and of course Pete Townshend. But perhaps no guitar/artist pairing in Gibson’s history is more iconic than that of the SG and Angus Young of AC/DC. Whether he’s duckwalking across the stage in his schoolboy uniform, ripping out immortal riffs, or head-bobbing while thrashing out searing blues-based solos, it’s almost impossible to picture Angus without his trusty Gibson SG Standard.

Angus’ original go-to axe was a red ’68 SG Standard with a Lyre vibrato tailpiece, which he swapped out for a more string-stabilizing fixed tailpiece. Gibson’s new Angus Young SG reflects that modification, as well as other “wish list” items that comprise the AC/DC lead guitarist’s ultimate SG. Features unique to this model, which Angus and Gibson collaborated on, include distinctive lighting bold inlays for fret markers and an Angus Young model pickup in the bridge. But other classic hallmarks that have made the SG Angus’ axe of choice are all in evidence too, with some crafted according to Angus’ specifications, and some simply reflecting the best qualities of the various SGs Angus has owned throughout his career. Let’s see what winning combination of classic and custom elements make up this very special guitar.

The Angus Young SG’s body is made of solid mahogany, sculpted in a thin, flat-top profile with beveled edges, and is lightweight while still delivering excellent resonance and sustain properties. The black is scooped in the upper portion of the waist as well, allowing the guitar to fit snugly against your midsection and augmenting the guitar’s already slender, streamlined feel. The neck is also solid mahogany with an ebony fingerboard sporting the aforementioned lighting bold inlays and a cream-colored binding that transition into impeccably dressed frets. The neck profile is ultrathin, measuring 0.775” at the first fret and only 0.85” at the 12th fret. Now, that’s slim—and fast!

The headstock features the classic Gibson logo with Angus’ signature etched in white on the truss rod cover. The vintage-looking Kluson-style tuners have a 14:1 gear ratio and are capped with classy looking pearloid buttons, recalling the original Klusons used on ‘60s SGs. When strapped on and adjusted into playing position, the guitar feels balanced, light, and speedy. It’s just waiting to take off!

In the pickup department, the Angus Young SG is fitted with a Gibson ’57 Classic in the neck and a Gibson Angus Young model in the bridge. The specially made back pickup is a vintage-style, two conductor type, just like its rhythm-position counterpart. For that classic hard rock, raw sound, nothing beats the ’57 and its dead-on emulation of the original PAF humbucker. The difference between the ’57 in the bridge and the neck is that the Angus version is over-wound to produce a higher output signal and is powered by an Alnico V magnet for greater punch and clarity. Despite the increased kick of the back pickup, I found the two ‘57s were well-balanced regarding their respective output levels. Going from neck to bridge always felt organic, and I never had to ride the bridge pickup’s volume knob to manage the transition between the two. This well-balanced quality also came through with the selector in the middle position (both pickups on). This was my favorite setting for scratchy funk and moving-chord passages, producing just the right blend of chordal girth and high-end snap.

The electronics echo the original SGs of the ‘60s with separate volume and tone controls for each pickup, and a three-way pickup-selector switch tucked conveniently between the control area and the pickguard, allowing for quick pickup changes. The volume controls are configured in the classic SG way with linear 500K potentiometers, while the tone controls feature non-linear 300K pots with a 0.0223mf capacitor for a smother treble roll-off. I found that I could back the tone controls off quite a ways and still have full-sounding, musical tone without sucking the life out of the high end. This was especially true in the bridge-pickup-only situations, where I could take off a little top-end brittleness using just the tone control and not have to switch pickups.

To be true to the AC/DC ethic, I plugged the Angus Young SG into a Marshall JT45. I started out with the neck pickup, playing low-position chords with just a hint of furriness coming from the amp. The sound was warm and full, perfect for blues, blues-rock, and hard rock rhythm playing. In higher-gain settings, the ’57 beefed-up considerably, getting a bit more surly yet kept its clarity and focus.

Kicking the pickup selector down to the bridge pickup, the guitar fairly explodes, delivering punching low notes, crunchy chords and raw, searing single-note leads. Though the Angus Young pickup has the full and thick mids characteristic of all humbuckers, there’s an extra crispiness and snappy, almost percussive response in this overwound ’57. It’s letter-perfect for ripping out edgy riffs and stinging leads for rock—both garage and classic, punk, and metal. In other words, anything that needs some severe attitude. And speaking of attitude, the riffs to “Highway to Hell,” “You Shook Me All Night Long,” and “Back in Black” never sounded truer or more honest than when delivered with the full-throated roar from the Angus Young SG’s back pickup.

Beyond the Gibson craftsmanship, unique appointments stemming from the manufacturer-artist collaboration, and the classic tone, the quality that stands out most in the Angus Young SG is its playability. It’s perhaps the lightest and fastest-fretting SG I’ve ever played. The neck’s slim profile, thin body, and overall lighter weight, topped off with super-low action, all contribute to a playing experience that borders on effortless. That, combined with the guitar’s rip-roaring back-pickup sound, makes this SG capable of creating immortal riffs-either in homage to Angus or when building your own legend. Find great prices on the Angus Young Gibson SG guitar.

You can play the Wavedrum in your lap, or mount in a regular-old snare stand. It’s lightweight and compact, perfect for any percussion, drum-set or DJ setup. You can even park it next to your studio console to catch those sparks of percussive inspiration. […]