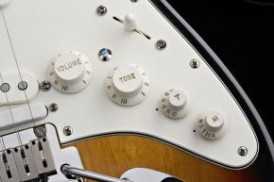 Imagine if you could bake a pie but had no idea what the ingredients were. Or if you could write a beautiful poetry without having a clue as to what the words you were using meant. Sound far fetched? Preposterous? Maybe, but this is the bizarre world in which so many rock guitarists operate. We play lush, complex chords and have no idea what notes they are composed of. We can whip up lyrical leads and never once stop to think what scale we are employing. In short, thanks to the pattern-and-shape-based nature of our instrument, guitarists can play music and know virtually nothing about music.

But you can’t sell your soul at the crossroads and expect a refund. Eventually, the day will come when your brain betrays the guitarist in you and things, “Gee, I wish I had access to more sounds…it would really be cool to have a keyboard part under the chorus of my spiffy new song.” And boom! You—once just a blissfully ignorant guitarist—will have to become a musician. “What are the notes in the D chord?” (D, F3 and A, if you were wonding.) “Where is D on this damn keyboard, anyway?” “What are these black keys all about? Are they just there because they look cool?” Suddenly, playing the simplest chord progression will become a nightmare of epic proportions, one were clef-shaped demons come screaming out of the blood red sky, strafing you mercilessly with sharps and flats.

Or maybe not. Enter the Roland GR-30 Guitar Synthesizer, the magic box that will let you stay stupid (and I mean that in the nicest way) and sound groovy. Built into a sturdy floor unit not much bigger than most multi-effects processors, this nifty sound generator will allow access to a world of tones previously reserved for keyboard totin’ music geeks. And while traditional guitar chord fingerings don’t allow you to recreate the widely spaced chord voicings that many keyboard players might favor (unless you have wicked, two-handed tapping technique like jazz virtuoso Stanley Jordan), in situations where you are imitating instruments that employ vibrato and plucking, the guitar’s uniquely expressive, dynamic quality will allow you to sound more like the real thing than an ivory tickler ever could.

In order to access the myriad of cool tones locked inside the GR-30, you’ll need a guitar equipped with a Roland GK-2A, a pickup (actually six, string-dedicated pickups in a single housing) that registers the frequency and amplitude of the string’s vibration and sends it to the GR-30, where the data is expressed as pitch, volume and tone. While these pickups can be installed on most steel stringed acoustic and electric guitars, the work must be done very precisely in order for the GK-2A to track your performance correctly.

That’s where Fender comes into the picture. The company marketed the Roland Ready Stratocaster around the time of 1997 – 1998, a guitar into which the GK-2A had already been expertly fitted, with all of the pickup’s peripheral switches integrated into the instrument’s control layout. In addition to guitar-only volume and tone controls and the familiar five-way pickup selector found on most Strats, the Roland Ready also houses controls for the synth volume, two buttons which allow you access to various functions on the pedal board, and a three-way mini-switch that selects whether guitar sounds, synth sounds or a mixture of both travel to the GR-30 via the proprietary 13-pin connector cable. The guitar could also be used with other Roland products, such as the VG-8 virtual guitar system. 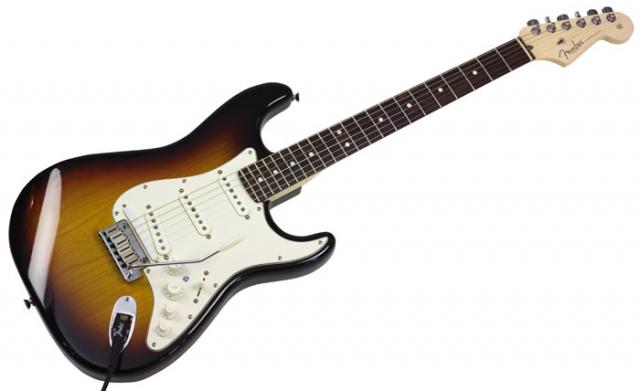 The Strat we tested was a fine-playing and –sounding instrument of Mexican origin, with three single-coil pickups, a smooth, well-finished rosewood fretboard and a vintage-style non-locking tremolo system. If you plan to experiment with extreme wang bar effects during your forays into synthhood, I might recommend procuring a guitar with a locking tremolo system, but the Roland Ready’s hardware stood up to regular use without undue tuning problems (besides, the GR-30 has a handy built-in tuner). And unlike many failed guitar-synth systems of the past, this puppy tracks like a hungry bloodhound and translates data nearly flawlessly, capturing the most subtle vibrato and pitch shifts with amazing ease.

Which brings us, finally, to the Roland GR-30 –

The rear of the unit is equipped with stereo outputs (each output also doubles a stereo headphone jack) for the synth sounds or for a mix of synth and guitar sounds, and guitar send and return jacks which can be used to send only the guitar sound to your amp or as an effects loop for the guitar signal. A MIDI in jack accepts data from any number of devices (MIDI patch controllers, sequencers etc.), while a MIDI out jack enables you to trigger other synths with the GK-2A or to send performance data to a sequencer. Finally, there are inputs for an external expression pedal and a bank shift pedal. The front of the unit has four pedals which do double duty as patch changers and expression pedals (pitch bend and wah—there are, believe it or not, 35 different wah presets—among others). The other controls are two large rotary knobs used for editing purposes, an edit button and value buttons which access “Edit Mode” or scroll through patches quickly in “Play Mode.”

Powering up and breezing through the GR-30’s 128 factory presets reveals scores of patches that sound great out of the box—even if they have completely annoying names like “Angklung,” “Harmoscat” and, perhaps most irritating of all, “Fantavox.” From mellifluous flutes to horny horns to spaced-out ambient pads and “beam me up, Scotty” electronic blips, it’s all in there. Some of the presets are too heavily effected and overblown, but all can be tweaked, re-tweaked and triple-tweaked (more on that later) to individual tastes. The only thing missing, in my opinion, are a few more retro patches. Mellotron, Moog and Hammond organ facsimiles would all be nice touches.

Once you’ve had your fun experimenting with the sounds that the people at Roland think are cool, it’s time to roll up your sleeves and begin creating sounds to fill the 128 spots available for user presets. Each patch on the GR-30 can be created by layering two of the unit’s 384 internal sounds and then tailoring a wide variety of parameters to your specific needs. Say, for example, that in a given song, you want to play a fuzzed-out lower-register synth sound during the verses and break into a trippy sitar solo in the bridge. You can select one of two “Electric Sitar” sounds as the first tone in the patch and “Distorted Organ” as your second. Then you can adjust the relative volume of the two sounds in the “Tone Mix” mode or even assign the different tones to different strings. So, for example, the lower three strings could only produce the dirty synth sound while the other three would be reserved for your sitar freakout.

Once you’ve selected your two basic tones, there are still oodles of parameters that can be toyed with. The attack (the amount of time it takes each tone to reach its maximum volume when a string is plucked), release (the amount of time it takes for a note to die out) and brightness of each individual tone can be adjusted. (Don’t forget that, in addition to all of these sounds, you can opt to mix in your guitar sound, a third infinitely variable tone, as well.) Internal effects (the GR-30 comes complete with 18 different reverbs—rooms, halls plates, etc.—and 25 different chorus settings) can then be applied to the patch to add depth and thickness.

But in a unit with more cool features than you can shake a MIDI cable at, perhaps the most impressive are its Harmonist and Arpeggiator capabilities. The Harmonist is similar to many of the intelligent pitch shifters that have on the market for several years now, and allows the player to preset the key and intervallic spacing between the notes that are played and those that the synth generates as accompaniment. This information can be saved with the patch. So, returning to our aforementioned sitar freakout, if you want to sound not like one, but two sitarists taking it to the karmic limit by playing a harmony in thirds, and assuming you know what key “Sitar Freakout” will be performed in, then you can save all that information along with your patch so that it’s all ready to go at the tap of a foot.

The Arpeggiator is an even more exciting beast in that it allows you to have the synth play a series of notes in succession, at a programmable tempo and rhythm. Imagine, for example, that you want to create a vibe similar to the Who’s “Baba O’Riley,” which requires the guitar to be whacking out sparse, blaring power chords while a pattern repeats in the background. You can instruct the GR-30 to crank out rhythmically locked synth arpeggios (or slap bass, if you’re still stuck on it, sitar or whatever) while you strike your favorite windmilling rock pose. I also found the Arpeggiator extremely useful for generating digital delay-like patterns reminiscent of the Edge’s playing on U2’s “Where the Streets Have No Name”—and I only had to hit one note at a time instead of moving my picking arm up and down in tempo with the song.

The list of adjustable parameters goes on and on (stereo panning, semi-tonal transpositions, etc.), but suffice it to say that if you decide to spend the rest of your life tweaking the GR-30’s sounds, you definitely will have enough options to keep you busy until they pry the Roland Ready Strat from you cold dead fingers—and they’ll never get that shit-eating grin off your face in time for the funeral.

Armed with a Roland Ready Strat and a GR-30, any guitarist will find his or her maiden journey into the world of guitar synthesizers to be a satisfying and amazingly glitch-free experience. And while a basic understanding of music theory will definitely prove necessary for players who want to get hot and heavy with the Harmonist and Arpeggiator functions, you can still explore an infinite number of sonic possibilities—without learning what those pesky black keys on the piano are all about.

People in the 1950s thought that we’d all be wearing jetpacks and driving flying cars about now. But did they bother to predict what kind of guitars we’d be shredding on? No, they didn’t. Probably […]