Whether its the hands of a sculpture, the pen of a writer, or a voice of a singer, the ability to shape an artistic medium contributes wildly to the captivating nature of art. Nowhere is the impact of shape more relevant than in the history of B.C. Rich, an all American guitar company. Like any successful company, the founder, Bernado Chavez Rico, had a strong personal connection with his product, a connection which helped him to understand the colossal significance of shaping both tone and design in modern day music. As a celebrated Flamenco and Classical style guitarist, Bernie’s knowledge of the extreme degrees of tone, playability, and uniqueness demanded by top notch musicians from their instruments certainly played a consequential role in developing what would become choice company of Aerosmith, Slayer, and numerous other players. But famous clients such as these are not how B.C. Rich began; no, it began instead in a cramped workroom in East LA.

The Mockingbird was so popular that GuitarWorld actually ranked it number one in their “Coolest Guitar” contest. To put this into perspective, B.C. Rich’s humble designs outcompeted classics like the Les Paul and the Strat

You can almost feel the sweat, in that tiny workroom. Lined from wall to wall in guitars, mandolins, banjos, ukeleles, and other instruments all bearing the Rico mark, the room certainly felt far too small for its occupants. Filled with an ever-shifting menage of twanging Flamenco guitarists, Bernado Chavez Rico and his father’s workshop is the stuff of legends. The empty glass soda bottles, littered around the shop, would have drawn one’s eyes away from the guitars, away from the motorcycles and the tools, and even away from the flourishing musicians in the corner. The cluttered room must have felt extremely full during its heyday, but no matter how overfilled the room seemed, something must have been missing. You see, this was the 1950’s, and for the first time, America was being ravaged by the raw and perfectly unrefined sounds of a distorted electric guitar. The howling voices of Chuck Berry, Buddy Holly, and of course, The King, must have had a strong influence of Bernie, as in 1969 he created his first electric guitar. This set into motion the company that would become B.C. Rich Guitars.

The first originally designed guitar Bernie created after taking a step into the electric realm came three years later, and was called the Seagull. Featuring thunderous humbuckers, four simple knobs, and an impressive spike protruding from the guitar body, the Seagull was B.C. Rich’s first foray into creating uniquely shaped guitars. Though the fabled tone may have sold the Seagull, it was definitely the shape of the body that first captivated players. As the company grew, more and more prominent guitarists sported Seagull’s, including Dick Wagner, who is famous for his work with Alice Cooper and Aerosmith. After creating the Seagull in 1972, the rest of the 1970’s found Bernie very busy juggling the management of a rapidly blooming company and crafting the designs of new models of guitars. The next guitar manufactured during this period was the Mockingbird. Readers familiar with the companies history will recognize the Mockingbird as the iconic guitar played by Joe Perry, Slash, and numerous other stars. With a heavily slanted body shape and an intriguingly curled cutaway, it was no wonder the Mockingbird quickly grew extremely popular.

The Mockingbird would branch into a number of different designs, and become one of B.C. Rich’s best selling guitars. The Mockingbird was so popular that GuitarWorld actually ranked it number one in their “Coolest Guitar” contest. To put this into perspective, B.C. Rich’s humble designs outcompeted classics like the Les Paul and the Stratcaster.

So far, two of the guitarists associated with Aerosmith owed much of their iconic tones to B.C. Rich. With the advent of the Eagle, this number would increase to three, as guitarist Brad Whitford was often known to play an Eagle. Because the Eagle was essentially a heavily modified version of the Mockingbird, players found the same stellar tone and precise control they had grown to love. However, the shape of the Eagle was somewhat toned down in comparison; the body spike was eliminated, and the cutaways grew longer on the top and shorted on the bottom. This gave the Eagle a very forward oriented, sleek design.

This classy design lends its hand to the success of the Eagle among mature, refined players looking for a respectable instrument. Luckily, B.C. Rich knew that rock music is about more than a elegant instrument; Bernie himself knew that sometimes people just want to get down. Banking on this principle, B.C. Rich introduced a new guitar to its lineup in 1978: the Bich. The flying angles, distinctive triangle cutout from the back of the body, and the eventual 10-string design of the Bich all scream rock n‘ roll. The Bich would go on to become B.C. Rich’s most successful product to date. The guitar was developed by Neal Moser, who worked with legends including Hendrix and Crosby. Due in large part to Moser’s contributions, the sheer impact of the Bich cannot be underestimated. Since its inception, the Bich has gone on to inspire countless musicians and a number of Chapelle Show puns.

Though the Bich would become B.C. Rich’s most popular guitar, it was certainly not their last. The next guitar, and the last in what purists consider the five classic Bich shapes, was the Warlock. Borrowing the triangular body cutout from the Bich, the Warlock sharpened its angles, and in the process became the pointed figurehead of the 80’s metal scene. From Slash to Nikki Sixx to Paul Stanley, no single guitar changed the face of the heavy metal genre as much as the Warlock. One of the key distinguishing features of most of the Warlocks was the signature Beast headstock. Featuring two spikes jutting past the tuning pegs, the headstock of the Warlock appears the most brutal bottle-opener in history. With such a revolutionary body and headstock, the Warlock gifted the metal scene with a guitar that looked as great as it sounded.

Despite the advent of the Warlock ending the period of the classic B.C. Rich guitar designs, the company has by no means stopped producing innovative shapes and styles of guitars. Now featuring guitars in over 13 shapes, B.C. Rich has vastly expanded its collection since the days of the Warlock. One of the more notable designs is the V. Shaped much like the classic Flying V, B.C. Rich has done much to improve on this classic design. Some designs, such as the Kerry King series of V’s, show only slight changes from the original V design, but others feature much more elaborate alterations. The Beast V, for example, combines the classic V design with the body shape of the Warbeast, a modified Warlock. The ensuing combination results in a guitar with the classic V shape but with a distinctly metal twist.

Perhaps the most unique of the V variations, however, is the Draco. The classic V shape is constructed by two opposing licks of fire. The flames, decorated by a decal, form the actual shape of the guitar body. The intense, savage sound of a Draco perfectly mirror the appearance of the guitar, making the guitar overall one of the better project B.C. Rich has embarked on.

B.C. Rich has created a number of iconic guitars throughout its 44 year history; many of them have been mentioned in this article but not all. The company has become one of the most revered brands in the guitar manufacturing industry, and has found particular success on the metal scene. From the beginning bedroom shredder to giants like Slayer, B.C. Rich guitars can be found anywhere musicians need an instrument that looks as impressive as it sounds. 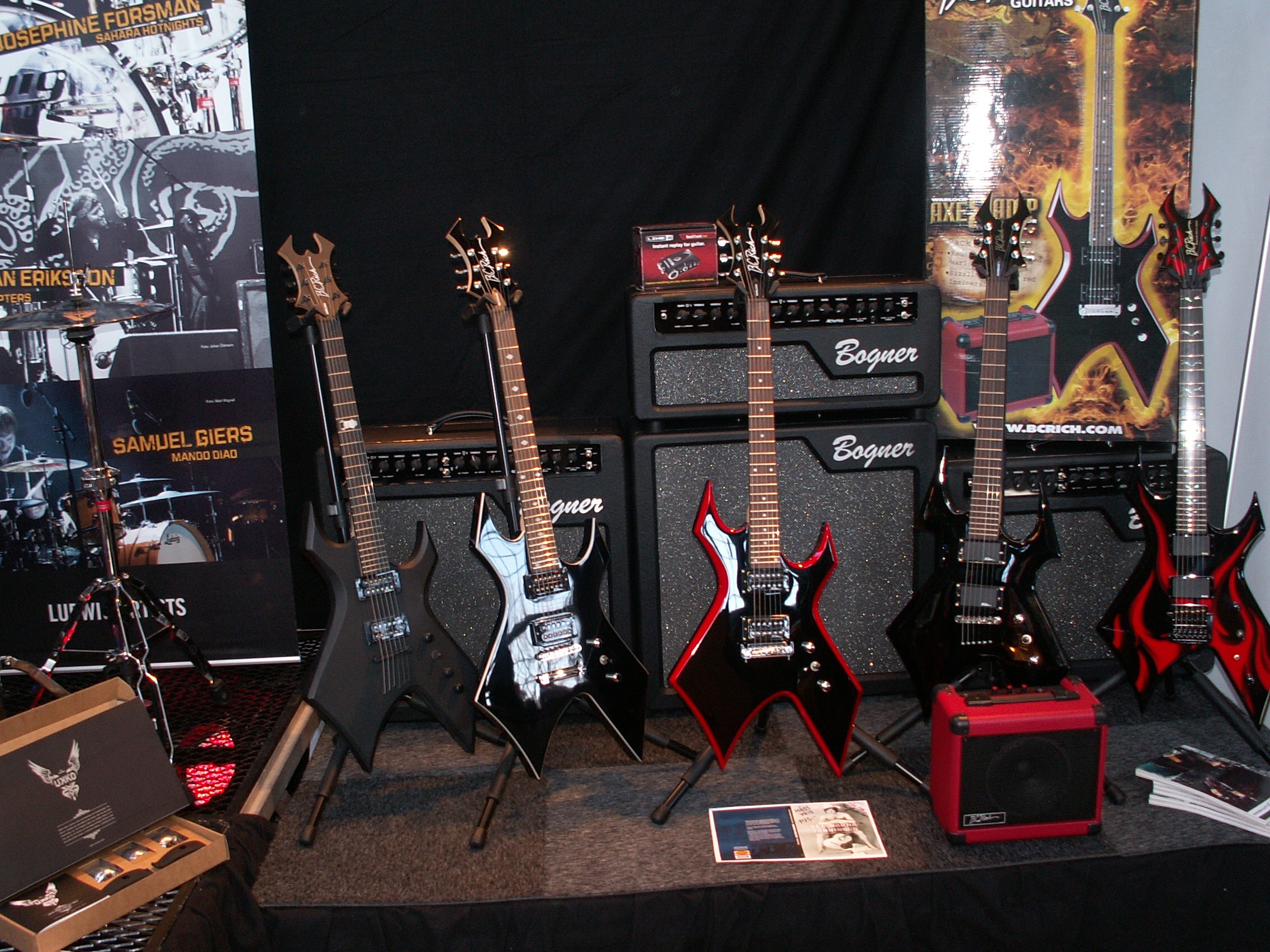 Kerry King and Jeff Hanneman’s paint-splattered Gibson Les Paul Standard and BC Rich Mockingbird have much to answer for. After all, they’re the axes that helped launch Slayer’s now infamous legacy of brutality. “That Les Paul […]

There is a seemingly ubiquitous appreciation today for nostalgic pop-culture references that hail from The ’60s and now span into contemporary days, spattered with some of the most memorable faces, infinite historical moments, countless celebrated […]