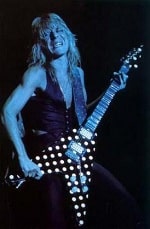 It’s been a long time since Randy Rhoads left us but there are many who still rave about his characteristic crunch. Randy had a slight different sound from album to album but it usually had a sort of thin and bright, nasally tone. He carried quite a few guitars but was usually seen with his Les Paul and of course his famous polka-dotted flying V.

To go for Randy’s sound on “Over the Mountain” from Ozzy Osbourne album Diary of a Madman, start with a standard distortion pedal. Crank the gain control wide open, the tone at about mid, and the level set at a comfortable level (comfortable being relative). Pay close attention to the amount of distortion the pedal produces; many just won’t have enough grind. If this is the case, switch to a metal type distortion but increase the tone or presence control to one or two o’clock. Next in the chain of effects is an octave pedal for use on the first of the solo. If you’re lucky enough to have a real pitch transposer, set it for one octave down using a chromatic scale type and play the high part. Keep in mind this will not sound exactly like it does on the song but it will sound a lot closer than if you went without. Last is the stereo chorus set to simulate the double guitar. Leave it on for the entire song.

Try it and report back. Tell us what you think.

Musical theory is no ones favorite topic, especially if you’re a beginner. How ever it’s something you cannot avoid if you eventually want to expand beyond basic open chords and barre chords. In this article […]