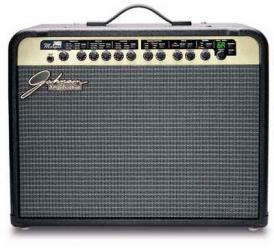 The ascension of digital modeling technology in amplifier design continues. The latest entries in the tone-cloning competition come from Crate and Johnson, who bring out the contest remarkably similar packages. Both the Crate DX-212 and the Johnson Marquis JM60 arrive in combo format, with easy to tweak knobs in addition to digital keypads, begging to be played live in the studio or taken out to gigs. Both amps serve up a popular selection of models (the Crate offers 16, the Johnson 18), nine effects plus reverb, and comparable wattage, with Crate delivering 100watts stereo and Johnson 120 watts stereo. It should be noted that Crate’s DX-212 comes in a 2×12 format, while the Johnson Marquis JM60 ships with a single 12-inch speaker putting out 60 watts mono. To cash in on the stereo sound and the extra 60 watts, the review model was hooked up to the company’s J112 satellite cabinet as an option only. When will the amp makers learn that you can’t play guitar and switch panel settings at the same time?