Created by Fender’s Custom Shop, the Fender Vibro-King guitar amplifier is a blues-approved vintage Bandmaster configuration with some perfectly appropriate vintage effects. A sound you’re going to love. This amp is on the pricier side. A Vibro King on the used market could set you back at least a $1,000 bones.

The point-to-point-wired Vibro-King provides a single channel with a “stand-alone“-style reverb circuit, tremolo, and a “fat” switch. The flexible reverb system has controls for mix, tone and a dwell knob to control effects sustain. 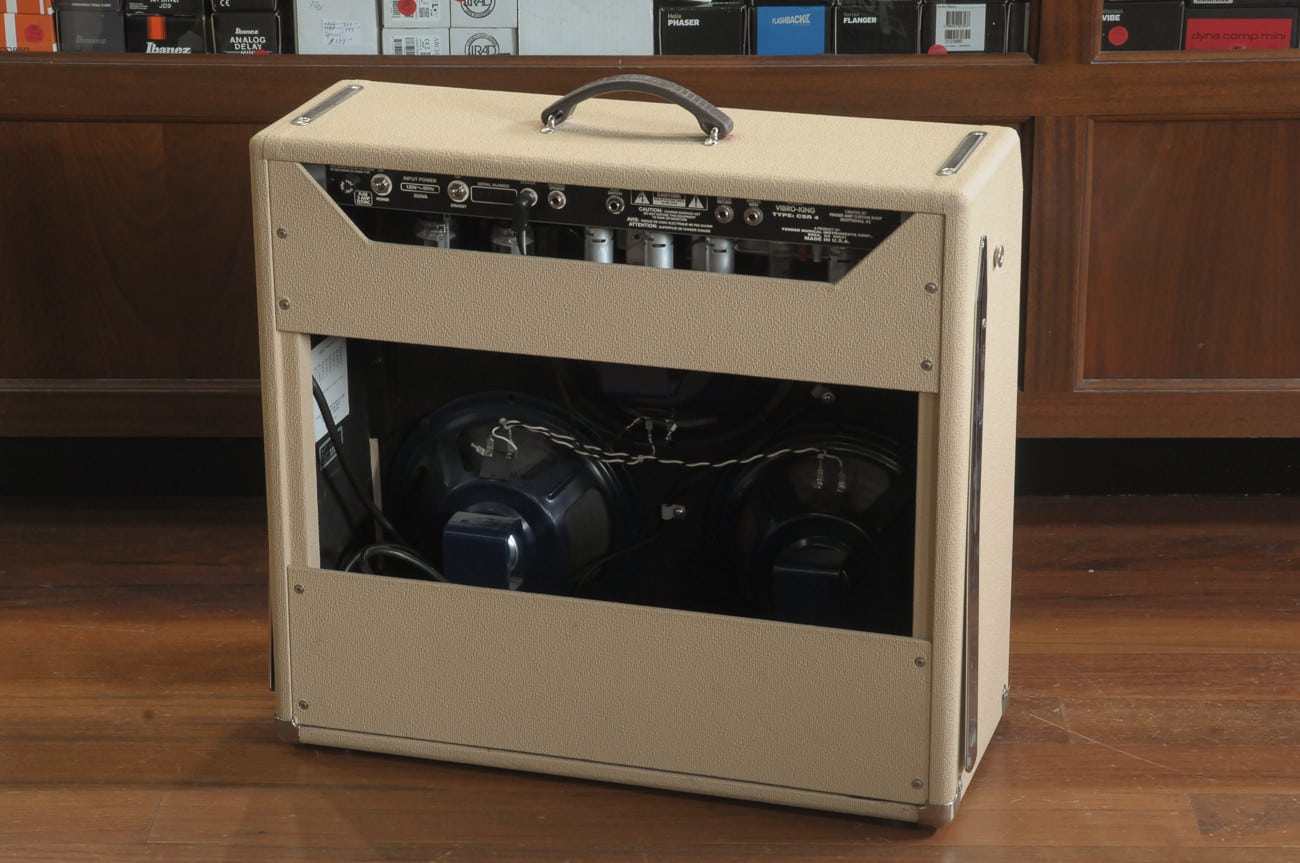 With that range of control and flexibility, you can create every kind of reverb, from a tiled shower stall to a subterranean cavern. While the tremolo circuit provides a wide range of oscillation, the intensity seems just a bit on the shy side; the effect only begins to kick in at the halfway mark and never quite achieves the extreme “on-off” sound of later model Fender amplifiers.

The “fat” switch, on the other hand, is probably outlawed by Richard Simmons, so generously does it dish out the added girth many players seek in a combo amp.

With its volume set at 3, the Vibro-King delivered a tight, detailed voice that was a shade more biting than the classic clean sound of the Sixties Twin or Pro.

The high end snapped like a fireplace full of dry pine, the lows enveloped the room like a big down comforter and the midrange was both as solid and complex as a time-tested friendship. Stepping on the “fat” switch caused the bottom to thicken dramatically, while the overall sound became (even at this low volume) more compressed and edgy..

As the volume approached 12 o’clock, the amp entered its “magic touch” zone, where soft notes rang clean and true, and every increment of dynamics transmitted a different shade of grit. With the “fat” switch engaged at the setting, Strat players will find their single-coiled pickups morphing into corpulent humbuckers, and Les Paul players will achieve a creamy, yet responsive “violin” distortion. Upping the volume further simply allowed the King to wear a progressively thornier crown, while the guitar retained control of the sound. Heavenly.

From 1998 to -present the 60-watt combo Fender Vibro-King is one of Pete Townsend’s go-to stage amplifiers. Do you like The Who? we do!

Why is it that your first electric guitar often tends to be your most forgettable? The only thing I remember about my first guitar was that it had strings like a cheese cutter and came […]