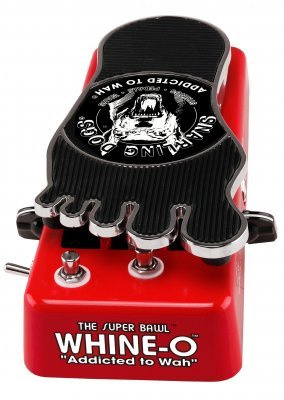 Charlie Stringer, who passed away in 1999, had a reputation as to what Jerry Springer has to day-time talk shows—loud, controversial and whole lot of fun. Like your ex-girlfriend’s transsexual lesbian lover, his Snarling Dogs pedals slap you silly with their incredibly over-the-top effects, outrageous sound quality and knock-out prices that even a Wal-Mart check-out clerk could afford. But don’t be fooled by the fact that his products are more fun than a hot tub full of strippers and cheaper than a date with a White House intern: Snarling Dogs pedals are professional-quality effects that even the most persnickety tone snob would gladly step on.

Charlie Stringer explored the wonderful world of wah, giving birth to an impressive litter of Snarling Dogs puppies. No matter how perverted your taste in wah, chances are Charlie makes a pedal that’s just right for you. We tried out eight different models—actually seven wahs and one black sheep: the Erogenous Moan. We’ll get into that later.

The pedals, which were designed by Kenny Segall, have several features in common: heavy-duty steel cases, foot-shaped rocker pedals that resemble the gas pedal in a Seventies-era custom van, and a vicious-looking dogface logo with bright red LED eyes that light up when the effect is engaged or “wink” at you to indicate when various modes are on or off. In addition, each pedal is painted in colors that must have been inspired by the evening wear in a Long Island hooker’s wardrobe.

The Wonder Wah 2 (discontinued – but still available on the streets) is the simplest pedal of the bunch, featuring and effect on/off switch, classic and vintage mode, input, output and jack for a 9-volt adapter. This is a great utilitarian wah with a deep, throaty growl and a vocal-like midrange but none of that overly piecing treble that makes so many wahs almost unusable.

Stepping up the options, the Whine-O-Wah has the same features as above but adds a volume control and a three-position switch that lets you select different eq characteristics—“Shaft,” “Voodoo,” and “White Room.” As the name suggest, “Shaft” has a pronounced treble bite that’s great for percussive, muted-string effects, “Voodoo” provides a rich, classic wah effect with a thick, vowel-sound midrange, and “White Room” has a darker tone with deep, well-defined bass (no indecipherable mud here). Stringer also offers a “tamed” version of the Whine-O, which offers a narrower eq sweep range. A bass version of the Whine-O, called the Bawl Buster (recently discontinued), has all the features of that pedal with a more-pronounced bass eq.

Adding even more features to the fun, the Super Bawl Whine-O has all the gizmos of the regular Whine-O plus an on/off switch for engaging the hormone control, which features a rocker switch to select the gentler “estrogen” tone or the balls-to-the-walls “testosterone” setting. In addition, the Super Bawl adds on a “twinductor beef boost” that, when activated, thickens the “wah” until it feels like the pedal is sitting on your chest. With all these tonal options, the Super Bawl Whine-O can sound like just about any wah pedal imaginable. Stringer also offers a variation of the pedal, the Super Bawl Fire Bawl 2-Alarm Wah, which eliminates the three-position Whine-O tone option.

Combining the Snarling Dog’s Blue Doo distortion circuit with the Whine-O wah, the Blues Bawls is described as “Wah That Hurts.” Fortunately, Charlie isn’t talking about that wallet in your back pocket. The distortion circuit is engaged with a footswitch on the top right corner of the pedal, and separate volume and distortion controls allow you to dial in tones from screaming blue overdrive to vicious metal raunch. The addition of a distortion circuit is great for players who like to use wah on their solos and need some extra “oomph” to cut through the mix.

And now for something completely different: the Erogenous Moan. Although it looks like a wah, it’s actually a reverse-tape simulator that imitates the swells of a backward guitar when you rock the pedal up and down. At the pedal’s uppermost and lowest sweep points, a slightly audible click is produced to imitate the shaper attack of a pick hitting the strings. It takes some coordination to produce a convincing backward effect, but once you master it, people will think you’ve channeled Jimi’s spirit.

These Snarling Dogs inject a whole lot of badly needed fun into the pedal business, the likes of which haven’t been seen since the heyday of Electro-Harmonix. Once you play one, you won’t be able to stop. https://www.snarlingdogs.com/

Fractal Audio Axe Fx Overview The Axe-Fx is a breakthrough guitar amp simulator and studio effects processor. Unprecedented computing power is dedicated to driving its highly detailed algorithms that deliver the sound and feel of […]

The world has never been the same since Line 6 unleashed the original POD in 1997. During that time just walking into a guitar shop, recording studio, or early adopter’s home resulted in one or […]

Guitar technology has come a long ways, especially in the effects world. From stompboxes up to digital amplifiers, the evolution is always evolving. By the time you buy the latest-and-greatest effects processor, to the time […]