Buying an acoustic guitar depends more or less entirely on the plan you have for the guitar and also the experience you have using one. For instance, if you are a beginner then you will want an inexpensive guitar that you can try your hand at first without needing to spend too much money. Such a guitar should also be not be too much of a loss if it gets damaged of course, many guitarists starting out tend to break, scratch and end up deforming their guitars! Of course this does not mean that such a guitar is low in quality. Modern production techniques have greatly reduced the price of guitars which look and sound just fine. 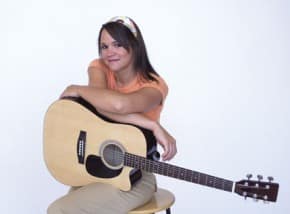 On the other hand if you are a good enough a guitar player (or a guitar veteran), then you will probably not willing to settle for anything but the best. In this case you will no doubt have collected years of knowledge about guitars, brands, to do’s and not to do’s. In any case, in this article we shall cover all the essential basics that you should know about acoustic guitars so that your next purchase can be your best one yet!

This is really essential and you need to know what parts go into a guitar’s construction as this determines the quality of the guitar’s sound to a great extent. A guitar consists of: 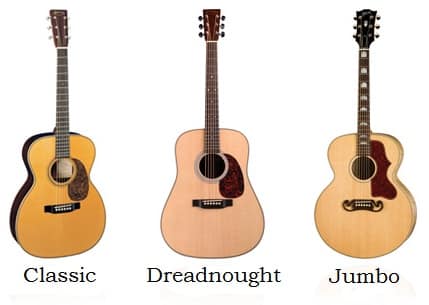 Selecting the right body style can seem confusing at first, however with a little knowledge about how guitar bodies are designed and what purpose they serve, you can find a body type which is best fitting to the kind of music that you want to play.

One guitar make which is pretty different from the traditional from the traditional acoustic guitars is Ovation. Ovation significantly differed from its predecessors in that it chose to use a specially developed fiberglass for the body called Lyrachord which had good reflective properties and was also resistance to heat and humidity. Despite being criticized by guitar purists, the brand remains successful for 35 years now.

These are traditional acoustic guitars with an added pickup connected to an amplifier so that the player can move about freely without needing to stand in one place all the time. The most common pickups in use are the Piezo pickups which are essentially crystalline structure which sense changes in sound compression and emit a matching electrical signal.

The most important thing that you need to consider is obviously the kind of tunes that you will be playing and you playing style. Be sure to get a guitar that you are comfortable with. Again, if you are staring out then it is highly recommended that you start off with a reasonably priced guitar which is not too much on the pocket. You can always the high end Gibsons and Fenders when you are ready for them. I have personally seen too many people getting awestruck when they see a musician play, get the most expensive guitar they can get and then lose interest a couple months down the line. Find killer guitar deals at Guitar Finder – Ultimate Guitar Deals (Powered by Gear-Vault).

You might be reading this because you are shopping to buy your first electric guitar or buying it for someone else, or you’ve been shopping for years but were never quite sure what terms like […]